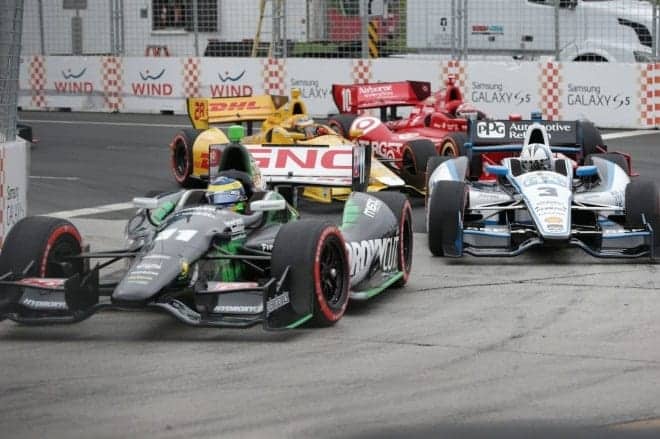 Anyone who reads my contributions to this column on a regular basis knows that I am something of a pessimist when it comes to the world of IndyCar racing.

As much as I do love this sport, I have never been afraid to point out the multitude of flaws and missteps that the leaders of American Open Wheel racing have committed over the past two decades in an attempt to steer the sport back on to the road to popularity and prosperity. Perhaps it’s all because of the time that I found this sport to begin with. I was a NASCAR boy, and as a kid growing up in the late 90s and early 2000s, the then-booming NASCAR was, at the time, the only racing I knew. I was totally oblivious to the fact that IndyCar racing was a once glorious sport that had a well-developed niche in the mainstream sporting landscape.

I found IndyCar racing in the very early 2000s, courtesy of the Indianapolis 500. The only real reason I tuned in was because a guy named Tony Stewart was also driving in the Coca-Cola 600 later that day. At first glance, the style of racing confused  me; I didn’t particularly like it at first. But as part of my ever-growing appreciation for racing as a whole, I decided to start keeping up with it to the best of my ability.

Unfortunately, the more I learned about the sport, the more it confused me. I discovered that there was not one, but two “open-wheel” series, and neither was particularly healthy. I then learned about the schism that nearly destroyed the sport in the mid-90s, and about how the sport had been trending downward ever since, to the point where if reunification didn’t happen, each “split” series would soon not be able to survive on its own.

I found this sport at a time when it was near-death. I then saw it rise from the ashes into the (somewhat) stable entity that it is today. That, my friends, is why I am so happy to be able to type out the following sentence: television ratings are up for IndyCar for the first time in a very long time.

Television ratings have been the bane of IndyCar’s existence for well over a decade. Ratings have gone down each and every year (save for the “Danicamania” period of 2005-2011) since the split, much to the chagrin of IndyCar executives determined to sell the fledgling sport to advertisers. Looking through past records, you’ll be hard pressed to find any time over the past 20 years where ratings were up year-over-year for a consistent period of time.

That, my friends, is why the numbers I am about to throw at you are so encouraging.

Race 2 of last week’s Honda Indy Toronto averaged 484,000 viewers. That is a 46% increase over the comparable race from a year ago. Most importantly, the race was the most watched IndyCar race on NBCSN since 2011 — the final installment of Danicamania.

In an age where television ratings are naturally declining for all types of events, any gain is a big gain.

The good news doesn’t stop there. The Iowa race from three weeks ago hit a two-year-high of its own for NBCSN, and overall the ratings for IndyCar on NBCSN this season have been up 46%. These are incredibly encouraging numbers. These are the kinds of increases that people who follow this sport have been waiting for.

Granted, not everything has been perfect this year for IndyCar on TV. The Indianapolis 500 saw a modest increase over its 2013 ratings on ABC, but the other ABC races have been comparably down to their 2013 numbers. Of the four ABC races this year, one saw ratings growth, two saw ratings decreases, and one did not have a comparable race in 2013, so those numbers are fairly mixed.

Of course, NBCSN is probably a better representation of IndyCar’s core audience anyway, given their commitment to Formula One and sports car coverage, plus far more IndyCar events are covered on NBCSN as opposed to ABC. Ergo, audience growth on NBCSN is essentially tantamount to growth of the series as a whole.

As for where the ratings will go from here, it’s anyone’s guess. The important thing is IndyCar, for the first time in years, is experiencing consistent ratings growth on television. Perhaps it’s a delayed response to the increased quality of the racing the sport has enjoyed since 2012. Perhaps it’s due to increased promotional efforts by title sponsor Verizon.

Perhaps there are other factors leading to the growth that none of us are aware of — yet.

All I know is, IndyCar truly seems to have momentum, and this time that perceived momentum is backed up by hard numbers. Maybe IndyCar is on the upswing after all.