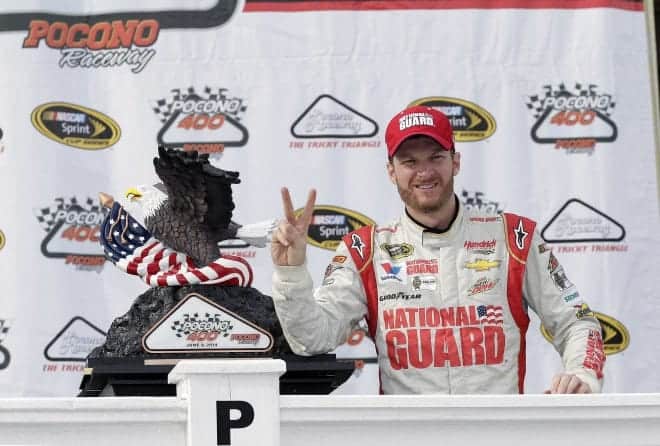 Can Dale Earnhardt, Jr. complete the Pocono sweep this weekend at Pocono?

One driver in the past capable of running off a rare winning streak in NASCAR was Jeff Gordon. He has won three or more consecutive races three times, including a streak of four straight back in 1998. It’s also notable that Gordon has won his five races at Indianapolis with three different crew chiefs.

And yes, Gordon, who will turn 43 Monday, can still drive. One thing to note about that four-race winning streak in 1998 was that the first two wins came at Pocono and Indianapolis. I’m not predicting that Gordon is going to win four in a row, but given his recent success at Pocono, and momentum from his win at Indy, it would be no surprise to see him win two straight now. Another driver who usually excels in the hot weather when the track is slick is Tony Stewart, but you know he’s not happy with finishing 17th at Indianapolis, his home track where he takes pride in running well at.

It seems too, that the guys who just love to race on dirt do well on these hot days, too. You can count Kasey Kahne, Ryan Newman, Kyle Larson and Jimmie Johnson among those as well. That’s just one factor to keep in mind when trying to figure out who you can count on when making your weekly picks.

Well, sure we have to mention Jeff Gordon here. He has one win in the last five races at Pocono and also has finished in the top 10 on three occasions, and finished eighth in the first Pocono race this year. Overall, Gordon has won six times at Pocono and has led an active driver series high 974 laps. He also has 30 top 10 finishes in 43 career races there. And consider the fact that Gordon driving now like he did in some of those years’ past, win number seven at the 2.5-mile tri-oval is a real possibility.

The driver who did win at Pocono in June was Dale Earnhardt, Jr.

It gave him one of his two wins this year and was his fourth top 10 finish in the last five races there. Junior’s average finish in those races is 9.8, which was hurt by a 32nd place finish. One of the other winners in the last five races has been another Hendrick driver in Jimmie Johnson. It’s true, he didn’t have the kind of performance he would like at Indianapolis, and sometimes how a driver finishes at Indy, also a 2.5-mile track, does translate into how things go at Pocono.

However, along with that win, Johnson has also finished in the top 10 two other times and his worst finish in those races is 14th. For his career, Johnson has three wins and has led 738 laps at Pocono, second behind Gordon among active drivers. And you know, just when we start talking about Johnson slumping, he usually steps up and wins. So, it would be no surprise to see him in Victory Lane Sunday either.

I know this may not be a popular pick because it’s the “other” Hendrick driver, but there’s a lot of reasons to like Kasey Kahne this week as well. Kahne did run well at Indianapolis and just as easily could have won as Gordon. Also, Kahne remains the lone Hendrick driver without a win this year, so you know the whole team would like to see that change. And finally, he does have a win the last five races at Pocono along with a another top five finish. So, not a bad choice here either.
MIDDLE OF THE ROADSTERS

Much like Kahne at Indianapolis last week, Brad Keselowski could easily have won at Pocono in June. He led 95 laps in that race on the way to a second-place finish, after he gave up the lead intentionally trying to remove trash from his grille — a maneuver that cost him the win and handed it Dale Earnhardt, Jr. While he hasn’t won in the last five races at Pocono, he does have three top 10 finishes in those races. For his career at Pocono, Keselowski has four top 10s in nine races, including one win and has led 140 laps there.

The only non-Hendrick driver to win in the last five trips to The Tricky Triangle is Joey Logano. Along with the win, he has two other top 10 finishes in the last five races. And of course, when you think of Pocono and Logano, you can’t help but think of his anger after getting booted late in the race by Kevin Harvick while running in the top 10 a few years back. That’s when he made reference to DeLana Harvick wearing the fire suit in the family, something the Harvicks had fun with, even though Logano did have a right to be angry that day.

Sometimes Pocono can come down to a fuel-mileage race and given their places in the standings there are a couple of drivers who could go for it if such a strategy played out.
One of those is Tony Stewart who has three tops fives and a top 10 finish in his last five races there, but not a victory. Stewart is now 30 points behind Austin Dillon, who would be the final qualifier for the Chase given there have been 11 winners, meaning the top five non-winners in the points standings would also advance. There are just six races left in the regular season, so Stewart, who has two career wins at Pocono desperately needs to get back to Victory Lane in order to make the Chase.

Another winless driver who is a bit more secure in the points standings but also knows how to win a fuel-mileage race is Clint Bowyer. He has a 22-point advantage over Kasey Kahne, who would be the first man out of the Chase at the moment. Bowyer hasn’t won the last five races at Pocono either, but he does have two top 10 finishes, with a best finish of sixth, and a worst finish of 15th.

And we can’t talk about Pocono without mentioning Denny Hamlin. He finished third in the June race, and even with the upheaval of the 75-point penalty and crew chief Darian Grubb being suspended six races, Hamlin’s record at Pocono is too good ignore. He has four wins among his 11 top 10 finishes in 17 races there, leading 667 laps in those races, too.

After having some alternate choices in recent weeks at Daytona, New Hampshire and Indianapolis, we are back to the usual suspects in this spot, comprised of the C list drivers in Yahoo! leagues.

That means you have to look at either Kyle Larson or Austin Dillon as top choices here. In June, Larson was the more impressive of the two rookies with a fifth-place finish including leading seven laps. So, he could well be a factor in this race again.
Then, there is Dillon, who raced well at Indy last week, and finished 17th at Pocono in June. What will be interesting for both Dillon and Larson is now that the Sprint Cup series begins visiting tracks for the second time in a season is to see how much they learned from the first time. So, the questions here are whether Larson and his team learned enough to contend for a win and if Dillon and his team learned enough to finish in the top 10.

A couple of other possibilities here are Michael Annett and Justin Allgaier. Annett finished 20th in the June race at Pocono and Allgaier was 27th. The key here, too, is that they each finished on the lead lap, so it’s possible they could have a slightly better day this Sunday as well.

The leader of the Frontstretch fantasy league on Yahoo! continues to be LeftTurnsOnly with 5,498 points followed by NoBarNASCAR with 5,417, Mojothemonkey at 5,316, Ace Racin’ at 5,202 and NASCAR Forever at 5,169. The biggest mover of the week was Hot Rod Torino moving up 12 spots.

The top weekly performance came from ShadowsPT with 349 points from the team of race winner Jeff Gordon, Denny Hamlin in third, Austin Dillon in 10th and Greg Biffle in 13th.