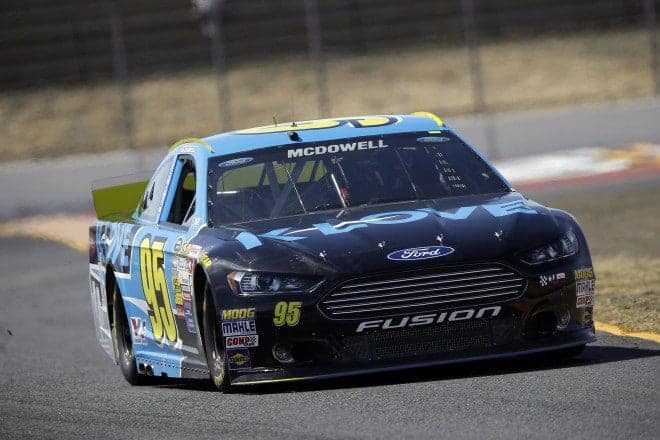 On Wednesday, Leavine Family Racing announced that Thrivent Financial, an Appleton, WI and Minneapolis, MN-based financial services company, has signed on to serve as the primary sponsor of the No. 95 Ford and driver Michael McDowell in the Irwin Tools Night Race at Bristol Motor Speedway on August 23rd. In addition, Thrivent Financial will serve as an associate sponsor in four additional races to be named later this season.

Representatives of Thrivent Financial, a faith-based company that specializes in offering services to Christians, are very happy to be onboard with a like-minded driver in McDowell.

“Our collaboration with Leavine Family Racing gives us the unique opportunity to align with a growing race team while reaching a broader Christian community through a faith- and family-first driver,” said Craig Stacey, Thrivent Financial’s Director of Content Marketing. “We are particularly drawn to McDowell’s genuine and routine interactions with his Christian fan base during which he talks about a balance of family and faith. NASCAR is a great platform to showcase how our financial experience and counsel can help members strengthen their families and the Christian communities where they live, work and worship.”

McDowell is very happy to have Thrivent Financial onboard with Leavine Family Racing.

“I’ve been impressed with the passion and growth of our team this year and Thrivent Financial is a great addition to the family,” McDowell said. “I personally believe in Thrivent’s mission to support Christians in being wise with money and living generously, and look forward to having their support for the remainder of the race season.”

McDowell has started ten races so far in 2014 for Leavine Family Racing. The team has a seventh-place finish at the Coke Zero 400 in Daytona as their best run of the season. The team previously announced a schedule of “at least 20 races” for the 2014 season. They have attempted 12 up to this point.