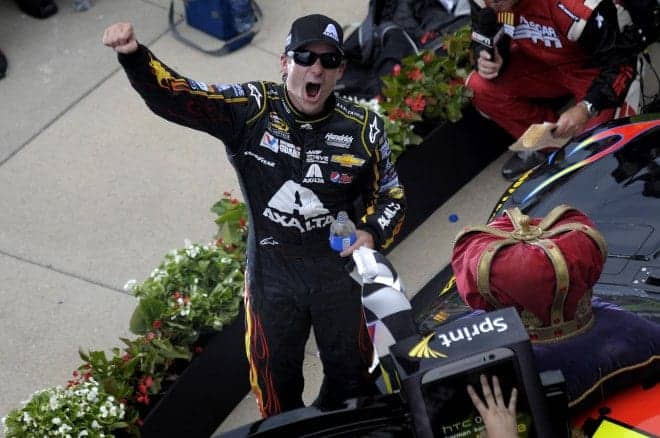 Everyone can thank Jeff Gordon for putting a stop the Ford juggernaut.  The win streak, of four in a row, was getting out of hand and some other manufacturer needed to be represented in victory lane.

There’s a couple interesting things about the string that Ford had just put together, with the first being that it had taken so long, the last being in 2001.  Perhaps lurking beneath that is how average Toyota has been this year, with just two wins, and one of those coming at the lottery known as Talladega with Denny Hamlin.  That means that Carl Edwards has as many wins himself as the team he’s supposedly joining next year.

Happiness Is… A Storybook Career.  One of the defining American tropes of American pop culture is the concept of a happy endings.  Nowhere is this idea more apparent than with American film, where happy endings are the norm from action flicks to rom-coms.  This style has been one cultivated over time and is recognized as a way to sell to a big, broad, and varied audience.  Disney wouldn’t have become the company it is without realizing this fact.  There’s a reason why they’re called feel-good stories.

It seems that Gordon has got this thing figured out.  The artist formerly known as Wonderboy is writing a story that would make Disney proud.  From his early career ass-kickery, to hitting rock bottom after his divorce from Brooke (this part should, of course, be read by the guy who narrates Behind the Music), to his rejuvenation. Few drivers, or athletes for that matter, have been able to accomplish what he has.

And so it goes, he’s putting down check marks on the to-do list before he goes out.  It began with his win at Homestead a year and a half ago, when he sent his 20-year sponsor, Dupont, out with a win at a track on which he’d never won.  It has continued since, and the elation that could be seen on his face after his fifth Brickyard win this past weekend would seem to be an excellent bookend and the ride off into the sunset moment.  A championship would do that one better — except the Chase has never been kind to him.

Happiness Is…Whew.  Silly season is over.  Yup, close the book we’re done.  With Carl Edwards rumored to be joining Joe Gibbs Racing in 2015, there is little in the way of storylines to follow with regards to driver changes.  Might an acorn of of a surprise fall from the tree and give fans something to ponder?  It doesn’t seem that way, with perhaps Marcos Ambrose and his decision to remain with Richard Petty Motorsports or go V-8 Supercar racing, left as a possible story.  Silly season, you haven’t quite lived up to your name if Edwards is the only big story.  But, oh wait, there’s more.

Rick Hendrick cleaned up any kind of curiosity that may have permeated his organization by announcing that Greg Ives would be taking over the crew chief role for Dale Earnhardt, Jr.  Good timing.  The hype from Indy is over, the series is visiting one of those hit or miss tracks for action, and so much of the focus is on the Chase.  Silly season, it was good to know you.

Happiness Is… Cheating.  NASCAR smash.  Denny Hamlin and crew chief Darian Grubb felt the weight of the NASCAR hammer come down upon them after their Indianapolis infractions.  Grubb is out for six weeks and forced to pay $125,000, and his car chief is also out for six weeks, while Hamlin is docked 75 points and drops to 21st in points.

And none of it means a damn thing.

Grubb and his minion are now able to take a six-week break where they can hang out at the shop and build the latest and greatest in cars – something that will be helpful for that playoff thing.  Hamlin doesn’t have to really worry about anything.  With his win at Talladega, he’s all but locked into the Chase anyway.

So what has this new points/Chase system wrought?  That once you’ve got a win and feel good about your chances of making the all-important playoffs, that there’s no reason not to cheat?  Heck, it’s surprising that Chad Knaus hasn’t been suspended already – though Jimmie Johnson’s recent performances might suggest that they’re working on some stuff too, but haven’t hit upon it.  When your driver is locked in, there’s leeway, and the points don’t really matter, and nor does the fine to these well-off individuals/teams, the focus is the playoffs and as long as the penalties don’t affect that, everything’s good.

Happiness Is… Those open wheelers doing their thing in their million dollar rides overseas have embarked on their traditional three-week vacation.  Yes, it’s time to go hang out with supermodels on yachts and drink champagne while gazing into the crystal bleu eau of the Mediterranean.  The only disappointing thing about Formula 1 taking a break is that the last race, at Hungaroring, was probably the best of the season.

Happiness Is… 4.  Happiness Is didn’t see the movie 4 that came out a few years ago.  The number four has been Kevin Harvick’s number for just this year.  But the reason for finding some giddiness with it is that it’s the number of races left on the IndyCar schedule.  The series hits Mid-Ohio this weekend and the championship battle is tight, with Helio Castroneves and Will Power sitting 13 points apart.  Happiness would be Ryan Hunter-Reay or Simon Pagenaud earning the win this weekend to make for an even more compelling championship.

When my dog misbehaves I put on a stern face raise my voice and say bad dog while shaking my head and waiving my arms around. Sometimes I get a little spittle flying. Of course I still feed and walk him as scheduled and five minutes after my rant we are friends again. You know now that I think of it, sort of like Nascar’s handling of Hamlin, no real penalty. Discipline without consequence. Do you suppose there is a place for me in the NASCAR Rules Nonenforcement Commitee. I work cheap and know how to pose and make a racket while doing nothing.

Ah yes the “Chad and Jimmie Show” is up to something. I don’t think it would surprise anyone if they are just mediocre over the next 6 races. Like it’s said “what’s to lose since we’re already in the Chase with 3 wins”? Why would they show their hand? Ole Chad is one sneaky dude. Hope I’m wrong but chalk up #7. The only thing that stands in the way is Talladega and Knaus will find a way to avoid any problems there. The 48 team is head and shoulders above everyone else.