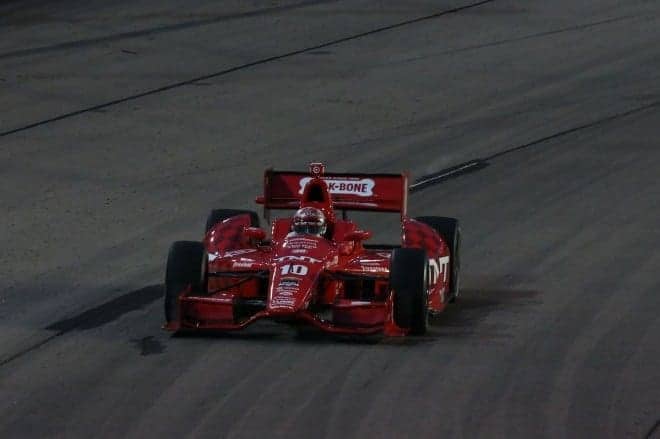 The biggest news is the encouraging upswing in the television ratings, covered by our Matt Stallknecht in this week’s Open Wheel Wednesday column.

“INDYCAR is definitely on the upswing, whether it’s ratings or putting buns in the seats,” defending series champion Scott Dixon said. “(This season) has been up and down with so many different drivers winning and even a rookie winning. It’s strong for the sport and fun for the fans to see different cars at the front. The competition is the deepest it’s ever been. I think it’s exciting.”

IndyCar will overlap with NASCAR’s race at Pocono this Sunday, so we’ll see how Mid-Ohio does, but food for thought: if the Pocono race gets spread out and turns into a snoozer, IndyCar at Mid-Ohio just might offer a good viewing alternative.

Mid-Ohio Sports Car Course is a 13-turn, 2.258-mile permanent road course. Race distance for this weekend will be 90 laps, for 203.22 miles.  Ryan Hunter-Reay was the pole winner last season while Charlie Kimball is the defending race winner. Television coverage starts at 3 p.m. ET this Sunday on NBC Sports Network. Radio coverage is available via IMS Radio Network and on XM 209/Sirius 213.

Helio Castroneves holds the advantage by a slim 13-point margin over teammate Will Power.  Ryan Hunter-Reay is doing his best to hang on but with the races winding down, he finds himself 69 points off the lead. It’s go time for him if he wants to keep his chances alive, as it is for Simon Pagenaud in fourth and just a few points behind, with a gap of 71 on the leader. Juan Pablo Montoya rounds out the top five, 105 markers off the lead.

Chevrolet holds a commanding lead in the manufacturer’s points standings, with a total of 2,066 to Honda’s 1,242.  The win totals, however, are much closer, with Chevrolet atop eight podiums to Honda’s six.

Scott Dixon and the entire Chip Ganassi Racing stable have been slowly chipping away at what ails them it seems, putting Tony Kanaan on the podium in the last three races. Mid-Ohio has belonged to this team for the last five years, and specifically to Dixon, who has scored three of those five wins for the operation. If there is a place where they can finally break through and get the first win of the season – can you believe that? – then this just may be the place. You can believe that Scott Dixon will be leading that charge.

INDYCAR is working on several different safety solutions that could be used independently or together to combat the wrist and thumb injuries that have been so common among drivers. At issue is the fact that IndyCars do not have power steering, so at times when there is wheel to wheel contact, or during crashes, even when drivers let go of the wheel or have it pulled out of their hands, they may still suffer injuries when it snaps back and hits them in the wrist or suffer injuries to the thumb when it’s pulled away.

INDYCAR is looking into a hydraulic steering damper system that has been tested on two cars so far during test sessions. It’s essentially a shock absorber that will work in concert with the suspension parts to disperse energy. They are also looking into a wrist/thumb brace that could be adapted from the ones used in motocross. A third system that could complement both of the others would be energy-absorbing material covering the steering wheel.

While the track has not been as kind to him in recent seasons, championship points leader Helio Castroneves has won twice before at Mid-Ohio and with the end of the season drawing close, he doesn’t a repeat of last year when he watched his points lead evaporate heading into the finale. The best way to insure that doesn’t happen is to win. Matt Stallknecht is also going Team Penske, but with teammate Juan Pablo Montoya. As for Huston Ladner, he’s standing by his man Scott Dixon, who has been a force in the past at Mid-Ohio and surely has to get things turned around somewhere.

Just three more races remain on this year’s calendar after this one. The Verizon IndyCar Series will have one final off week before making that three race sprint to the championship. The series will return to action on Sunday, Aug. 17, for the ABC Supply Wisconsin 250 at the historic Milwaukee Mile. Coverage airs at 3 p.m. ET on NBC Sports Network.