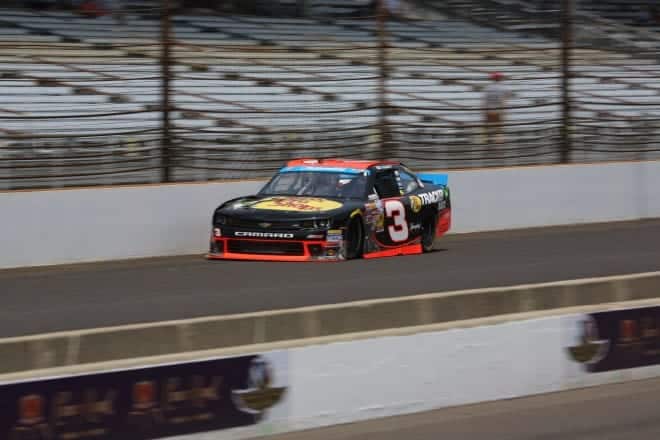 “Prime Time Ty” has quickly become familiar with having to dig deep, find that killer instinct and do what might be deemed the impossible in beating the older more experienced crowd.

Big game moments often create the heroes and the zeros. When a title is on the line or victory is within grasp, always be on the lookout for that someone who will rise to the occasion. Big time auto racing creates just as many moments, but with a lot more opportunities to either let something slip away or write an incredible ending.

Dillon grabbed yet another such moment last Saturday at Indianapolis Motor Speedway by beating Kyle Busch late in the Lilly Diabetes 250. He powered by the No. 54 on the race’s final restart and never looked back. It was his first career Nationwide Series win, and was presented the opportunity because not only of the strategy crew chief Danny Stockman played, but also because of a final caution.

“Danny Stockman gave me a piece that I felt lie I could go out there and win with from the moment we unloaded, and he put me in position to win and we did it,” Dillon told the media at Indianapolis.

It’s a stretch to say that the 22-year-old has built his resume on these moments, but Dillon is building a recurring theme. It’s a great start to what has been a relatively young career, which has yet to reach its peak but it could sooner rather than later.

Take the first one, in February of 2012, when he won the overall UNOH DIRTcar Nationals at Volusia. To do so he outran not only his older brother Austin, but also veterans Kenny Wallace and Ken Schrader — both of whom have been racing on dirt since long before either Dillon was born. Even still, the then-19-year-old upstaged them while barely removed from an ARCA championship.

Big moment No. 2 came at the Atlanta Motor Speedway, when he played the part of Kyle Busch slayer for his first career Camping World Truck Series win. While Dillon started on pole, it was Busch who led the most laps (75), including coming down inside the final 10 laps. But the youngster charged from over a second behind, and once Busch caught the wall off turn 4 it was easy for Dillon to charge past like Busch was standing still.

Would you be surprised to hear that Dillon also charged past Busch with 26 laps to go in Kentucky a year later for his second career win? Not many drivers can say they’ve gone toe-to-toe with Kyle Busch and came out first on the other side. Again, Dillon found that extra gear late and made it count, while it seems that racing against Busch brought out the best in him. Young drivers, such as Dillon, aren’t afraid to admit that while it might drive others crazy, competing against the likes of Busch or Brad Keselowski — or any Sprint Cup driver for that matter — does wonders for them. It puts them on a grand stage with a chance to play the main role.

That brings us to moment No. 3. Finding himself again pitted against Kyle Busch, it was almost as if what came next for Dillon was second nature. Of course, he had seen the movie before.

So as Busch continued to get a fender in and close, Dillon appeared unfazed. The No. 3 easily pulled the No. 54 down the long Indianapolis straightaways until he built enough of a lead that not even drafting could help Busch.

Upon leading the final 24 laps, Dillon was kissing the bricks.

“I was going to give it all I had like I said earlier,” he said. “If I had passed out going into one of these corners, at least I gave it all I had. That’s kind of the way I was thinking at the end.”

And at the end, again, Ty Dillon was the man of the hour.