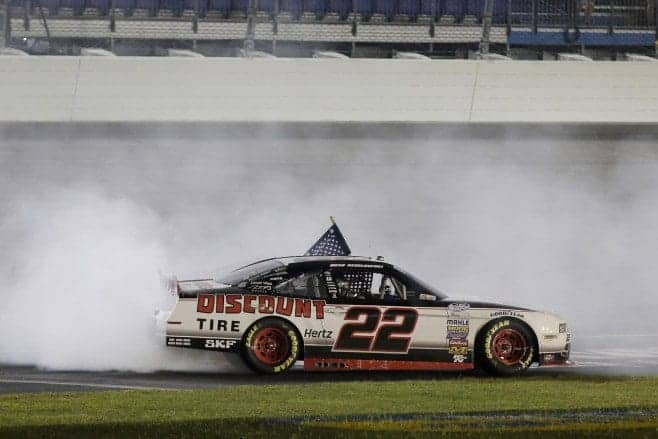 From Iowa to Pocono, Brad Keselowski never lacked in speed.

The Team Penske driver flew in from the Sprint Cup weekend at the Pennsylvania triangle and then flew to victory lane in the Nationwide Series race on Saturday night in the U.S. Cellular 250. Keselowski led the most laps (146 of 250) and overtook Michael McDowell with two laps to go to grab his third win of the season. McDowell had taken two tires on his final pit stop to take a shot at the win in his Joe Gibbs Racing Toyota.

Keselowski, however, was clearly the class of the field in the No. 22. Even with limited practice laps as he traveled back and forth, he had his Ford Mustang rolling on the high side and could make his moves willingly all night. The victory was also the third of his career at the speedway.

Trevor Bayne finished third and took home the final “Dash 4 Cash” prize. By finishing ahead of Ty Dillon, Regan Smith and Brian Scott, Bayne won $100,000 bonus for both himself and a lucky fan. He also led 31 laps on the night and grabbed his 15th top-10 finish of the season.

The point leader coming into the night, Chase Elliott, left with his advantage, though it shrank a little. The JR Motorsports driver didn’t have to worry about commuting back to Georgia for his high school graduation as he did a few months ago, and focused on a night where he ran and finished top 10 in the eighth position. He leads teammate Regan Smith by two points heading into Watkins Glen.

His second-place finish might have come because of pit strategy, but Michael McDowell had a strong top 5 car. The driver was making just his second start of the season – the first also having come at Iowa – for Joe Gibbs Racing. And it appears he has become a great go-to driver for the company when someone is needed to fill the seat. He finished seventh earlier this season and nearly stole the win on Saturday night from Brad Keselowski. McDowell has run a limited number of Nationwide races the last few seasons, but when he’s in Gibbs equipment he’s a factor for the victory. Last year in Mid-Ohio he was also the runner-up.

Rookie Dylan Kwasniewski was not in his usual Turner Scott Motorsports ride at Iowa as he took over the No. 42 usually driven by Kyle Larson. But the fresh scenery that Kwasniewski gets under the guidance of Scott Zipadelli appears to be helping as he grabbed a quiet ninth-place finish. Kwasniewski bested the finish he earned earlier this year in Iowa, 11th, by keeping the car in one piece and finding a comfortable setup that allowed him to wheel the Rockstar Energy Chevrolet into contention with the leaders.

Races can be won and lost on pit road, and while taking four tires late in an event can do more good than bad, it was the wrong call for Sam Hornish, Jr. and his Joe Gibbs Racing team on Saturday. Hornish was a top 3 car from the moment he unloaded in the No. 54, and he won the race at the speedway back in May. Running second to Brad Keselowski when the race’s final caution flew, the leaders came down pit road where most took two tires.

The Gibbs bunch put four on Hornish and he went from second to seventh for the restart with three laps to go. He charged back to a fourth-place finish, and though he might have finished no better than second had the caution not come out, the team missed out when it became a case of having enough tires but not having enough laps.

The Nationwide Series at Iowa has always been one of the must-watch events of the season. In years past this standalone event – whether spring or summer – provided the short track racing that could get everyone talking. Going into Saturday night the expectation was for a continuation of the classic battles like Ricky Stenhouse, Jr. and Carl Edwards, or Brad Keselowski and Kyle Busch.

But it wasn’t just about the finishes; it was about the racing. Saturday night that lacked in Iowa, as it was another ho-hum Nationwide event. There was none of the tight racing, or using each other up, to go with the overall excitement that should have been around every corner. While it wasn’t complete domination by the leaders up front, the storylines were few and far between during this one, and it didn’t seem like the Iowa Speedway that is known and loved.

Josh Berry made his Nationwide Series debut this weekend with JR Motorsports and did exactly as expected for a young driver in that caliber of equipment. Berry practiced and qualified the No. 5 in the top 16, the equivalent of what he ran throughout the night. The hype surrounding the late model driver was palpable from the individuals involved all weekend, and his 12th-place finish seemed to solidify the decision of his hiring. Berry stayed amongst the leaders and out of trouble, all in the name of learning. No word on if the 23-year-old will get another chance behind the wheel for the organization that he’s won races for already this season, down the road.

2 of 40 drivers in Saturday night’s race will fly to Pocono for Sunday’s Sprint Cup race.

Should it be the last time that Brad Keselowski gets to race at Iowa, he went out in dominating fashion. By leading the most laps on Saturday night and grabbing the victory, it took away the maximum points that a Nationwide Series regular could have earned on a night where they only had two Sprint Cup drivers to deal with.

But Keselowski’s victory, and another top-10 run by Chase Elliott, keeps the championship picture with little movement. His teammate still runs behind him and now within arms length. Chances to make some ground up, however, will come within the next two weeks as road courses sit back-to-back.

Watkins Glen and Mid-Ohio are next on the schedule as the Nationwide Series rolls on and for as clam as the championship fight has been, the twists and turns of road courses can certainly change that very quickly.

I was truly hoping Bayne could have pulled off the win. At least he got a top-3. I was hoping better for Chris Buescher and Ryan Reed. I know a Cup driver won, but, at least he was driving a Ford. And he was honest when he got out of the car, acknowledging that the fans don’t like the Cup drivers in the Nationwide Series, and would have preferred Ryan Blaney driving the 22. But, Blaney is in the thick of the Championship battle in the Truck Series, and had to race in Pocono a few hours before, so it wasn’t possible for Blaney to drive the car. Overall though, it wasn’t that bad of a race. The crowd looked decent too.

Cross your fingers Brad. Maybe NASCAR will see the light, dump the joke called The Brickyard, replace it with a Cup race at Iowa, and you can return to there sooner than you expected .

I was happy he had the pole and a good finish. And Ken would you like Lucas Oil Raceway to be a NASCAR Cup track instead of the Brickyard or are you an Iowa fan?

racefangurl, I like Iowa. Yes, I said they should replace the cup race (and Nationwide race) at the Brickyawn with a cup race at Iowa, but, they could send the Cup guys to Lucas Oil Raceway, and to Iowa the next week, replacing Pocono. Get rid of two boring tracks and replace them with two short tracks. I have never been to Iowa, but I have been to LOR. The race I attended at LOR was a great race. All they need to do is replace those wooden bleachers.

A short track race on a beautiful summer evening in the heartland. I was really looking forward to it. What I got was another deadly dull non race dominated by a driver that should not even been there. I never watched the movie Titanic. Why bother, I know how it ends. The NW series is getting that way.

I didn’t think it was that bad of a race. Granted the race was won by a Cup driver, but there was some good in-racing. Kelly, I guess if Trevor had finished last ,you would have though it was a good race.