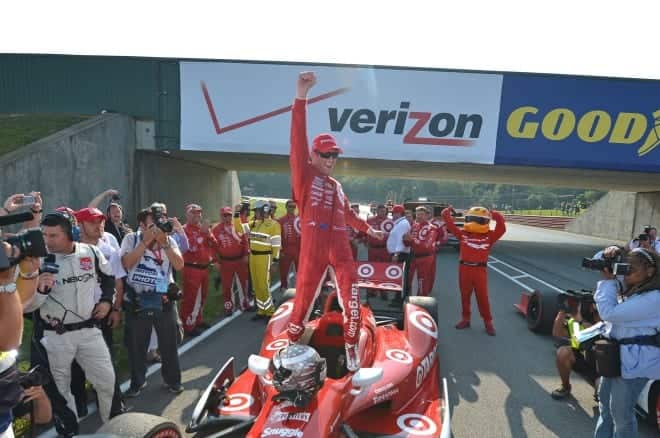 In a Nutshell: The race began with a bang as drivers eager for the green flag got a bit excited as they hit the gas.  The wreck brought about a rare caution for IndyCar at Mid-Ohio.  Scott Dixon cruised home for the win, his fifth at the track in the last eight races.  Polesitter Sebastien Bourdais earned second, followed by James Hinchcliffe, who got his best finish of the year.  Carlos Munoz took fourth, and Graham Rahal followed in fifth, getting a much-needed positive result.

Key Moment: A Mid-race caution for Ryan Hunter-Reay changed all elements of strategy. Dixon stayed out as the leaders drove to the spits and inherited the lead.  The move catapulted him from being the driver who started last on the grid into a spot to hold toward the victory.  Dixon was helped by Josef Newgarden and his pit road infraction, plus the fact that he could stretch his fuel mileage to a point that he could make enough of a gap

-Well, that was an ugly start.  Whether it was Tony Kanaan’s fault or not, the start to the race looked like calamity as both he and Marco Andretti found themselves out of the running from the get-go.  Kanaan spun just after the green and then had Andretti punt him.  The stack-up behind them jumbled the field and affected the overall running order for the whole of the event.

– Helio Castroneves started the race by sitting in the pits.  The points leader found one of those electrical gremlins eating at his car.  The team reported that it was a throttle position sensor, but it was an inglorious beginning for the ever ebullient Brazilian, as it set him four laps down before the race had really even commenced.  Castroneves wound up 19th.

– Hunter-Reay also suffered through a frustrating race.  First, he sped on pit lane while coming in for service early in the race.  Then, just before the race’s midpoint, he spun off the track in a moment of driver error, that put him a lap down and dropped him in the finishing order.

– Takuma Sato. What to do with he and his team?  He has more DNFs than any other driver this year, yet continues to show speed at nearly every track on the schedule.  He’s been wrecked, he’s made mistakes and at Mid-Ohio, he too was bitten by mechanical gremlins that felled any chance at a good result.

– Total team effort.  While the driver is credited with the win, it takes a team to make them happen.  Nowhere else was this concept more evident than with Newgarden.  He held second position and looked like he had the promise of bringing a win for Sarah Fisher-Hartman Racing when he ran over an air hose in the pits to not only slow his pit stop but also incur a penalty that ended his hopes.

– Will Power started fifth and ended up sixth.  That’s kind of a ho-hum day, but it’s also the kind of day that was just what he needed.  With Castroneves and Hunter-Reay both having their issues, Power’s result puts him atop the championship standings.  Sure, it’s only a four-point lead, but it’s still a lead, and it has to feel encouraging as the season races to its conclusion at the end of August.

Notable Driver: James Hinchcliffe.  Amid speculation about whether he will remain with Andretti or move to another team, the Canadian driver earned his best result of the season with an impressive race.  He and his team have been a mix all season long, as they’ve shown flashes of speed and led races but have not had the results to match.  At Mid-Ohio, Hinchcliffe made an opportune move at the drop of the green flag and launched himself into a position to contend.  Though one race might not change his fortunes at Andretti, it is not known whether he’ll be leaving, it does act as a reminder of his abilities and possibly an audition for next year.

Scott Dixon: “Truthfully, I didn’t think it was possible, great pit stops by everybody on Team Target and the strategy was spot on once we got that (lap 37) yellow. Long, hard-fought day but huge thanks to Chevy and obviously we got fantastic fuel mileage there, too.”

James Hinchcliffe: “That start was pretty crazy. Going down into turn four there, it was like the seas parted in front of me. I felt bad for the guys that got involved in that wreck, but it allowed us to get up there a little bit.

Will Power: “Proud of the Verizon Chevy boys today. As far as the standings go, we have a small lead but the key from here on out is to finish ahead of the other guys week in and week out.

What’s Next: The oval of Milwaukee Mile is the next track up and is one of three races left on the schedule.  The series takes a one-week break before commencing its championship run.  The ABC Supply Wisconsin 250, will be on Sunday, Aug. 17, at 3 p.m. ET and will be shown on NBC Sports Network.