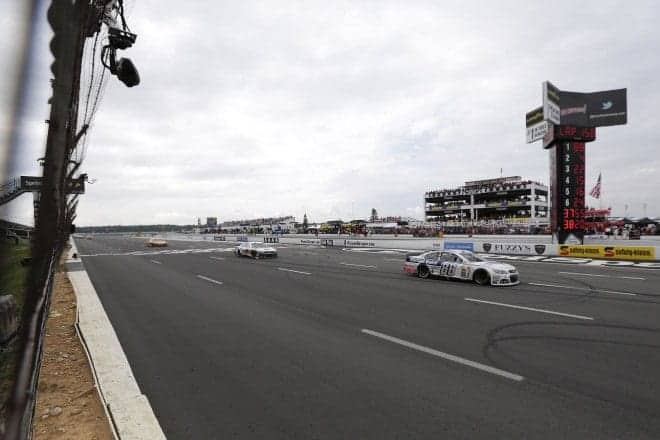 If Kevin Harvick is NASCAR’s “Closer,” then Earnhardt knew how to close the door in 2013 with a museum full of missed opportunities that lingered during his climb back to respectability at Hendrick Motorsports. A driver with a career spanning more than a decade, and aligning himself with the sport’s most successful team, had skipped class on racing’s most basic philosophy: How to Win.

But in the midst of crew chief Steve Letarte’s final season, a rapidly maturing Earnhardt has made clear he’s sat, studied and is ready to graduate to the school of championship contention once more.

Sweeping Pocono Sunday, the first time he’s won both races at a track in one season since 2002, Earnhardt appears primed and ready to give the Chase his best shot. It’s the first time since 2004 he’s won three races or more – only the third time in his 15-year career – and his 10 top-5 finishes lead the circuit.

Most importantly, down the stretch of these races, Earnhardt is learning how to finish up front rather than succumb to the pressure of those behind him.

Of course, he’s not the only one that sees it. Even rivals acknowledging the change in driving style.

“It’s cool to see [Earnhardt] running the way he is,” Clint Bowyer said after finishing fourth. “What a change in that dude.”

This Sunday’s Pocono finish was a prime example. Earnhardt, with the faster car, was faced with holding off the wreck-damaged car of Harvick during a final double-file restart. Yet over the race’s final three laps, Harvick was glued to Earnhardt’s back bumper, trying every which way to unsettle the No. 88 car. As little as three years ago, that would have been a recipe for disaster, even with the cards in Earnhardt’s favor. The driver would make a mistake, bobble, settle for second (or worse) and leave wondering what might have been.

Instead, Earnhardt drove down like a daredevil into the corner ahead of Harvick into turn one with the determination not to lose. It’s the same way he stuck behind Brad Keselowski in June, just close enough in second to the No. 2 car to pressure a former series champion into making a mistake. Earnhardt’s Pocono success in both circumstances is wiping away doubts about his ability to close out victories.

“The pressure’s on that last restart, when you got Kevin lining up beside you,” he explained. “I knew how confident Kevin was going to be going into turn one and I had to have that same confidence in my car. Mano‑a‑mano, guy vs. guy, he’s going to be brave and I got to be brave.

“So I knew that I couldn’t, I didn’t want Steve and those guys, they’re watching it, and you know everybody else on TV is watching, so you got to drive it in there.”

It’s that determination not to let down the most important people close to Earnhardt that has driven him so often in 2014. Saturday, instead of prepping for the race or taking off on his own, the driver participated in a paintball match with his team. On Sunday, acting like a 5-year-old kid in a candy store, both he and crew chief Letarte emphasized 1,000 times all the people that have made them successful. Rick Hendrick. The engineers. Even the smallest guy on the crew.

That focus drives Earnhardt’s confidence, which helps him get that extra 10 percent out of both the car and himself. It seems more than perhaps any top-tier driver that happiness off the track literally gives him extra physical ability once he’s on it.

“I was really close to the guys on the [No.] 8 team,” he said, comparing his current situation to Dale Earnhardt, Inc. “Obviously, a lot of those guys are family. I still have great relationships with them. But I think I’m smarter about my friendships now. When I was younger, it was more about, how can this help me or it was a little ‑ I was not as concerned about helping them and being their friend as I was about them being my friend. So I think I’m better at being a friend these days.”

So gone is the moodiness, the frustration that stopped NASCAR’s Most Popular Driver from moving forward. In the past, this whole week could have been problematic for Earnhardt. The selection of his 2015 crew chief, Greg Ives, is a reminder of how quickly the clock keeps ticking for that working relationship with Letarte, change that he’s always found hard to handle. Instead, the driver showed a zen attitude through much of the weekend, putting his trust in Hendrick GM Doug Duchardt and crew chief guru/shopmate Chad Knaus to select his “head wrench of the future.”

“I didn’t want to be in the middle of choosing that guy,” he admitted Friday. “I just wanted to sit back and watch. I didn’t want to have to sit there in limbo… I trust them to make the better decision than I could have made.”

It’s an attitude that could have meant trouble, back in the old days. After all, who wouldn’t want some input on a co-worker you’ll see more than your dogs, your girlfriend and your family over the next several years? However, as the weekend unfolded – and especially Sunday – Earnhardt proved there’s a difference now at age 39, compared to the Tony Eury, Jr. years at Hendrick Motorsports. While Letarte has become the perfect cheerleader, a match to boost Earnhardt’s spirit, you only need to do so much when your driver’s already injected with confidence. Ives, an engineering type, will never have that same personality, but the truth is it isn’t needed. Earnhardt could sit out of this crew chief search because he’s ready to graduate from his support system and lead. Whether it’s Steve the Robot or Stevie Wonder on top of the pit box, he once again believes winning is possible under any circumstance.

“You’re in the car and it’s not working, you just carry a lot of frustration and you just bite your tongue, bite your tongue, trying not to be a fool on the radio,” he said. “Everybody in the pits and on the box is trying to help you and they’re the only ones that really you can complain to, so you really have to choose your words.

“You beat on those guys and they don’t want to help you any more. So you got to… you just got to wait and they’re going to try to help you when they get the opportunity and you got to be patient and wait for that pit stop or wait for that chance to come on pit road for them to adjust.”

The driver now carries that belief full time. And that’s why Sunday, the No. 88 car could stay in control when it counted. Earnhardt’s car was even with Jeff Gordon’s, who led a race-high 63 laps but never could get the track position the No. 24 was gifted with from the start. It was Letarte’s strategy that put Earnhardt in position, a fuel-only final stop while Gordon took four tires. The driver had the confidence to take it from there.

“After last year, I thought well, the only thing we’re not doing is winning,” Earnhardt said. “This year, we have been winning… and continuing to run consistent. Even though the rules are changing, we’re understanding what we’re seeing, what we’re needing.”

“It’s been our goal for four years to be disappointed with a top 10. To consistently perform to the point that we have higher expectations than where we started,” added Letarte, who had the luxury of a Chase spot secured but refused to sit on his laurels. “I think that’s continued.”

As the haulers packed up Sunday, peers were found complimenting Earnhardt the driver as much as the man. Fans looking for autographs were talking about the way in which he drove as much as his personality. Teammates were acknowledging his ability to be their biggest rival in the postseason.

In the final stages of his rebuilding process, Earnhardt was being treated as a different kind of equal. Perhaps that’s the biggest compliment to him in his best season with Hendrick: the famous last name has melted into the background in the face of raw driving ability. Earnhardt on the track is many things, but most of all, he’s simply a real threat to win every week.

Victory, in all forms of the word, is finally his.