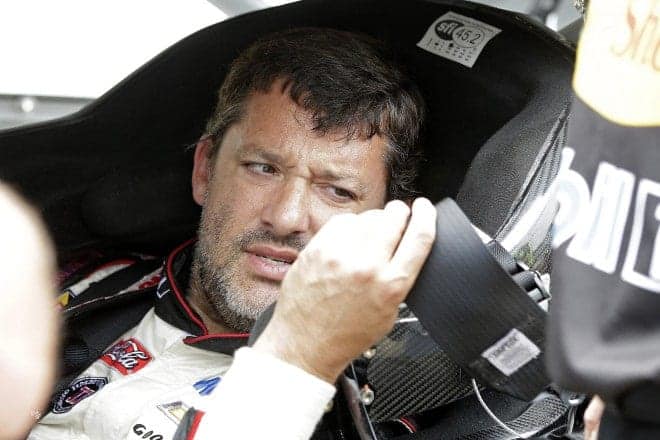 ONE: Will Dale Earnhardt, Jr. remain strong this season?

Fresh off the No. 88 team’s sweep of Pocono, Dale Earnhardt, Jr. and outgoing crew chief, Steve Letarte seem to be “firing on all eight cylinders” as Junior stated after their victory at the GoBowling.com 400 at Pocono Raceway on Sunday. But the question remains, with five races to go until the chase, then the grueling ten-race finish of the new Sprint Cup Chase format, will Dale, Jr. be able to remain running up front, continuing to gain valuable points, and possible secure another victory?

This ‘swan’s song’ that Earnhardt and Letarte are singing right now, before Letarte leaves Hendrick Motorsports for the broadcast booth with NBC Sports at the conclusion of this season, has given Junior the greatest amount of confidence and drive to win than any other point in his career, which spans 16 years, two different teams, and 22 Sprint Cup victories. Junior Nation has never been so convinced that their driver will compete and win his first Cup championship this fall at Homestead-Miami Speedway. Only once before in the 39 year-old driver’s career has he accumulated this many wins, this quickly, having six victories back in 2004 with DEI.

Now that the announcement that the motorsports world was waiting with baited breath for, of Greg Ives taking the reins of the No. 88 shop next season, last week, Dale Earnhardt, Jr. can focus just on the task at hand – driving for a title. He and Steve Letarte will have plenty of time to reminisce about their time together, spanning four seasons, since 2011. But right now is the time he, Junior and the No. 88 team need to buckle down and really focus on their approach to NASCAR’s version of the “playoffs” starting next month.

TWO: Where is Smoke?

One of this season’s biggest surprises thus far, besides the resurgence of Dale, Jr., has to be the lack of consistency and competitiveness out of the No. 14 camp. Tony Stewart and the No. 14 Chevy SS have not won a race this season, and the team has only posted two top-5 finishes this year, at Bristol and California, which, at this point, seem like an eternity ago.

What is holding back the performance of the normally very competitive Stewart in 2014? Many have raised the question if the relationship between the three-time champion and first-year crew chief, Chad Johnston may be one of the issues. Or is it the fact that Smoke has had three different people, with three different personalities and methods on top of the No. 14’s pit box in the last four seasons?

But what about Stewart’s health? He has said he’s fine, and it’s not his repaired leg that is holding him back from being successful this season. But it is hard to ignore the limp as Tony Stewart walks down pit road to his car every Sunday. Because of his injuries in USAC Sprint Cars he withstood in 2013, Stewart’s driving leg was impacted. Could the injuries still be healing, and is driving at this level just not the same anymore for Smoke, who is known for his aggressive style of driving? It’s hard to tell, and only he knows the answer, but one thing is for sure, this fall, if Tony Stewart is not in the Chase, it’ll be the first time since 2008 he has not appeared in the post-season, an odd notion for a man who has been such a dominant driver over the past decade in this sport.

THREE: What’s the latest on Joe Gibbs Racing and a new team in 2015?

It has been confirmed by the team that Joe Gibbs Racing will in fact field a fourth team in the Sprint Cup Series next season. The driver who will be in the seat of this new Toyota Camry has still not been revealed, but all sources clearly lead to one man. Carl Edwards.

Edwards, 34, has already rejected offers from Roush-Fenway Racing to stay in the No. 99 Ford next season, and has said that he’s confident in his decision to move on with his career. He also has made it clear that he does have a deal lined-up for 2015, but won’t say where until later this season. It’s even been reported that he ‘had talks’ but rejected an offer from Richard Childress Racing to join his team of Chevys.

How will JGR, a team that has had its struggles this season with its three cars (No. 11- Denny Hamlin; No. 18- Kyle Busch; No. 20- Matt Kenseth), adapt to adding an entire new team to the stable and still focus on improving performance at the track? Hamlin and Busch are both in the Chase this year with one and two victories, respectively, but have fallen off in terms of competition as of late. The aforementioned Kenseth, well he’s been all but non-existent all season long, posting eight top-5 finishes, but no wins coming off a banner 2013 season with seven (a career high). Will adding Edwards to the fold at JGR change the game for this team in ’15, or will ‘Cousin Carl’ experience growing pains starting fresh with a new team, new personnel, and new equipment?

Speaking of Roush Fenway Racing, this past week an announcement was made by the team that they would bring back veteran driver, and former Roush teammate, Mark Martin as a Developmental Driving Coach. For nearly 20 years, Martin drove Fords for Jack Roush, finishing his career with the organization (1988-2006) with 35 victories in the Sprint Cup Series, and a total of 96 wins in all three major national NASCAR touring series.

Coming home is what Martin is doing, bringing his wealth of knowledge and experience behind the wheel of a race car, his life’s work, in a combined 882 starts at the highest level of NASCAR racing. Remove the victories by Carl Edwards in the No. 99, and RFR has struggled this season. Currently the No. 16 of Greg Biffle is projected as in the Chase on points, but that could change over the next five races. What RFR needs is Mark Martin to help develop along their young talent in Ricky Stenhouse, Jr., a driver who has a Nationwide Series title, and Trevor Bayne, a Daytona 500 Champion. RFR also has talent coming through the pipeline in their Nationwide program currently with 20 year-old Ryan Reed and 21 year-old Chris Buescher. It won’t be easy to fill the void that will undoubtedly be left by Carl Edwards, but having the support and knowledge of a time-tested veteran like Mark Martin back at Roush will certainly help.

FIVE: Can Ambrose make the Chase at Watkins Glen this weekend?

Or is it too little, too late for the 37 year-old, Australian-native? Ambrose has a combined five victories at The Glen, three in the Nationwide Series, and two in the Sprint Cup Series. This weekend he’ll take on the challenge of both races for Richard Petty Motorsports in the No. 9 Ford Fusion in the NSCS, and the No. 09 Ford Mustang in the NNS race on Saturday. It’s no secret that this weekend is more than likely Marcos Ambrose’s last chance at making a coveted Chase slot, as the seven-year Sprint Cup Series veteran driver likes road courses, after coming to the United States from the V8 Supercar Series down under in Australia.

Ambrose has won two V8 Supercar Championships in 2003 and 2004 with Ford. A feat that one NASCAR team owner is rumored to be interested in. Team Penske owner, Roger Penske has been rumored to be in talks to form a V8 Supercar team in Australia, after Penske has made efforts to expand his various trucking and shipping businesses to the country. According to multiple sources, Penske’s top choice to pilot his V8 Supercar is Ambrose, who has made comments that he would like to make a return with his family to his homeland at some point in his career.

Could this Sunday be the last time we see Ambrose in a NASCAR victory lane? Can he pull off a win and get both RPM teams (the other being the No. 43 of Aric Almirola) in the Chase for the Sprint Cup? If history repeats itself, the driver of the No. 9 machine certainly has the odds with him.

You left out starting a fourth team at SHR as a possible reason for Stewart’s lack of performance. Especially given the fact that Haas did it without Tony’s buy-in.

Michael in SoCal
Reply to  Bill B

The new team, combined with recovering from his leg injury. I’m not surprised that the 14 is struggling. That said, what him turn it on with an end of summer tear.

I thought I saw Carl Edwards in a kimono with his face painted white. Do you suppose that means anything?

I’m not a SHR fan and I’m glad tony hasn’t been good but harvick is carrying the team. Seem like the other 2 drivers could use what the 4 is doing. The 10 car is out there for Go Daddy money only.