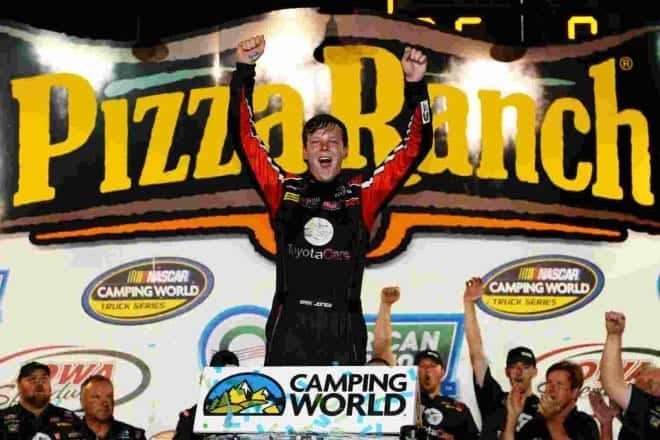 Erik Jones shocked the short track racing world in 2012 at the age of 16 when he outdueled Kyle Busch at his own game in a thrilling finish to the annual Snowball Derby at Five Flags Speedway in Pensacola, Florida. Months later he was hired to drive for Kyle Busch Motorsports and continued to turn heads when he outran Chase Elliott in the Winchester 400. Jones continued to impress, beating drivers with more years of experience for his first career NASCAR Camping World Truck Series victory at Phoenix International Raceway, and inheriting his second straight Snowball Derby win after the disqualification of Elliott. Where did this teenage driver come from and how has he handled such quick results?

Aaron Creed: You have achieved a lot of success in relatively a short amount of time. Do you still think about how amazing it is some days and how it has led to the opportunities you have today?

Erik Jones: It really all started there at the first Derby and that kind of got me the opportunity in the Truck Series and that led me to doing some more Late Model races with Kyle. I really do think back to that Derby a lot, think man that’s pretty cool and that started it all. At the same time we’re always looking forward to try to go and achieve more and have more success. It’s definitely fun to look back on the wins and see what you’ve accomplished, but at the same time you’re always looking forward and trying to do more.

Creed: Looking forward, what are the goals? Keep winning races?

Jones: That’s definitely my goal. Try to win more races, and then try to win the owner’s championship towards the end of the year. It’s a tough thing to win races in the Truck Series. It’s not easy by any means. We’ve been fast all year. We’ve had fast Tundras. They’ve been definitely winning a lot of races in the Truck Series so hopefully I can contribute some more to that.

Creed: With all the success Kyle Busch Motorsports has enjoyed in the Truck Series the last few years, is there any pressure on you to perform at the top level or is it more about doing your personal best?

Jones: I don’t think I try to put too much pressure on myself. I’m in a truck that can win every weekend and I think that’s an advantage to me knowing that I can go to the track and compete for the win. I try to do the best I can and do all I can control, but at the end of the day I can only do so much and as long as you are doing what you can, I think that’s the best you can do.

Creed: Can you put into words what it means to be a part of this organization and also how remarkable of a streak Toyota has going in the Truck Series so far this year? (This interview was conducted prior to Chevrolet driver Austin Dillon’s victory at Pocono.)

Jones: I’m just proud of it. I started here last year for five races, but this year we really have stepped it up. With Toyota and KBM altogether, now we have really shown how much work we have put into it so it’s cool to be a part of it in this last year and a half. I’m lucky to represent KBM.

Creed: How much are you able to lean on the expertise of your teammates Darrell Wallace, Jr. and especially Kyle Busch?

Jones: Quite a bit. I’ve leaned on Kyle now really since my first truck race and even more so this year. Darrell as well. We’re always at the same track and kind of go through what we’re each doing and how we’re going to make each other better. Having a teammate like that, both Darrell and Kyle, has been a big help to me. Getting advice for these places I haven’t been to and just trying to figure out what I’m trying to get out of my truck.

Creed: Rewinding back a little, growing up in Michigan how did you first get involved in racing?

Jones: I’m not from a racing family. Actually, my mom read an article about quarter midgets in Racing for Kids when I was probably six, and then when I was seven we actually started doing that. It just kind of took off from there. I really just enjoyed it from the start. My dad took a liking to it as well, and he decided that we could move up and went to Street Stocks, Late Models, and then ended up here.

Creed: Since you have only recently turned 18 are you getting to spend more time at the shop now in North Carolina, and do you still get to continue enjoying teenage life with friends in Michigan?

Jones: I have a pretty good balance of both. I bounce back and forth quite a bit between the two. I definitely have been spending a lot more at the shop, the past month especially since I’ve been racing so much. I still go back to Michigan as much as I can and hang out up there. I’ll be probably making the move full time down to Charlotte here in the next year or so. Definitely I think it’s cool to be able to focus on racing full time as much as I

have been and looking forward to the future.

Creed: For us short track followers, will you be running some of the bigger shows for KBM again later in the year?

Jones: I’ll hopefully be at the Winchester 400 and definitely at the Derby. We’re working hard on that to try and get there so I’m looking forward to them both. Two races that I really enjoy, two tracks that I really enjoy. Always fun to get in a Super Late Model and try to go out there and win the race.

Jones: Yeah, definitely. There’s less and less time, but there’s always time for it. Kyle still runs a few Late Model races each year, so hopefully I can stay involved. I’d love to go and run Super Late Model races as much as I can. I really love doing it, and enjoy racing those cars. Still to this day some of my favorite cars to drive.