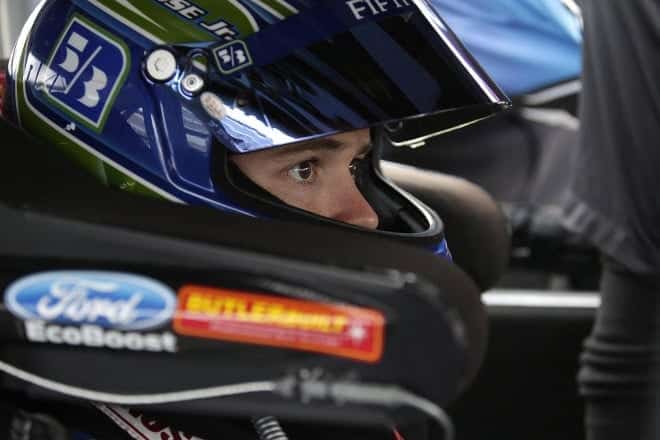 Did You Notice? … How hard it is to gain a foothold in this sport? More than ever, talented drivers find themselves inside a shrinking window of opportunity. The number of available rides has shrunk, combined with the funding now necessary to pair them within a top-tier organization. Having cash on hand and helping bridge the gap of corporate support can now make the difference as to whether you simply get a job. NASCAR’s purse doesn’t pay the bills; heck, in Pocono this weekend the runner-up finisher, Kevin Harvick, made nearly $10,000 more than Dale Earnhardt, Jr. So why focus on what your results are as an owner, then, over how much a particular driver (also your fundraising employee) can bring to the table?

It’s a problem well-documented when it comes to ownership, as the costs have skyrocketed out of control. But how does that affect the driving talent underneath? I took a look at the Rookies of the Year from the last seven years in the Sprint Cup, Nationwide and Truck series to see how their careers have worked out within the sport. Just so we’re clear, that runs parallel to the decline in Nielsen ratings and at-track attendance the sport has suffered under the current contract.

Sprint Cup Rookie Of The Year

2008: Regan Smith. One Cup victory in a career still marked more by the one taken away (Talladega, the infamous yellow line pass of Tony Stewart) than what he’s actually accomplished. 2014: Out of Sprint Cup (running the Nationwide Series full time)

2009: Joey Logano. Easily the most successful of this bunch, although many years were wasted in a Cup ride never suited for him at Joe Gibbs Racing. 2014: Sprint Cup championship contender, multi-race winner with Penske Racing.

2010: Kevin Conway. Remember the Extenze sponsorship? A whole bunch of lawyers do. 2014: Out of NASCAR.

2011: Andy Lally. The sports car expert works wonders behind the wheel of an IMSA machine, but those skills never translated elsewhere. 2014: Out of NASCAR, save for Nationwide Series race earlier this year at Road America.

2012: Stephen Leicht. Remember when this guy was going to save Robert Yates Racing a decade ago? Casey Atwood always takes the spotlight away from these other “young guns” that fell off the face of the earth. 2014: Out of NASCAR.

Totals Now: 3 of 7 drivers still full-time in NASCAR (only two in Sprint Cup). 2 Sprint Cup winners. Only 1 (barring a miracle) will make the 2014 Chase.

Before moving on, let’s compare that to Rookie of the Year totals from the seven years before that, the sport’s “golden era.”

Totals Now: 7 of 7 drivers still full-time in NASCAR (all in Sprint Cup). All have won multiple times in the sport. All seven could make the 2014 Chase (with only McMurray and Kahne in real danger of missing out.)

Moving on to the Nationwide Series…

2008: Landon Cassill. Once viewed as Jeff Gordon’s successor (remember when Gordon was retiring at 40?) the right opportunities never opened up at Hendrick Motorsports, so his Christmas reward was a pink slip. Has scratched and clawed every which way to stay in the sport since then. 2014: Running Cup, full-time for Hillman Racing and full-time in the Nationwide Series for Johnny Davis. Without the equipment to truly contend in either scenario.

2009: Justin Allgaier. A Roger Penske protégé, he persevered after being released from the program and is trying to build a future elsewhere. In an enviable position within the sport right now: aligned with a smaller team that has potential for expansion, both financially and on the racetrack. 2014: Running Cup, full-time for Phoenix Racing.

2011: Timmy Hill. When your claim to fame in Cup is slamming into Matt Kenseth like you weren’t looking at Bristol there’s still a ways to go. 2014: Running Cup, part-time for underfunded owner Joe Falk.

2013: Kyle Larson. Jeff Gordon called him a driver that comes around “once in a long while.” Thank goodness, as you’ve seen by this list we’ve been developing. 2014: Running Cup, full-time for Chip Ganassi Racing and leading the Rookie of the Year standings.

Totals Now: 6 of 7 drivers full-time in NASCAR (6 in Sprint Cup), while the seventh is part-time. 1 of 7 (Ragan) has won a Cup race. Only Larson and Dillon are in serious contention to make the Chase.

It’s not as bad as the Cup level, but still filled with drivers seeking employment at teams where they’ll actually have a prayer of running up front. The drivers who won earlier this century don’t have that same problem…

Totals Now: 4 of 7 drivers full-time in NASCAR (4 in Sprint Cup), while a fifth (Stremme) is part-time. 4 of 7 have won Cup races. At least 3 of 7 will be in the Chase, while Biffle holds the last postseason spot at press time.

Last but not least, let’s look at where most agree the sport’s on-track competition has remained a “driver’s dream:” the Truck Series. With races like Eldora on the schedule, sponsorship can only take you so far within this division as your skill set needs to shine through at a wide diversity of tracks.

2007: Willie Allen. Willie who? Was swept aside quickly, with few opportunities after one season running for ThorSport. 2014: Out of NASCAR mostly, but has ran occasional Nationwide and Truck Series races.

2008: Colin Braun. Became the odd man out when Ricky Stenhouse, Jr. started performing at Roush Fenway Racing. Apparently, no scouts were waiting to see who finished runner-up. 2014: Out of NASCAR.

2009: Johnny Sauter. A weird driver to win this award, as by then Sauter had failed stints in both Cup and Nationwide. Has found a home in the Truck Series, part of a dying breed of drivers that were fine being successful beneath the Cup level. 2014: Full-time in Trucks for Thorsport.

2011: Joey Coulter. Trying hard to stay funded and functional, although the stats have never lived up to the sponsor money he brings to the table. 2014: Running full-time in the Truck Series for GMS Racing.

2012: Ty Dillon. Another well-funded driver with one extra advantage in that, like big brother Austin, his team owner is also his grandfather. 2014: Running full-time in the Nationwide Series for Richard Childress Racing.

2013: Ryan Blaney. Currently contending for a championship, in his second season it does appear this son of Cup driver Dave is the real deal. 2014: Running full-time in the Truck Series for Brad Keselowski Racing.

Totals Now: 5 of 7 drivers running full-time (1 in Cup). None of them have won a Cup race or made the Chase.

This group holds up the best, over time compared to their counterparts from the earlier part of the century.

The conclusion on paper is clear: talent hasn’t naturally flowed through NASCAR’s system the way it used to. The question is whether that’s just a correction back to “normal” development – after all, not every driver to step behind the wheel will be a Hall of Famer – or whether the evolution of the sport has slowed.

I’d vote for the latter. These drivers coming up through the ranks have fewer opportunities to succeed against established competitors with better equipment. Patience for owners they’re driving for are razor thin, as one of two scenarios come into play. It’s either A) the team is running race-to-race, with patchwork funding in order to survive or B) it’s a well-funded group, with Cup connections where anything less than multiple wins and a championship is a disappointment. That environment, with no “in between” allowing for multiple years of development, has killed off several potential superstars.

Just how many, we’ll never know. But with the sport suffering through sagging ratings, Kyle Larson can’t be the only one defying the odds and rising up to Cup. Brad Keselowski can’t be the only rags-to-riches story, getting noticed with an underdog program and then moving through the ranks. There has to be more.

– Kyle Busch has three runner-up finishes in the last five races. The other two? DNFs. That, in a nutshell is why he’s never become a serious Chase contender. This team has to find a way to build consistency.

– While we’re on the topic of Joe Gibbs Racing, Denny Hamlin had some choice words for their horsepower while sliding through the field late at Pocono. (While sliding back through the field, late: “You can thank horsepower for that. &*(*ing getting run over.”) I know Hamlin is an emotional guy, and his week was tough to swallow after a P5 penalty cost him both car and crew chief the rest of the regular season. But the confidence level there, so important for his success appears to be struggling once again as team dynamics within JGR appear to be suffering. Does it really look like a downtrodden Hamlin, temperamental Busch and laidback Matt Kenseth are all on the same page? Good luck, Carl Edwards; that Stewart-Haas Racing therapist might have a new client.

– Marcos Ambrose. AJ Allmendinger. Both of them could win at Watkins Glen this weekend and shake up the Chase. But keep an eye on Tony Stewart, the sport’s winningest driver at the track whose opportunities to steal a victory are running short. With the No. 14 team underperforming, it’s one of the last chances for Smoke himself to make an impact, and the path to the Chase is now clear (points won’t cut it). After four straight years of swing-and-miss in New York wine country, Smoke is long overdue to make a push.

” While we’re on the topic of Joe Gibbs Racing, Denny Hamlin had some choice words for their horsepower while sliding through the field late at Pocono.”

Ummm, linking to these choice words, or posting them here in this article, might be helpful.

Done. :) I had Tweeted it, but I shouldn’t assume everyone is following that feed. Sorry about that!

“fewer opportunities to succeed against established competitors in superior equipment”, says it all. Confidence is nearly as important as talent. Week after week young drivers learn how to lose eventually accepting that they will never win. What you get is fewer rising stars and events so non competitive that the growing lack of fan interest should surprise no one. The Cup drivers need to be banned from the lower series.

Did you really say that Ricky Stenhouse is Danica’s girlfriend??

MarkV
Reply to  Larry B.

If the shoe fits…

The choking off of advancement in NASCAR for young drivers is just another symptom of costs that are out of control. It’s hard to find sponsorship to run a full competitive season for established Cup stars, let alone up and coming drivers. However, I feel the waive of young stars that came up 2000-06 was symptom “boom years” where companies were throwing money at the “fast growing spectator sport”. It left this false expectation that if a driver didn’t win races immediately they were failures. Drivers weren’t given 2 or 3 years to show something before they were kicked to the curb for the next “young gun” (e.g. JJ Yeley, Jason Leffler, Regan Smith, etc.)

When doesn’t Hamlin have some “choice” words? He’s rather infamous for throwing his team under the bus. I’m sure he and KyBu get along swimmingly because they have the same manners. Must have been raised by the same wolves.

I think Stenhouse being Danica’s girlfriend is pretty funny! Seems his driving tanked about the same time as he partnered with her.

If you look up the work “entitled” in the dictionary, you will see Denny’s picture.