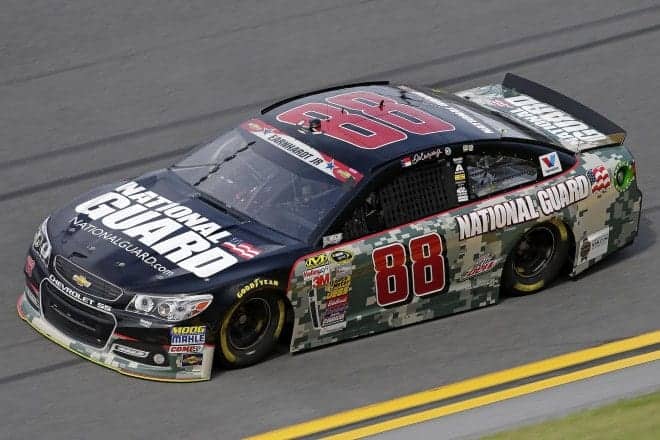 This week’s big announcement came from National Guard, and as most fans are aware by now, it wasn’t what they wanted to hear, as the Guard has decided to leave motorsports sponsorship after deciding that advertising on racecars in both NASCAR and IndyCar didn’t result in enough recruits to justify the cost.

As sponsorship get harder to find for many teams, even among the sport’s elite, it seems like the news hasn’t been good in recent years.

But it’s not as bad as it seems. While the National Guard was backing out of NASCAR and the No. 88 team of Dale Earnhardt, Jr.¸ no fewer than four other teams were announcing new sponsorship. JTG-Daugherty Racing was set to announce on Friday the return of one of their sponsors for 2015, which will join Clorox, who has already re-upped with the No. 47 and AJ Allmendinger. BK Racing announced a pair of deals, including a one-race sponsorship from Bully Hill Vineyards for Cole Whitt this weekend and a two-race package from Dustless Blasting, a Texas-based company, for Alex Bowman at Watkins Glen and Talladega. Finally, Germain Racing will add motor-oil maker Castrol to Casey Mears‘ No. 13 as an associate sponsor this weekend.

Sure, three of these deals are very short term, but they illustrate that there is still value in sponsoring a NASCAR team. Sponsorship has changed from the sport’s beginning, and in some ways, it’s coming full circle.

Once upon a time, smaller, local businesses represented most NASCAR sponsorship. They were looking to attract customers from their area in the days when most people who saw a race were sitting in the stands, because races were rarely televised and never in their entirety. It made sense to back a driver who was competitive or popular (or both), because it was as good as a “I get my tires at Joe’s, and you should, too” from the driver. Win on Sunday, sell on Monday didn’t only work for car manufacturers – it worked for Joe’s Tires and Mike’s Auto Body and Bob Smith’s car dealership.

It’s been well documented that Winston’s involvement in the sport as title sponsor of the premier series helped changed sponsorship. It showed that there was value in what was still considered a regional sport on a national level. And when the sport went national on television for the first time a few years later, it proved that Winston was right.

For the most part, sponsors still appealed mainly to race fans, selling products those fans could buy and use. Soft drinks, clothing, beer, cigarettes, coffee, cleaning products and more adorned the cars in an attempt to lure consumers to buy products. And it worked. As NASCAR went national, fans showed tremendous loyalty to products because they were advertised on race cars. Fans drank the beer that was on their favorite driver’s car and washed their laundry with a detergent that appeared on another car — they didn’t really follow that driver, but that was okay. The product was on a racecar and they supported the sport in general.

When the economy began a downturn, things changed as people, even the most diehard fans, changed their buying habits as prices went up and salaries stagnated. At the same time, fans lost some of the loyalty they once had to sport as rampant change left them dissatisfied with the sport in general. Some of the traditional sponsors did stay, looking to appeal to American consumers, but the face of sponsorship changed to a degree, with many now looking to advertise to the corporate consumer rather than the individual fan. Cessna aircraft and Bell Helicopter aren’t advertising to Joe Fan, but to the corporations who buy suites and even other sponsors. 3M, Lowe’s and Fastenal, to name a few, have large commercial markets as well.

Still, there aren’t enough sponsors to go around, and part of that is, undeniably, greed. A decade ago, $10 million would buy the hood on a competitive racecar. Now, it might buy primary sponsorship on a mid-tier or smaller team, while the big teams run closer to $25-30 million. At the same time, TV coverage, which is where sponsors used to get the majority of their return on investment, has shifted largely to covering a few cars with tight camera shots with a passing glance at the rest of the field, when wide camera shots and full-field rundowns used to be the norm, making it hard to justify the cost for little exposure.

But there is still value in NASCAR, and ironically, it’s the smaller, often local, companies sponsoring the smaller teams that are finding it. In a way, it’s come full circle in the sport. Space on the smaller teams’ cars is far less expensive than it is on a bigger team, so a sponsor can get a whole car for the cost of a smaller space on a big-money team car. There’s still local value even if there isn’t a lot of television exposure.

There’s also a little “hero” value for a sponsor picking up some time on an underfunded car. Many fans do care about those underdog teams, and appreciate the backing when a company chooses to put their name on one of those cars. That can result in a couple of different returns. One, the local fans may repay them by using their product or service if it’s something they need. For example, Castrol has some quick-lube shops in the Watkins Glen area, and perhaps its being on the No. 13 this week will prompt a few fans to go there for their next oil change. There’s also an exposure aspect on social media – if fans and media retweet a team’s announcement of a new sponsor, for instance, that sponsor gets exposure in that venue. Social media have the potential to reach a huge number of people, and sponsors can use that to their advantage.

So, while a major sponsor leaving the sport is never a good thing, there are smaller signs that there is still value in NASCAR, and it’s not only with the big-money teams the way it was a few years ago. It’s good for the sport when the smaller teams can improve and be more competitive, and that, in turn makes the sport more profitable for sponsors, an upward trend that’s just beginning to be seen now. While we can see that there’s still work to be done as some popular drivers are without funding, we should not turn a deaf ear to the fact that some teams are attracting new backers, and if those backers find value, others will too, and they will stick around, perhaps even investing a little more the next year.

It’s not a perfect world for fans or sponsors, and it’s unlikely that fans will return to the days where they buy products based on their sponsorship of racecars; there’s plenty of unrest among fans in the sport and the days of blind loyalty may be over for good. But the sport does still provide sponsors with something positive, and more and more smaller companies are testing the waters. Perhaps the past is the key to the future, with smaller local companies buying a race or two on cars of all levels. Or perhaps bigger companies will buy in again when the smaller ones find success.

However it shakes down, there’s a glimmer of hope on the horizon, and there’s some good news to be found.

Amy, I sure hope you are right. Combine skyrocketing costs with free fall TV ratings and on site attendance and you get the perfect recipe for wholesale sponser flight. I just don’t see the return on investment that today’s NASCAR offers. As a fan I am glad that sponsers stay but I cannot help but wonder why they do. I think we can all agree that if anyone is an expert on wasting money it is the United States government. So if the National Guard, a government entity spending someone else’s money, sees NASCAR as a poor investment imagine what a business spending its own money must think.

My wife and I are loyal to Golden Corral since they have been sponsoring Tommy Baldwin Racing’s cars (either the #7 or the #36) at Daytona and ‘Dega. TBR gets decent funding for those few races, Golden Corral gets good exposure for their money, and for the most part, TBR has delivered decent results with Golden Corral on their car.

This relationship should be a model for other small team/sponsor deals.

Hate to repeat myself but, big money is wrecking nascar. Glad to see the national guard pulling out of racing with a 25 to 30 million sponsorship to hendrick. My tax dollars. As ignorant as the government is, they woke up to the fact that a large amount of spending to a declining audience(both trackside and tv) just does not make sense. How soon will the corporate world wake up? Not long I bet.

There is still value in NASCAR for sponsors just not at $20-30 per year anymore. That’s why even the big teams now have multiple sponsors for one car. At some point economics will take over and drive prices back down because the owners can’t afford to band-aid together the big sponsorship packages. I really think we are close to that point and a major reason for the RTA.

I think this is the reason for the RTA formation. Costs are so high for teams that the sponsorship money has gone through the roof. If companies could get on a top car for about 16 mil, they would come back. Its time to restructure costs in NASCAR, not the Chase

I have a small business in the racing industry myself and sponsor a car. When discussing marketing with people who are paid to know, sponsoring a car is one of the last things they suggest. In fact we will probably drop it at the end of this year the return on investment just isn’t there.The consultants can value exposure at whatever they want. The important thing is money in the till. Internet, and social media is always at the top. Just saying.