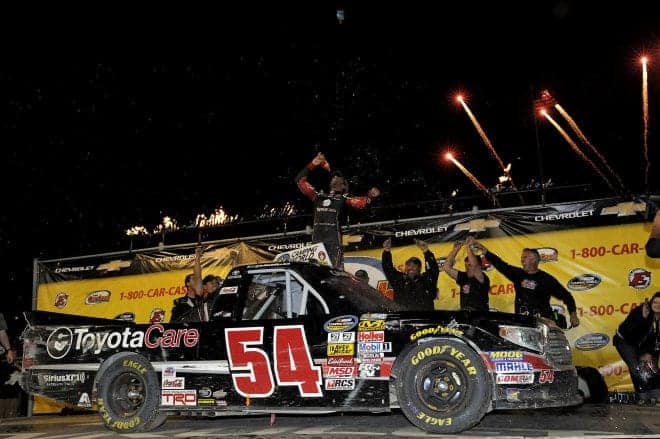 Darrell Wallace, Jr. has contributed two wins to KBM and Toyota's dominance in 2014.

Last Saturday afternoon’s Pocono Mountains 150 marked the halfway point in the Camping World Truck Series schedule. While it’s taken us nearly six months to get to the middle of the schedule, we’ll have a whirlwind of 11 races to close out the season in a mere three months. In the meantime, this season hasn’t been short on storylines that are worth remembering.

First and foremost, you can’t ignore Toyota’s dominance this season. Up until Austin Dillon took the victory at Pocono last weekend in a Chevrolet, the manufacturer had won 12 straight races, dating back to Phoenix last season. The majority of those wins have gone to Kyle Busch Motorsports as the organization has combined to win eight of 11 events so far this year. Five of those wins have gone to owner and part-time driver Kyle Busch, while sophomore driver Darrell Wallace, Jr. has two and young Erik Jones has one. KBM has truly emerged as the team to beat this season, and our very own Aaron Creed spoke with Jones about the team’s dominance, among other things. (https://frontstretch.com/beyond-the-cockpit-erk-jones-on-success-with-kbm-where-it-all-started-and-super-late-model-racing/)

“I’m just proud of it. I started here last year for five races, but this year we really have stepped it up,” Jones said. “With Toyota and KBM altogether, now we have really shown how much work we have put into it so it’s cool to be a part of it in this last year and a half. I’m lucky to represent KBM.”

Though KBM has been the dominant team and seems almost head and shoulders above the rest, a quick look at those that have started all 11 races this season makes it easy to see why Toyota has had such a strong run this year. Six of the top 10 in owner points thus far run Toyota, and Turner Scott Motorsports with their two full-time Chevrolets and Brad Keselowski Racing with their two full-time Fords are the only spoilers in that group.

Speaking of Toyota’s dominance, you would think that it would be a driver from the manufacturer atop the standings, right? Wrong. Instead it’s Brad Keselowski driver Ryan Blaney, who is currently in his sophomore season with the organization. But how is the driver of the No. 29 Ford leading the points if he hasn’t even won a race this season? It’s simple really – a combination of consistency and that six of this year’s trips to Victory Lane have gone to drivers not running for points.

In fact, Blaney has been one of the most consistent full-time competitors to date, scoring nine top 10s and seven top 5s in 11 races. If not for a pair of back-to-back crashes at Kansas and Charlotte where he finished 22nd, he’d likely have an even larger lead. Additionally, he boasts an average finish of 7.4 this year, and if you take out those two DNFs, that number rises considerably to 4.1.

With that said, we’re so far away from the time to be handing the championship to Blaney and his BKR team. In fact, it’s quite the opposite. Once again, the series appears to be poised to heading into the final race at Homestead-Miami Speedway in November not knowing who will come out on top. Though Blaney currently holds the lead, ThorSport teammates Johnny Sauter and Matt Crafton aren’t far behind sitting seven and 12 points back, respectively. Plus, with half of the schedule yet to run, veteran Ron Hornaday, Jr. (-20) and KBM driver Darrell Wallace, Jr. (-31) find themselves within striking distance.

This season also marked the return of Gateway International Raceway. Following a four-year hiatus, the 1.25-mile oval was added to the schedule once again, and Darrell Wallace, Jr. won the race in dominating fashion, leading a race-high 85 circuits. The next closest competitor was John Hunter Nemechek, who led 53 laps in just his fifth career start. Though the record books show a 15th-place finish for the 17-year-old, it doesn’t tell the story of the spirited battle he put up with defending champion Matt Crafton. The duo battled side-by-side for multiple laps before Nemechek spun while battling German Quiroga and was left to settle for 15th.

With only half of the season under our belts, there’s plenty of time for more storylines to pop up as we creep ever closer to November and closing the book on another season. Buckle up; as the races wind down, the action is set to heat up, especially with Bristol, Canadian Tire Motorsports Park, another trip to Martinsville and even Talladega left on the schedule.

I admit that I am often empathy challenged. That said, your efforts in trying to breath some life into this dieing series are admirable. My grandfather, rather a workingman’s philosopher, used to say, “Son, you can’t shine sh-t.”. The fans have made it increasingly clear that they have no interest in non competitive Japanese truck racing dominated by a single Cup driver with a personality disorder. NASCAR has made it increasingly clear that they could care less what the fans want. Yet you toil on, and do it well. I am not sure that many of us could make the same effort in your position.