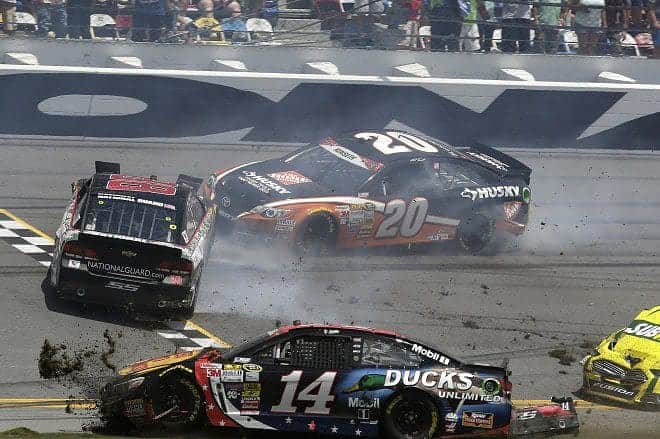 Ratings continue to be wreck week in and week out this season, though attendance is improving.

Television ratings for the GoBowling.com 400 at Pocono were released on Tuesday, and the picture painted is a familiar one for 2014 – and it resembles Edvard Munch’s The Scream: a final rating of 2.8, a 13% decrease from 2012. Given the relatively low ratings, a decrease of 13% may sound harmless, but a deeper delve into the numbers will show it is indeed significant.

The last few years of declining ratings were prefaced with, “Well, Junior isn’t winning, so fans aren’t tuning in.” Here we are smack dab in the middle of the DaleYeah Renaissance returning to a track where he won two months ago and just completed the improbable sweep of the Tricky Triangle. While it did indeed look like rain would derail the day with the start of the race moved up 13 minutes (…because apparently it takes 13 minutes to run 200 miles to halfway…), the crowd was decent given the threatening skies, but that should not affect those in TV Land.

So where did all of our loyal viewers watch from as judged ratings-wise?

For those who mourn the glory days of the sport and its distinctly Southern flair, take heart. Only one market north of the Mason-Dixon line, and no major coastal markets outside of Navy-town Norfolk.

Yes, the sets were turned on in Grand Rapids, Michigan but that didn’t register but a blip – nor did the headquarters of the sport itself, with Charlotte barley cracking the Top 10 nationally, albeit double the final 2.8 rating overall. While the reasons behind this are no different than we’ve heard in years past – Pocono is boring, it always rains, people are outside in the summer, blah blah blah – fair enough.

What I believe what we are seeing is further evidence of how The Chase has conspired to reduce the value of the first 26 weeks of the season (Daytona 500 excluded), particularly with the Win-and-In scenario now in place.

Take a look who’s locked into The Chase or at least in safely for now – Junior, Jeff Gordon, Jimmie Johnson, Carl Edwards, Kurt & Kyle Busch, Clint Bowyer, Brad Keselowski, and Matt Kenseth. Even Kasey Kahne and his garbage luck are in at the moment, and he hasn’t been at a loss for speed lately, which further bodes well for his chances. The only driver of record who hasn’t qualified yet is Stewart and he’s a legit threat to win at any time now that he’s healed and has a couple of sprint car wins under his belt.

With nobody outside of this group as a real threat to win….what exactly is the point right now as far as the championship is concerned? For all we’ve heard about going for broke and teams taking wild chances to win races, all that usually amounts to is a blown tire on the 48, or Harvick suffering another late race miscue or parts failure.

Nobody really pays much attention this time of year to our national past time, as the pennant races haven’t quite shaped up yet, the trade deadline just passed, and there’s still over six weeks of constant games before people really start taking notice, beyond regional interest.

Or in the case of Tampa Bay and you just cut loose your most valuable player to my Tigers and then the stands get really empty.

For all the effort made with The Chase to try to go head to head with football – both college and the NFL – there is a decade’s worth of data at this point that proves it just doesn’t work. What’s worse, it’s killing three months of racing where there is only one off-weekend, hamstrung by handpicked tracks that don’t necessarily produce the most interesting racing to bear the burden of satisfying agitated fans, while trying to convince the casual fan that this is as good as it gets.

To compound matters and to further ensure that the direction remains unchanged, Brian France confirmed recently that the schedule will not see any major revisions for 2015.

And some wonder aloud “why, oh, why did the RTA come to be?”

If the Race Team Alliance would consider taking me on as a consultant, I would present my five point plan to fix these sagging ratings and smooth out the attendance spikes:

1. Reduce the Number of Races From 36 to 31. If nobody’s watching, why bother racing? It just costs a lot of money and saturates the market. JuCo ECO101 here kids: scarcity of product increases demand. Less labor costs, less sponsorship dollars required, more potential new teams, and more interest. It would also help the sanity of the competitors to have a couple of extra weeks off during the summer, as well as the smaller teams to rebuild and reload for the coming weeks. Tracks that would get one date: Loudon, Dover, Phoenix, Kansas, Texas. Tracks that go away: Chicago and Kentucky. Why? Because they look the same and nobody shows up.

2. Fix the Stupid Schedule. This is said often and more eloquently, however I am talking about changes that run a bit deeper than the often referenced first few weeks of the season, that sees teams driving back and forth across the country like some dysfunctional third installment of the Cannonball Run. Move Talladega back to its previous date in July (yeah, it’s hot, but it’ll give the fellas in the infield extra reason to celebrate), run the July Daytona race on Saturday morning at 11:00am as was always the formula pre-1998 (and proved to work this year, albeit on a Sunday) and save the lights for a rain delay and qualifying, since knockout qualifying is basically pack racing now for plate tracks. Darlington and Atlanta should also swap dates – there is no reason NOT to have the Southern 500 back there on Labor Day, and why this continues to go unchecked makes little sense. And enough night races during the summer…it’s not 1992, and not every race is going to be The Winston: One Hot Night – Part Deux.

3. Old School Rules. There’s been talk of horsepower reduction for 2015 citing increased costs and racing suffering due to the IndyCar entry speeds and 3400lbs sleds on 10.5” x 15” tires. The new front end ride height was supposed to reduce the dreaded aero-push and make for better racing. It hasn’t; if anything (as predicted by many a crew chief), it has made it worse. Whatever the aero/horsepower formula was from 1992-97, use that as your benchmark. Lowering engine compressions, instituting heavier valve-train pieces and further gear ratio reductions can all reduce power without forcing teams to scrap years of engine development, as well as increase reliability and lower costs attributed to blown motors. If they’ll live all day at 9500rpm, 8500rpm should be that much better, right? Besides, how many engine builders are there today in the Cup Series? Four? No need to reinvent the wheel…particularly with tried and true pushrod V8 engines.

4. Chase – Gone. Sorry, it doesn’t work. We’ve tried it five different ways, and you still get the same result: indifference. It was a fun idea in 2004-2006 but after that….eh. Having tried my damndest as a media member to breathe life into it, it just doesn’t resonate. Ever. A season-long points battle makes every race more valuable and a must-see, allowing them to stand on their own merits as the season winds down.

And before somebody starts pining for the past, sorry folks, North Wilkesboro isn’t coming back, neither is Rockingham, and quit with the dreams of a dirt track in The Chase. The only other series that runs on dirt at the highest level is World Rally Championship, but they do jumps and you can stand on the track.

Unless everyone wants to pitch in and pull weeds at Wilkesboro, repave it and remove everything that can cause tetanus, its just not going to happen – as much as I miss it. That said, what a perfect project and place for the Truck Series, Nationwide, Southern Super Series, and other regional races if somebody worth BILLIONS would invest a few bucks into it…

5. Add Two Road Courses. “Oh these are stockcars, this ain’t Formula One, NASCAR isn’t about road racing….”, whatever, shut up. What race saves the Nationwide Series from being a perpetual Kyle Busch/Brad Keselowski retirement fund benefit? Road America. Which one used to? Montreal. Guess where we’re going? That’s right, north of the border! And before you start complaining about not being in the States and having to travel too far, people aren’t exactly showing up in droves to the ones that ARE here at most tracks, so why not throw a bone to those who actually DO show up? I know, it’d be really weird and a total think-outside-the-box maneuver to provide a product to people who clamor for it…

Vito is one of the longest-tenured writers at Frontstretch, joining the staff in 2007. With his column Voice of Vito (monthly, Fridays) he’s a contributor to several other outlets, including Athlon Sports and Popular Speed in addition to making radio appearances. He forever has a soft-spot in his heart for old Mopars and presumably oil-soaked cardboard in his garage.
Previous Truckin’ Thursdays: Sitting Pretty at the Halfway Point
Next Going By the Numbers: Five Prospects Who Should Get Major NASCAR Looks