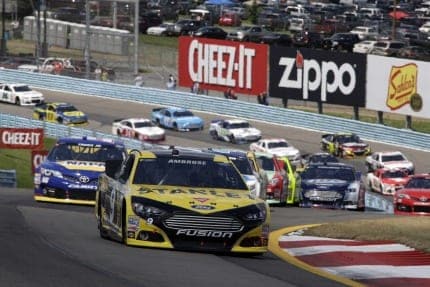 The Sprint Cup Series is in scenic Watkins Glen, NY today for the 22nd round of the 2014 season, and for what will only be the second time this season, the drivers will be turning right. Watkins Glen International has developed into one of the finest circuits that the Sprint Cup Series visits, as the course perfectly blends high-speed oval-esque action with the much adored low-speed beating and banging that is inherent to stock car road racing. There is indeed a reason why they call this place the Talladega of road courses.

Today’s race is chock-full of storylines, with one driver, Marcos Ambrose, looking to save his job while other drivers, such as Kyle Larson and Kasey Kahne, are looking to steal a win in order to lock themselves in the Chase. Couple that with the typical hair-raising action that this facility has become known for, and you have the makings of what could be yet another memorable day in south central New York State.

1. Is Marcos Ambrose racing for his job today?

Let’s be honest here, Aussie driver Marcos Ambrose has not exactly set the world on fire during his tenure in the NASCAR Sprint Cup Series. Despite oodles of hype preceding his move to NASCAR, Ambrose has largely underachieved on nearly every track with the exception of one: Watkins Glen International. Ambrose’s background in the Australian V8 Supercar Series translates very well to the Sprint Cup Series’ style of racing at the Glen, and as such, Ambrose has been completely dominant at the track since entering Cup in 2008. Two wins and a staggering average finish of 6.8 serve as testament to that fact

The problem for Ambrose of course, is that he has been unable to replicate that success anywhere else in NASCAR, which is exactly why Ambrose is in the situation he finds himself in today. Rumors have run rampant throughout the garage that Richard Petty Motorsports is close to being ready to pull the plug on the Ambrose-NASCAR experiment, and apparently even Ambrose himself is longing to make the move back to Australia. The general consensus is that if Ambrose doesn’t make the Chase, RPM will release him so that he can return to Australia.

However, if Ambrose were to win today and lock himself in the Chase, all of that would likely change. Given Ambrose’s track record at the Glen, he is the overwhelming favorite to win today, so in many ways, both he and the team are likely viewing today’s race as a last-ditch effort to keep the Ambrose-led #9 team together in it’s current state. A win would lock the team into the Chase and perhaps re-open contract renewal discussions for 2015 and beyond. But if he doesn’t win…well, that would likely be the final nail in the coffin for Ambrose’s less-than-stellar NASCAR career.

2. Could strategy send a desperate team into the Chase?

In NASCAR, road course races are wildcard events. Past history has shown that just about anything can and will happen at these events, and it is all courtesy of pit-strategy. In road course races, teams plan out the exact number of pit stops that they will execute throughout the race, and then stick to that plan as the race unfolds. This is starkly different from oval-racing pit strategy which favors a “come in when you need it” style approach to pitting.

This unusual (for NASCAR) style of pit strategy normally wouldn’t jumble the running order all that much compared to road races in other motorsports, but the propensity of cautions in NASCAR tends to make the strategy a complete mess. As cautions fall throughout the race today, teams on wildly divergent strategies will get shuffled and re-shuffled throughout the field to the point that just about anyone could end up in the lead. The team that wins today will be the one who can correctly predict what calls will have to be made in order to keep their driver ahead of the field as pit strategies and untimely cautions jumble up the running order.

This opens things up immensely to guys like Kyle Larson, Kasey Kahne, Brian Vickers, and others, all drivers who are desperate to get a Chase berth. With this race being the last real chance to “steal” a race courtesy of luck and strategy, it is very possible that one of the teams on the fringe of the Chase could make a big gamble in order to get that all-important win. All told, it could lead to a wild finish to the race.

3. Can Jeff Gordon recapture the magic he used to possess at the Glen?

There was a time, long, long ago, that Jeff Gordon was the undisputed king of road racing in NASCAR. Whenever the series would come to the Glen, it was considered a foregone conclusion that JG24 was going to be, at the very least, a factor to win the race. Between the years of 1997 and 2001, Gordon won 4 out of the 5 races contested at Watkins Glen. After 2001, however, Gordon’s performance at the track dropped precipitously, and he hasn’t been able to get back to his previous form since.

From 2002-2013, Gordon finished outside of the top 8 in every single race at the Glen, and finished outside the top 20 a whopping six (!!!) times. But the Jeff Gordon of 2014 is much different than the Jeff Gordon of the past ten years. For the first time since 2007 (the last year that Gordon truly contended for a win at the Glen), Gordon appears to have what it takes to win this race. Gordon surprised many in yesterday’s knockout-qualifying session by displacing weekend-favorite Marcos Ambrose from the pole to grab his first pole position start of the year. It’s been a very long time since Gordon has shown this kind of speed at Watkins Glen, and considering the amount of momentum he is carrying into this weekend, a win for the #24 team looks like a distinct possibility.

Should Gordon win today, it would tie him with his Hendrick teammates Jimmie Johnson and Dale Earnhardt Jr. atop the Chase Grid and give him another 3 extra points towards the first round of the Chase. It may not seem like much, but it is indeed a lot with how close this series is, and given the amount of swagger Jeff Gordon has right now, I’m not sure anyone wants to give him an advantage come Chase time. Keep an eye on the #24 car today.

4. Who takes the checkered flag this weekend?

Every year we go to the Glen, all of the various NASCAR experts default to Marcos Ambrose as the most obvious pick to win the race. They are not wrong for thinking this. As mentioned earlier, Ambrose’s sporty 6.8 average finish at the Glen is about as good as any driver can muster at any race track, so to disregard him would seem silly. But guess what? I’m not picking him today.

Not many folks seem to realize this, but Ambrose has had some issues with cracking under pressure and making unusual mental mistakes over the course of his NASCAR career. Ambrose very easily could have won last year’s event here, but he got frustrated trying to work through traffic and ended up getting wrecked. Flashback to another road course race, Sonoma in 2010, and again we see Ambrose cracking under pressure. Ambrose made a huge blunder under yellow flag conditions by not maintaining pace speed and wound up losing that race as a result.

With how much pressure is on Ambrose this weekend, I just don’t feel comfortable picking him. My pick is going to go to a guy who is known for not cracking under pressure: Brad Keselowski. Keselowski qualified well for this race and has finished in the top 3 the past three years here at the Glen. To say he is “due” is an understatement, the man knows this place well and has a better team now than the one that helped him place 2nd in last year’s race.

Ultimately, I think Keselowski and Ambrose will end up doing battle once again today, and I think it’ll be Keselowski who comes out on top this time.