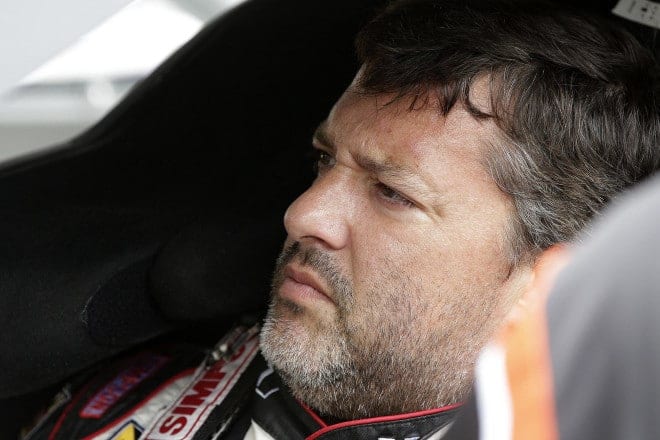 Regan Smith will sub for three-time NASCAR champ Tony Stewart at Watkins Glen today, jumping in the No. 14 Chevy while an investigation continues after Stewart struck and killed fellow racer Kevin Ward, Jr. at Canandaigua Motorsports Park in New York. Competition Director Greg Zipadelli broke the news in a press conference this morning, explaining it was Stewart’s decision to skip the race after waking up with a “business as usual” mentality to start the day.

“Unbelievable tragedy,” said Zipadelli, his voice quivering at times at the microphone. “Our hearts go out to obviously Kevin [Ward, Jr.] and his family. Thoughts and prayers. This is a very tough, very emotional time for everybody. His family, our family at Stewart-Haas, Tony Stewart. With that being said, we feel that, as a group Tony will not drive today. Regan Smith is on his way up. NASCAR has approved for him to get in the race car today. They’re going to do everything they can to expedite getting him comfortable. That’s kind of what we’ve been working on this morning and trying to get executed is getting Regan here, and obviously everything we can do for Tony and everybody else.”

Zipadelli, who has been paired with Stewart through the majority of his NASCAR career, was clearly emotional when discussing the impact of the tragedy on his boss, also one of his closest friends. The driver/owner himself has not commented on the incident publicly, leaving Canandaigua Motorsports Park without comment shortly after the incident Saturday night. For its part, law enforcement has described Stewart as “cooperative” while information gathering continues after Ward, Jr. was struck and killed by Stewart’s vehicle in Turn 1 of the dirt track.

No charges have been filed in last night’s incident, which will be shared with the New York State District Attorney for review per state protocol. Sheriff Philip C. Povero spoke this morning, explaining his department was collecting amateur video on the incident while continuing to sort through the facts.

“There are no criminal charges pending at this time,” Povero said. “We are not making any inferences of any criminal conduct at all.”

As for Stewart, 19th in the Cup standings, he will remain Chase eligible provided he attempts the final four races in the regular season. Whether he will race next Sunday, along with if his short-term responsibilities will change as co-owner of four-car Cup operation Stewart-Haas Racing, remains unclear. NASCAR, which had earlier said there was nothing “precluding” Stewart from competing, released its own statement shortly thereafter supporting SHR’s decision.

“Our thoughts and prayers go out to the family, friends and fellow competitors of Kevin Ward, Jr.,” the sanctioning body said. “We support Tony’s decision to miss today’s race and we will continue to respect the process and the timeline of the local authorities. We will continue to monitor this situation moving forward.”

“All of us at Bass Pro Shops are all deeply saddened about last night’s tragic accident at Canandaigua Motorsports Park,” they said in a statement. “We send out thoughts and prayers to the family and friends of sprint car competitor Kevin Ward Jr. and also to Tony Stewart and everyone at Stewart-Haas Racing.”

Sunday marks the second straight year Stewart has missed the Cup race at Watkins Glen. Last year, it was the first event Stewart missed after breaking his right leg in a vicious Sprint Car wreck.

Update (1:37 PM ET): Shortly after the race began, Stewart released his own statement.

“There aren’t words to describe the sadness I feel about the accident that took the life of Kevin Ward Jr. It’s a very emotional time for all involved, and it is the reason I’ve decided not to participate in today’s race at Watkins Glen. My thoughts and prayers are with his family, friends and everyone affected by this tragedy.”