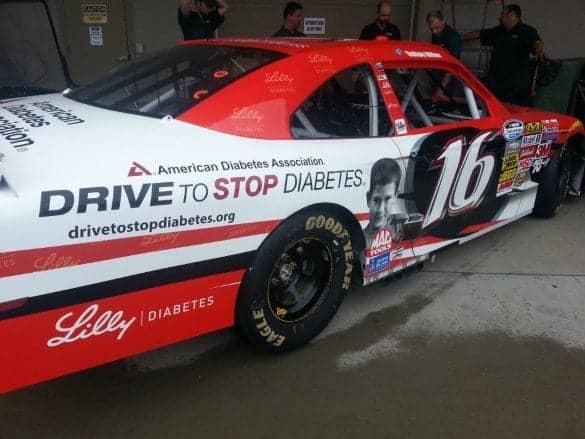 Richard Childress Racing announced that the No. 2 of Brian Scott and the No. 62 of Brendan Guaghan’s cars will feature paint schemes with the favorite colors and interests of Nationwide Children’s Hospital Patient Champions, Avery Neely and Allie Norman.

Roush-Fenway Racing announced that six-year-old Luke Benner’s face will be on Chris Buescher’s No. 60 Ford Mustang this weekend. Benner was diagnosed with Acute Lymphoblastic Leukemia in December 2012.

“Luke is a great kid,” Buescher said. “He has such a positive attitude and is so full of life and energy. I’m proud to carry his name and picture on the No. 60 Mustang this weekend. What the folks at the Nationwide Children’s Hospital do on a daily basis is amazing, they are the real heroes. I’m just excited to be a part of it.”

“Chris is really nice to hang with,” said Benner. “I think it’s cool he drives a fast car and wears a helmet.”

RFR also announced that five-year-old Blake Hames will be on Trevor Bayne’s No. 6 AdvoCare Ford Mustang this weekend. Hames was diagnosed with neuroblastoma, a rare type of cancer that affects the central nervous system, when he was 10 months old.

“Blake is such an inspirational kid,” Bayne said. “To think about everything that he went through at such a young age, it’s just incredible. I’m very excited to have him be with our team this weekend. I think the car looks awesome and I hope that we are able to give him the experience of a lifetime and get to take him to Victory Lane.”

“I am excited to meet Trevor because he gets paid to go fast!,” Hames said. “And I can’t believe that my picture is going to be on a race car.”

It was also announced via RFR that Ryan Reed’s No. 16 American Diabetes Association Drive to Stop DiabetesSM presented by Lilly Diabetes Ford Mustang Ford Mustang will feature nine-year-old Dalton Miller. Miller was recently diagnosed with Type 1 Diabetes, something that Reed knows very well as he has Type 1 Diabetes as well.

“I think what the Nationwide Children’s Hospital is doing this weekend is really cool,” Reed said. “It’s an awesome experience for all of these children and their families. Dalton and I share a really special connection, since we both have type 1 diabetes. I’m excited that he will get to see up close that diabetes does not have to stop you from pursuing your dreams. I’m grateful to be associated with organizations like the American Diabetes Association and Lilly Diabetes, who care so much about spreading that message. It’s really what the whole Drive to Stop Diabetes platform is all about.”

“It gives me hope,” Miller said. “That I can do anything.”

In total, nine drivers will be participating in the program this weekend. The Nationwide Children’s Hospital 250 airs live on ESPN at 2:45 p.m. ET on Saturday, Aug. 16.