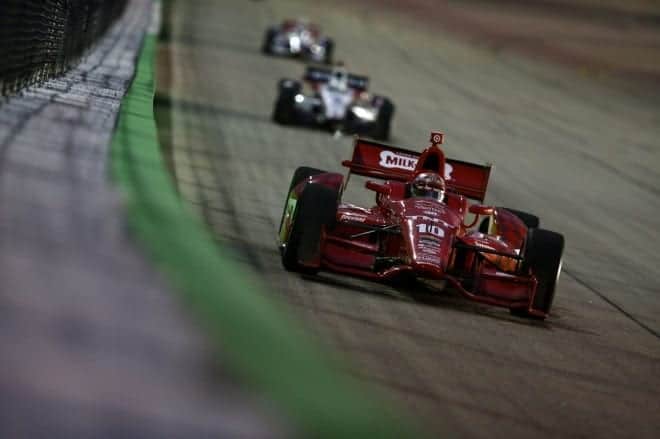 Welcome to the IndyCar Round Table! Several times throughout the season, your favorite writers will get together to discuss the latest IndyCar news, rumors, and so much more!

Toni: Is there a lot to talk about anyway?
Matt: Not a whole lot. I personally think Milwaukee is shaping up to be a fine race
Huston: Stretch run here looks good.
Matt: Milwaukee, Sonoma, Fontana. Three awesome tracks in succession. Generally speaking, in years where Iowa has been good, Milwaukee tends to be equally as good. Iowa was epic this year, so…
Toni: I’m interested to see how the momentum that’s been building carries to Milwaukee.
Huston: Toni, when you say momentum, what do you mean? For the series, drivers…?
Toni: For the series–should have been specific there.
Huston: All good, was just wondering; because, really, no one driver has taken over as of late.
Toni: Oddly, for the drivers, is there anyone really on a tear? It’s been just tough competition for them–no one has the momentum in the sense of a stretch run. At least not yet.
Matt: Speaking of momentum, how about the TV ratings as of late? Mid-Ohio was up 98%!
Toni: That was more what I meant by momentum. The series seems to have some going with fans. This is a good thing.
Huston: Certainly a good thing.
Toni: And they’ve got a tight championship battle shaping up so if it stays that way, you could not ask for better.
Huston: Kick that all together with the fact that they’re done before football really gets going…and it looks like a good year.
Toni: I’m still wrapping my mind around the concept of the season being over this early. I’m not saying it’s a bad thing. Just still getting used to it. I have to keep reminding myself this is the final stretch run.

Matt: I think it’s so strange how the ratings have just randomly turned around so suddenly and vigorously. IndyCar has had a very consistent product over the past 3 years. Perhaps racing fans are finally realizing what they’ve been missing out on?
Huston: Good point Matt. It’s not like much has changed in an overall way.
Toni: I can’t account for it either Matt. Iowa? I saw so many people say they watched it and it was the best race of the weekend. Have they actually decided to keep watching or start watching this time?
Huston: Maybe there are a few reasons. The racing, for the most part, has been decent. People seem to be getting turned off by NASCAR broadcasts and are looking for something different. And then there’s the malaise with NASCAR in general. Does that all add up? Maybe, maybe not.
Toni: So IndyCar is the destination for disillusioned NASCAR fans?
Huston: Not out of the realm of possibility.
Toni: No, it’s certainly not.
Matt: I think, if nothing else, the ratings increases at the very least show that IndyCar has stopped the bleeding so to speak. The product has been consistent, no major controversies have happened recently, the sport has sort of regained some financial footing, etc. I think IndyCar has finally established a nice little consistent niche for itself.
Toni: Matt those are good points too. Derrick Walker has been solid and consistent as a leader for the on track product people see; Mark Miles has been solid on the corporate side. Team owners aren’t rebelling against either. Management has been peaceful. And Verizon has gotten them on more solid financial footing.
Matt: All of that being said, I do not think IndyCar is gaining disillusioned NASCAR fans or anything like that. NASCAR has objectively had one of its most competitive and exciting seasons in a long time this year, and the general consensus I got from people at Watkins Glen this past weekend is that they are relatively pleased with how the NASCAR season has gone.
Huston: Matt, you say that but the ratings continue to drop for NASCAR.
Toni: Matt, bear in mind you talked to the people who were at Watkins Glen. Not the ones who weren’t. Those are the ones who stopped coming and stopped watching. They weren’t there to tell you how they felt about NASCAR.
Matt: That’s true, but to say that they are going to IndyCar is a stretch.
Huston: Oh, I’m not saying they’re all going to IndyCar, but even if a few do, that works.
Toni: Maybe it’s not them, but someone is tuning in that didn’t use to. That’s what really matters. Fresh eyes, increased numbers. Maybe they aren’t NASCAR fans; maybe they are the fans who’d drifted away from IndyCar coming back. Giving the sport another chance now that it seems they have finally pulled their heads out of….well, you know.
Matt: Rain delays, lame duck networks, and some stiff TV competition have hurt NASCAR in the ratings department this year. I wouldn’t read into the depressed ratings as a complete indication that NASCAR is on a total downswing. Ratings were up in both 2013 and 2011, people tend to forget that. At any rate, there’s no sense in comparing the two series from a ratings standpoint. Two totally different animals with different expectations and views on what “success” is.
Toni: I’d like to return to the drivers. We hit on it but the fact that no one has a clear advantage. We’ve got three races. Three different kinds of tracks. That’s highly interesting to me.
Matt: If Will Power can continue to overachieve on ovals, I think the title is his.
Huston: He’s got to be confident, well, more than ever before, going to Fontana. It’s Milwaukee that will be the question.
Toni: How funny would it be if Power finally wins the thing BECA– USE of ovals?
Huston: And Power must be frustrated with that result at Iowa, when he dropped through the field with ten laps to go.
Matt: Yeah, Power ought to be in good shape for Fontana. Milwaukee is really where he could win it or lose it (the championship that is).
Toni: The thing is, particularly with those double points, like I said last week, there are more people still in this thing, at least right now, than you’d normally expect.
Huston: Funny that the two guys atop the standings are the runners up from the past couple years
…which I guess that means Pagenaud will win.
Toni: Exactly Huston. It’s been funny that Penske can’t get out of the runner up rut.
Matt: Power has sort of shut me up the past year and a half as far as his oval prowess is concerned.
Huston: Bingo, Matt. Power used to be a non-factor on ovals, not so much anymore. Must be weird for Ganassi not to have his drivers higher up as the season concludes. Though Dixon has an outside outside shot.

Toni: Dixon does have an outside shot but we don’t run at Mid-Ohio again.
Matt: Chalk it up as a rebuilding year for them. My guess is that they’ll come out of the gate hot in 2015.
Toni: Interesting though that even with Ganassi off this season, and so many different winners through the year, the championship conversation still comes down to Penske, Ganassi and Andretti. With the lone exception of Pagenaud.
Matt: Pagenaud could potentially be at Andretti next year.
Huston: That’s the continued rumor.
Matt: I think it’s going to happen.
Huston: Which means Hinchtown is out.
Toni: I get the upside, but it’s funny because looking at the way the standings sit now, it’s hard to see it.
Matt: Pagenaud would be an upgrade over Hinch. Hinch has sort of underwhelmed in that car.
Huston: Hinch, ugh, that dude can’t buy a break anymore. Terrible year for him.
Matt: Losing the GoDaddy money hurt his program big time.
Huston: What, are you saying that being sponsored by a company owned by the band Live isn’t quite the same as GoDaddy?
Toni: Pagenaud is an upgrade for them but are they an upgrade for Pagenaud?
Huston: Toni, that too is the big if. It’s not like Andretti has been kicking ass and taking names. Just looking for a good clean race at Milwaukee where all the top drivers finish in respectable spots and aren’t taken out by things like a stuck throttle, a loose whatever, or someone doing something idiotic on the track. That’s probably a lot to wish for.
Matt: I think RHR has proven over the years that Andretti-stuff is more than capable of delivering a championship. Schmidt-Peterson is a good team but Pagenaud has maximized that team’s potential for now at least. Other than that, just hoping for a safe race in Milwaukee.
Toni: I third the sentiment for a good safe race in Milwaukee. And a good championship battle down to the wire too.