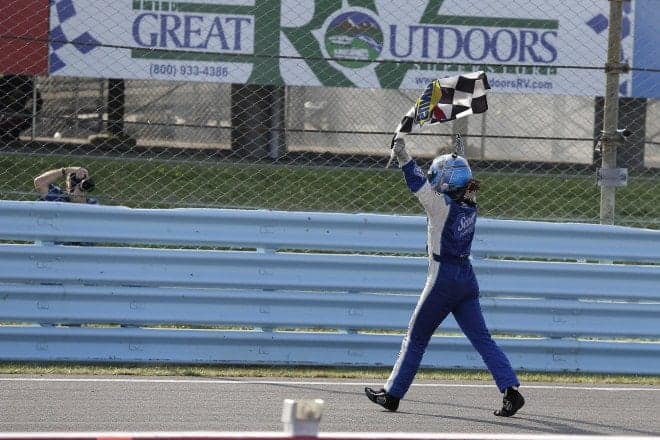 Can you imagine the conversation between the JTG-Daugherty Racing owners — Tad Geschickter, Jodi Geschickter and Brad Daugherty — and Bobby Labonte in June of last year? I assume it went something like this:

Owners: Bobby, we’re going to bring in AJ Allmendinger to run some races in order to evaluate the program.

Labonte: You’re replacing me, a former champion and icon in the sport, with the guy who recently served a drug suspension and has never won a race?

It was one hell of a gutsy move from a team that needed to take a big risk to survive. JTG-Daugherty entered Sprint Cup as a satellite team of an up-and-coming Michael Waltrip Racing and they had a driver, Marcos Ambrose, who quite frankly overachieved in his first full season in 2009. Ambrose ranked 18th in the standings that year, one spot ahead of Kevin Harvick and seven in front of Dale Earnhardt, Jr.

The team began a steady decline from that point on. Ambrose bolted at the end of 2010 for slightly greener pastures, and the team inserted a past-his-prime Labonte.

The results just got worse and worse to the point that JTG-Daugherty was teetering on the brink of becoming a backmarker. There are about 28 competitive Sprint Cup teams, cars that could win given the right circumstance — outside of Talladega, the crappiest circumstance. Teams such as Furniture Row Racing border the positive sign of that line and teams such as Front Row Motorsports and Tommy Baldwin Racing border the other side. Early last season, JTG-Daugherty was on the wrong side. The team couldn’t have won a K&N Pro Series race.

Someone over there hit the panic button, and that’s what led to the Allmendinger move. It was a riskier than giving Alex Rodriguez a 10-year contract. Labonte might’ve driven slower than an old man on the expressway (four top 10s in his last three seasons and an average finish of 29.4 in 2013) but he was still Bobby Labonte, once a champion and a model of consistency. He still carried a legion of fans, and despite his age and results was a sponsor’s dream.

Labonte was safe. He was the complete opposite of Allmendinger, whose reputation couldn’t withstand that 2012 failed drug test. Labonte’s calling card was likeable former champion and Allmendinger’s was of the guy who tried Adderall and severely harmed his career before he ever won anything.

On paper, the move made little sense, but it proved to be the right one.

The team finally had a Sprint Cup-level talent again to bring energy and some better finishes. Allmendinger was a risk from a marketing perspective, but he wasn’t from a talent standpoint. In 2013, he proved that to anybody who wasn’t already convinced. He was a seatbelt buckle away from winning the Indianapolis 500, overachieved in his Sprint Cup stint with Phoenix Racing and won both times he was behind the wheel of Roger Penske’s Nationwide Series car. Allmendinger did everything in his power on the track to prove he was worth the risk, while at the same time explaining in interviews why he wasn’t one.

After deciding Allmendinger was there guy for the future late last year, JTG-Daugherty then made another brilliant move and formed a technical alliance with Richard Childress Racing and Earnhardt Childress Racing engines, switching from Toyota to Chevrolet. As co-owner Brad Daugherty told ESPN before the start of this season, “We saw the huge holes that we weren’t able to fill in-house. We knew we had to have an alliance if we truly wanted to be competitive.”

It’s paid off in a big way. Even before Sunday, JTG-Daugherty Racing had reestablished itself as a competitive team again. It’s still an underdog, not an afterthought.

Clorox and Kimberly-Clark Corporation both noticed, signing multi-year extensions with the single-car operation despite little past success. At Watkins Glen, JTG-Daugherty’s risk was truly rewarded when Allmendinger outdueled Ambrose — the driver who lost a race in the 47 at Sonoma after turning the car off while going uphill — to pick up his and the team’s first Cup victory.

The story was overshadowed by the tragedy the night before, but on a day NASCAR really needed a feel-good story, Allmendinger and JTG-Daugherty Racing delivered it. A driver whose career hit rock bottom two years ago found a seat with a small team that hit rock bottom last season. On Sunday, for one day at least, they stood at the top.

Sometimes the risk is worth the reward.

3 thoughts on “Racing to the Point: Risk Worth The Reward for JTG-Daugherty Racing”