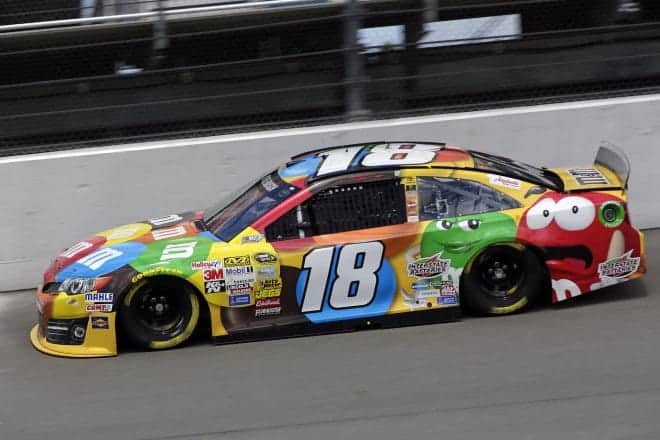 Early Wednesday morning, Joe Gibbs Racing announced that Mars, Incorporated has signed a new multi-year contract that will see their M&M’s brand remain as the primary sponsor on Kyle Busch’s No. 18 Toyota.  In addition, Mars, Incorporated also re-upped with NASCAR as well.  As a result, Mars, Incorporated candies will continue be known as the “Official Chocolate of NASCAR.”

Officials from Mars, Incorporated are proud to maintain their relationship with Joe Gibbs Racing.

“From connecting with fans to engaging our retail partners and creating passion among our associates, our alliances with Joe Gibbs Racing and NASCAR are tremendously successful,” said William Clements, Mars, Incorporated’s Vice President of Sponsorships and Sports Marketing at Mars Chocolate North America.  “We’re thrilled to extend our partnerships and look forward to celebrating more wins both on and off the track.”

Joe Gibbs, owner of Joe Gibbs Racing, is very happy to have Mars, Incorporated back with the team for years to come.

“Mars has been a big part of the Joe Gibbs Racing family and we’re excited to continue what has become a winning relationship,” Gibbs said.  “Mars has been such an important partner to us throughout the past six plus seasons, and to have them continue their support inspires us as a team to work even harder every day. Everyone at JGR is committed to ensuring they experience the type of success on and off the track deserving of such a great company.”

NASCAR is very happy to continue to have Mars, Incorporated’s candies involved with the sport.

“Mars is one of the most recognizable brands in NASCAR and is among the best-in-class marketers in all of sports,” said Brent Dewar, NASCAR’s Chief Operating Officer.  “More than two decades after entering NASCAR, Mars continues to help make race day more fun and we couldn’t be more proud to see the company continue to re-invest in our sport.”
The press release did not note how many years that the new deal would run.  Mars, Incorporated, via their M&M’s brand, is in their seventh year on the No. 18 Toyota with Kyle Busch.  In that time, Busch has started 237 races.  He has won 20 times with the M&M’s colors, and five additional times with other backers.

While M&M’s will continue as the primary brand sponsor on Busch’s No. 18, additional brands will be featured as well.  Wrigley’s, which is now a division of Mars, Incorporated, will likely return as well as Snickers.