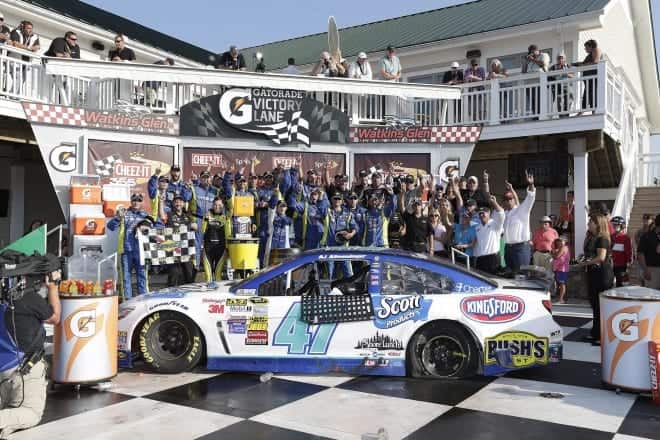 With the new Chase format, there is such an emphasis on winning, but for AJ Allmendinger, Sunday’s win meant a little bit more. He claimed his first Sprint Cup Series victory, the first for JTG Daugherty Racing and put the “little team that could” into the 2014 Chase. It was a valiant fight to the end with veteran road racer Marcos Ambrose, who was also hoping to race his way into the Chase but fell one position short.

I’m sure a number of drivers leading the Power Rankings are happy that a road course is not in the Chase as only three drivers (Kevin Harvick, Joey Logano and Matt Kenseth) in the Power Rankings top 10 after Pocono finished in the top 10 Sunday afternoon. Jeff Gordon, Brad Keselowski, Ryan Newman, Jimmie Johnson, Clint Bowyer and Kyle Busch all finished outside the top 25. While Gordon, Keselowski, Johnson and Busch are all safely locked into the Chase, Newman and Bowyer can ill-afford any more poor finishes if they want to keep their Chase hopes alive.

The high-speed, high-banked oval of Michigan is next on the card as teams look to rebound after a tough week in New York. See if your favorite driver made the grade this week.

To say one has “plateaued” is a description of one’s overall performance, which is erroneous in your Logano spot.. It should not include getting taken out of contention towards the end of a race running a couple of times in the top 5. Nor should it include mechanical failure of any kind that impeded a decent finish, as a great finish was almost a certainty if these pesky issues did not occur.

Agree kb, and why does Kenseth have to return to winning form? This new Chase deal can be won without a visit to victory lane!