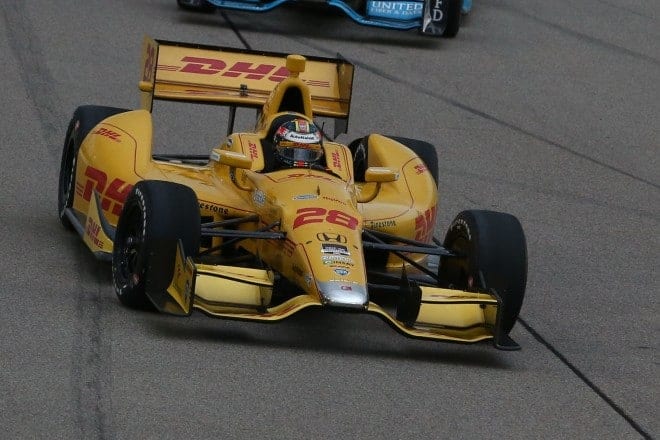 It’s the beginning of the end.

After a weekend off, the IndyCar Series is primed to resume – and in doing so will bang out three weeks of rather varied kinds of racing.  When looking at the schedule and some of its silliness (double race weekends, double points for select races), it’s easy to question aspects about the series.  With that being noted, there’s reason to embrace the end of the IndyCar season.  Short track, road course, big oval.  Three disparate tracks to crown a champion.

The standings are tight – in fact, the tightest with three races to go since 2009 – as Will Power leads Helio Castroneves by just four points.  It should be noted that Power lead the standings at this same point in 2010 and 2012 and failed to win the championship.  Maybe the third time will be a charm, or possibly Castroneves will finally get the elusive Astor Cup.

Ryan Hunter-Reay, who sits third in points, must be considered the favorite.  He’s won the past two races at the track, with Castroneves finishing second last year. Meanwhile, one driver who gets overlooked, especially as he’s known for his road course excellence, is Sebastien Bourdais, who won at Milwaukee in 2006 in the Champ Car series.

Other than the championship race, there hasn’t been anything in the way of a major announcement in IndyCar.  Maybe quiet is good.  The one topic that continues to get some notice is whether Simon Pagenaud might make the move to Andretti Autosport for 2015, which would mean that James Hinchcliffe would be searching for a ride.  It looks like the new silly season for IndyCar will come during the offseason.

The series has not always done well at getting butts in the seats and the race will, no doubt, be under scrutiny in that area.  Team Penske has seven wins at the track, Andretti five, and Target Chip Ganassi, four.  But Andretti seems to be the strongest there of late, with Hunter-Reay, Marco Andretti, and Hinchcliffe, who has never finished worse than sixth, leading the way.

Power holds the top spot, but only four points ahead teammate Castoneves.  Sitting behind the two Penske drivers is Hunter-Reay, who is 63 points back, and then Pagenaud, 64 points behind.  The fifth spot is another Penske driver, Juan Pablo Montoya, who is 101 points behind and mathematically alive but, in a practical sense, out of the championship hunt.

This battle is pretty much over as Chevrolet leads the standings over Honda, 2,141 to 1,362.  The typical amount of points that a manufacturer earns when winning a weekend is close to 100, so with three races to go, Honda doesn’t have a great chance of taking the title.

Will Power.  It seems odd to push the notion that Power should be the driver to watch, but compared to Hunter-Reay and Castroneves, he just doesn’t have the prowess on ovals they possess.

Power has seemingly made strides in this aspect of his career, as evidenced by his win last year at Fontana and his runner-up finish this year at Texas, but it’s still not his comfortable place.  In fact, a top-5 run would be an awesome weekend for him.  He did note in a conference call this week that he likes the track and that car setups for long runs are going to be the key.

There isn’t much for this part; the focus will likely be on the championship standings and attendance.  It wasn’t that long ago – 2010 – that the Mile was dropped from the schedule, and Andretti, who has a major interest in putting on the show, continues to fight fan malaise for the event.  Might this aspect be something that has turned around like the series seems to have done?

Toni Montgomery believes that Ryan Hunter-Reay’s love of the track will spur him to victory, while Matt Stallknecht sees his teammate, Marco Andretti, breaking through for a win.

It’s Tony Kanaan who earns the win and atones for the one that got away at Iowa.  He’s won twice there and has six top-5 finishes in his last nine starts.

The series heads west to close out the season.  Up first is the road course at Sonoma, where Will Power won in 2013.  The race will be on Sunday, Aug. 24, at 4 p.m. EST.  NBC Sports Network will once again be the network showing the race.