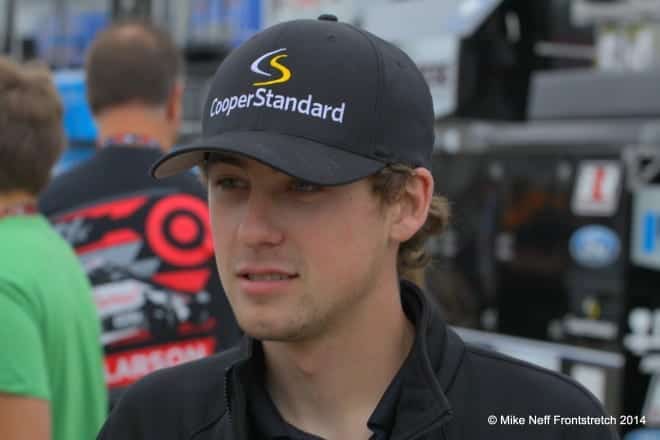 Wood Brothers Racing has named its guy for 2015.

On Thursday (Aug. 14), the longtime race team announced it would form a technical alliance with Team Penske for the 2015 Sprint Cup Series season and will race a minimum 12-race schedule with current Camping World Truck Series points leader Ryan Blaney as the driver of the iconic No. 21 Motorcraft Ford Fusion.

“Wood Brothers Racing is excited to align with Roger Penske and his team and we couldn’t be more pleased to put Ryan Blaney in the No. 21 Ford Fusion,” said Eddie and Len Wood, co-owners of Wood Brothers Racing, in a joint statement. “Ryan is a third-generation racer and one of the best young drivers out there. He has been a winner in many different kinds of cars since he started racing at a very young age and we fully expect that to continue while he is with us.”

Blaney, who has been a Team Penske developmental driver since 2012, currently drives the No. 29 Ford for Brad Keselowski Racing in the Camping World Truck Series, where he holds a seven-point lead over Johnny Sauter coming into this weekend’s race at Michigan.

The son of Dave Blaney showed his appreciation towards the Wood Brothers and was thrilled about the chance to drive such an iconic car.

“I want to thank Wood Brothers Racing, Team Penske, Ford Racing and everyone at Motorcraft and Quick Lane for the opportunity to race next season in the Sprint Cup Series,” he said. “To get a chance to race at the top level of NASCAR in such a historic car as the No. 21 Motorcraft/Quick Lane Ford Fusion is a dream come true. I’m really looking forward to 2015.”

On top of his schedule on the Cup Series side next season, Blaney is expected to drive full time for Team Penske in the NASCAR Nationwide Series next season, where he has one career win at Kentucky Speedway in September of last year – though nothing has been set in stone.

Blaney will make his Wood Brothers debut in the 2015 Daytona 500 and joins an impressive list of legends who have drove the Wood Brothers No. 21 car, such as Glen Wood, Junior Johnson, Cale Yarborough, A.J. Foyt, David Pearson, Bill Elliott and Trevor Bayne.