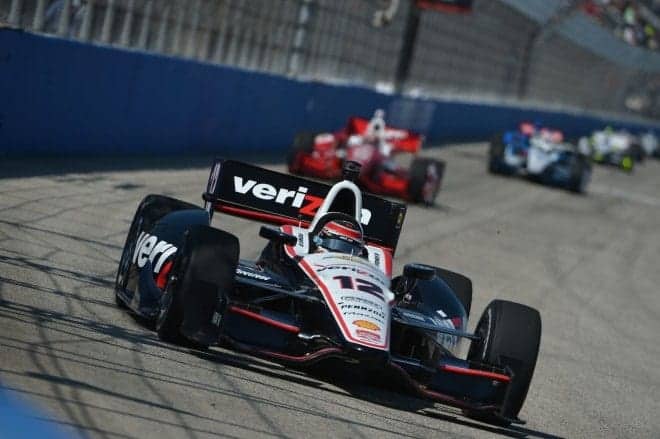 In a Nutshell: Will Power made the field look silly at a track he was supposed to struggle at, and in doing so inherited the championship points lead.

Key Moment: The key moment of the race was perhaps on Friday afternoon when Will Power won the pole for the race. Power was hardly challenged during the race, leading 229 of the 250 laps. His pole run helped facilitate the in-race dominance that would follow.

– Power’s only true challenge on the day came in the form of Tony Kanaan. Kanaan, who started 2nd, hung with Power throughout the early portion of the race and occasionally pressured Power for the lead, but ultimately, Power proved to be too much to handle.

– Helio Castroneves, Power’s primary challenge in the championship race, was a non-factor in the race. On a day where Power stepped up to the plate in terms of the point’s fight, Castroneves was anemic. He wound up a disappointing 11th, thus allowing Power to jump to a 39 point advantage in the points standings.

– Another day, another disappointment for Ryan Hunter-Reay. Hunter-Reay looked great early in the going, and stormed from 19th to 11th in the opening stint of the event. It looked as though he would shock everyone and challenge for the win at one point. But alas, mechanical gremlins ruined his day for what seems like the millionth time this season, leaving him 21st in the final tally on the day. Luckily for Hunter-Reay, the weekend wasn’t a total loss, as he announced a contract extension with Andretti Autosport and DHL that will keep him with the organization for the foreseeable future.

– Josef Newgarden impressed once again on Sunday. Earlier in the weekend, team principals from Newgarden’s team, Sarah Fisher Hartman Racing, announced that the team will merge with Ed Carpenter Racing starting in 2015. On the heels of the announcement, Newgarden delivered one of the finest performances of his career, running with the leaders for much of the day and coming home a solid 5th. With the added resources of the Ed Carpenter Racing team in the pipeline for next year, big things could be coming for young Newgarden in the near future.

– In terms of action, the race was sorely lacking. Oftentimes you get a race where one guy dominates and not much else happens. Sunday was that sort of day. Aero issues largely ruined the race as only a select few cars (namely Power) were able to pass with any degree of regularity. It may be time for IndyCar to take a look at the aero configuration used for Milwaukee, because the current one just doesn’t work for the track as it stands right now.

– It wasn’t necessarily a huge story or even much of a highlight, but Takuma Sato had a pretty beastly save on the opening lap of the race. Sato’s car was dead sideways coming to the green on Lap 1 and miraculously was able to save the car while at least 10 others were around him in tight formation. Kudos, sir.

– Unfortunately for IndyCar, Milwaukee once again disappointed in the attendance department. The stands were a quarter full at best, and with many rumors swirling about the dissolution of this race for 2015, the empty stands certainly will not be helpful for the track’s inclusion on the schedule for the future in the series.

Notable Driver: Will Power.  He wasn’t supposed to win here, but he did. With only two races left on the schedule, Power has successfully gotten past all of the major obstacles that were supposed to stand in his way. Power’s dominating performance on Sunday, should he end up winning the championship, will likely be remembered as the pivotal race in Power’s title run. With Milwaukee out of the way, Power simply needs to keep his momentum alive and deliver solid runs at Sonoma and Fontana to help seal up his first ever title. Considering he won at each of those tracks last season, it’s looking like he’s got as good a chance as ever to finally win that elusive IndyCar Series title.

Helio Castroneves: “”It was very difficult to get close to someone; we did struggle with handling. It was just one of those days.” – Castroneves on the aero issues that plagued the race.

Ryan Hunter-Reay: “It’s one thing off the mind. To go into the offseason knowing that I’ve got a three-year commitment is excellent.” – Hunter-Reay on the security offered courtesy of his contract extension.

Will Power: “”Oh, man, I love winning on ovals.” – Power on his dominating day.

What’s Next: The wine country of Sonoma, CA will be the site of the penultimate round of the 2014 Verizon IndyCar Series season, and the race can be watched live on NBCSN at 4pm EST next Sunday, August 24th. With the championship battle reaching a crescendo, you may want to tune in for this one.