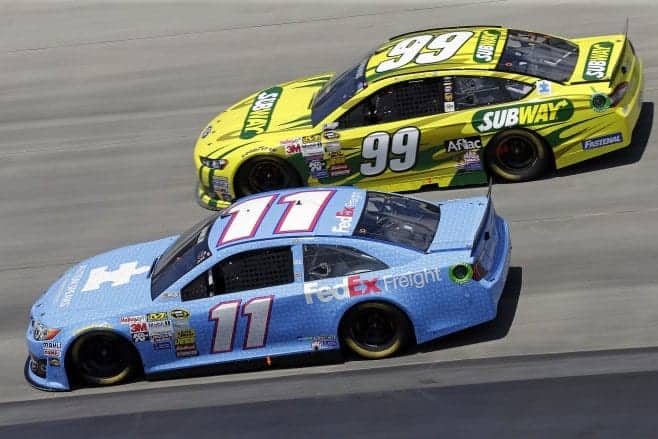 In what the race team is calling an “unprecedented announcement [that] will have impact across four NASCAR racing series”, Joe Gibbs Racing will hold a press conference at the team’s Huntersville, North Carolina race shop Tuesday morning at 10 a.m. ET.

According to Motorsport.com., the much anticipated announcement will be to name veteran driver Carl Edwards as a fourth driver for Joe Gibbs Racing. Perhaps the worst kept secret in racing, the only official announce that has been made at this point is that Edwards is indeed leaving Roush-Fenway Racing and Ford at the end of the 2014 season. Prior silly s

eason rumors had Edwards potentially in a third car at Penske Racing but those rumors were shot down by both Roger Penske and Ford.

Edwards was been with Roush Fenway Racing since the beginning of his NASCAR career, racing a full schedule for then Roush Racing in the Camping World Truck Series in 2003. Edwards worked his way up to the Sprint Cup Series, running his first full season in 2005. Though Edwards has finished in the runner-up spot in the championship twice in his career, the 35-year-old driver has struggled as of late. Even with two wins this season, Edwards has struggled with consistency and lacks the same “spark” that he had early on in his career.

Edwards would join Kyle Busch, Denny Hamlin, and former RFR teammate Matt Kenseth at JGR. Kenseth left RFR for JGR in 2013 and went on to win seven races and finish second in points.

Other expected news at this press conference is the signing of 22-year-old Drive for Diversity standout Daniel Suarez to a full-time NASCAR Nationwide Series deal in 2015. The Mexican-born Suarez has seen time in a Nationwide car for Joe Gibbs Racing, making his inaugural start at Richmond International Raceway earlier this season. He finished 19th. Suarez currently drives in both the NASCAR K&N Pro Series, and the NASCAR Toyota Mexico Series

In addition to the three Sprint Cup teams JGR fields, the organization has also fielded three Nationwide Series teams this season with the No. 11 of Elliott Sadler; the No. 20 driven part-time by Matt Kenseth, Kenny Habul, Sam Hornish, Jr., and Michael McDowell, and the No. 54 Toyota driven part-time by Erik Jones, Daniel Suarez, and Camping World Truck Series standout, Darrell Wallace, Jr.

What this announcement might mean for veteran driver, Sam Hornish, Jr. is unclear. According to a report from NASCAR.com, the driver said he’s unsure on how he fits into JGR’s plans for next season.

Fronstretch.com will follow up with this story after tomorrow’s press conference.

Though not a surprize, it is a disappointment that yet another good driver in the Ford camp is jumping ship. I cannot blame him, given that Roush is in a major free fall to being a 20th-place-or-worse organization. But, Carl leaving Roush for Gibbs reminds me of what someone once told me that, “The grass isn’t always greener on the other side of the septic tank”. (OK, so the real saying is, “The grass is always greener over the septic tank”, and I apologize to any fans of Erma Bombeck for the misquote, but it still holds true!) And if there was ever a “septic tank” in NASCAR, it has to be Gibbs, with egotistical whining crybabies like Kyle Busch and Denny Hamlin. Carl and Matt must have patched up their differences for Gibbs to do this.

As a diehard Ford guy, all I can say is, good luck at Gibbs, Carl. I won’t cheer for you in a Toyota, but I wish you no ill will. ,