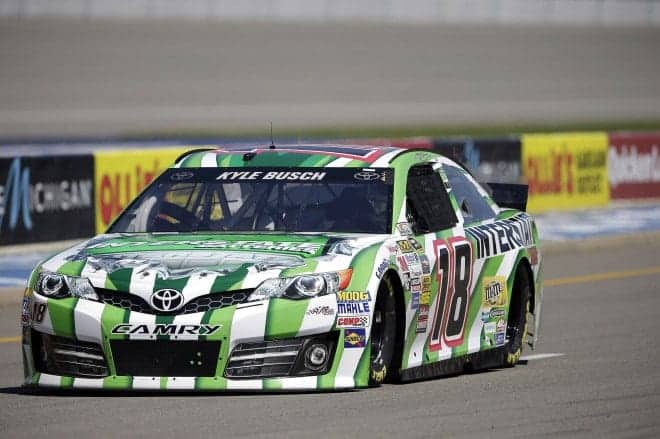 While household names such as Jeff Gordon, Dale Earnhardt Jr., and Brad Keselowski continue on a road to success even with a few speed bumps along the way, Sunday’s Pure Michigan 400 saw Kyle Busch put out of contention early for the third race in a row.  His talent has never been questioned and he has the ability to win on any track, but the result hasn’t been there lately.  The problems have each appeared to be mechanical, driver-related, and circumstances completely out of their hands.  The ongoing issue gathered the most attention earlier in the season when going for a three race sweep at Dover International Speedway, a wreck less than 50 laps after rocketing to the lead for the first 81 laps suddenly put an end to the dream weekend.

An average finish of third in the Nationwide Series, and a perfect record in the Camping World Truck Series, that came to an end on Saturday, shows that Busch can get the job done as a driver this season.  He even won a Super Late Model race mid-week at nearby Kalamazoo Speedway.  Obviously the level of competition in Sprint Cup is of a higher caliber, but after quite a few years now this story is nothing new.  So what is the formula that seems to be prohibiting him from consistently being a championship consideration at the top?

Many, including myself, thought that the pairing of Busch with crew chief Dave Rogers in late 2009 would be something fierce.  They have enjoyed success, but it doesn’t seem like results have maintained as expected or exceeded previous performance.  Perhaps it is time for a change.  Matt Kenseth remains in a consistent championship form, but is winless in 2014.  If not this year, maybe next year why not switch crew chiefs?  Jason Ratcliff and Kyle have 36 Nationwide victories together, and we’ve witnessed crew chief swaps work wonders in the past with various teams from Richard Childress Racing to Hendrick Motorsports.

Perhaps instead it’s a solution that runs even deeper within the Joe Gibbs Racing organization.  There is a history of parts failures that have set a positive direction backward on more than one occasion.  The old saying races are won back at the shop may be more important now than ever.  The competition is so tight that the smallest experiment, change, or analysis could be the difference between achieving a crucial win and being out to lunch when it gets down to crunch time.

It’s actually one reason why I would like to see Cup organizations bow out of the Nationwide Series.  The operations are managed by some different players, but from an overarching perspective, having three (and likely four next year) Cup teams and three full time Nationwide teams is a lot to handle no matter which way you shake it.  The performance across the board should be shifted to the greater priority, which would be the Sprint Cup title.

Speaking of priority, maybe some of it should fall on the driver.  Kyle Busch wears many hats in stock car racing with all of his driving duties and his team ownership.  Then there’s also his foundation work among activities he is involved with outside of the race car or shop.  There may not be another driver who multitasks and is good at it more than he is.  He has lots of folks doing much of the legwork, but Busch himself wants to be in tune with all that is happening.  He has the right to be involved in what he enjoys, but at what point is it at the expense of a championship that still (besides a 2009 Nationwide title) eludes him.

In all aspects Busch and the No. 18 team owe it to their sponsors, especially M&M’s which has re-upped their support through the 2017 season, to be focused primarily on a championship effort.  No one is getting any younger.  The progression is there.  Now the performance has to be finalized.  A best finish of 39th in the last three races is inexcusable, no matter which parties the onus is on.

Kyle Busch needs to get his head in order. Until he can deal with adversity without self-destructing he will always fall short of his potential. Look back to last week at Watkins Glen. He pretty much took himself out when he lost his temper trying to pass Martin Truex.

Kyle Busch is his own worst enemy. He can wheel a race car, no doubt about it, but the demons that run around inside his head (and I imagine are the same ones that are part of his brother’s psyche) get the better of him time and again.

Self-control needs to go along with car control.

Frankly I’m surprised Kyle has stayed with JGR. Considering the problems Toyota seems to have. But then, where would he go? I will always believe that if he’d stayed in the 5 car, he’d won a championship by now. But Hendrick dumped him after the COT comment to pick up JR.

He seems to have lost some of his edge.

Bill B
Reply to  rascalmanny

Ha, HMS dumped him more than just the COT remark:
1) His attitude can destroy the positivity and team cohesiveness ultimately affecting the entire organization.
2) He left the track after wrecking in one race and wasn’t around to drive it when the team got the car able to re-enter the race (a cardinal offense…, could you just walk out of your job during the work day without being officially dismissed if something that you needed to do your job broke or wasn’t working)
3) Dale Earnhardt Jr is the most popular driver, can bring a ton of money into the organization, and doesn’t have a disruptive personality that will affect the larger organization.

Maybe we should just accept the fact that Kyle Busch is a heck of a Nationwide and CWTS driver but will never be a champion in Nascar’s top series. He has the talent, he just doesn’t have the temperament for it.

A classic case of Karma, or what we say in the south: ” what goes around, comes around”. Right Carl?

Carl Kaminer
Reply to  Fed Up

I think it is simple. Any of us that have had to work two jobs at a time knows that it is impossible to do both as well as we could do one or the other. I always thought Mark Martin never won a Championship because all his playing around in the Busch series caused him to put less than his full effort in his Cup ride. It is simple human nature. If Kyle Busch would focus his efforts on the Cup he certainly has the talent to go all the way. An added bonus would be that the NW series may become watchable again (Japanese truck racing may be too far gone.)