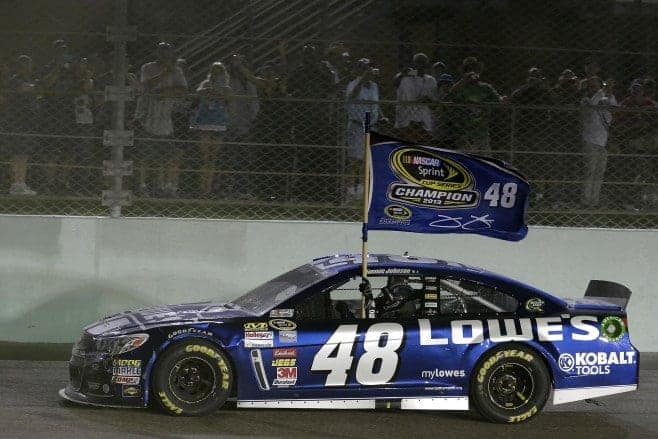 Johnson was a master of the old Chase, but the new playoff format has given him issues. (Photo: CIA Stock Photography)

Since posting his third victory of the season at Michigan in June, Jimmie Johnson hasn’t been posting the finishes that fans are accustomed to seeing for Johnson, Chad Knaus and the No. 48 Lowe’s team. In the eight races that have followed since the victory, Johnson has only three top-10s and three finishes of 39th or worse.

It’s no surprise that he is looking for a way to change his luck, and that begins this weekend with a change in the paint scheme. Johnson announced via twitter that he will be bringing back the blue paint scheme on the No. 48 that fans saw  last year, versus the white paint scheme they’ve run so far in 2014. He attached an Instagram slideshow that backs up the reasoning for the change with some of the “not so hot” moments from the 2014 season thus far.

I’m not superstitious… But just in case. #MyBoyBluehttp://t.co/7yLapKLLgo

The logic behind the change does make sense, looking at the season so far, as Johnson’s three top-10s in the last eight races came with a car that was primarily blue versus white – whether the Kobalt colors or the Jimmie Johnson Foundation colors. His three victories this season have come in cars that are primarily blue with his win at Charlotte in May done in the patriotic Lowe’s blue car and the victories at Dover and Michigan coming in the Kobalt colors.

Perhaps the change from white to blue is what Johnson and Knaus need to turn the ship around as teams get closer to the Chase for the Championship and Johnson goes after his seventh Sprint Cup Series title. Johnson currently sits seventh in points heading to Bristol Motor Speedway this weekend with three wins and 13 top-10s in 23 races so far.

That’s what I like to see.. the #48 team so worried that they start grabbing at straws like changing the color of the car. He’s another nifty idea, Chad… put some Rain-X on the windshield so the air will just roll over the car. You should be back to your winning ways in no time.