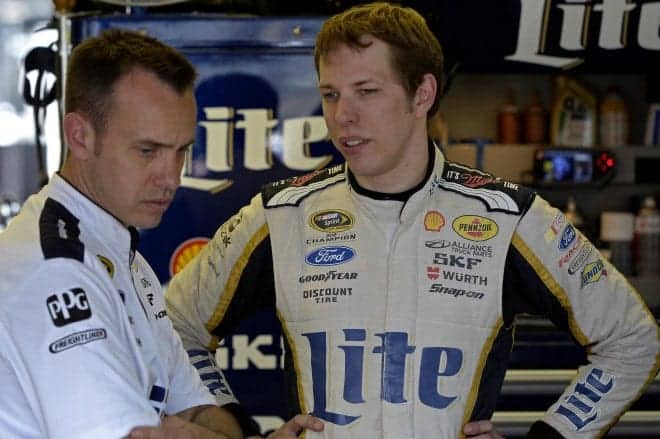 With the new Chase format this season, everyone seems to be paying more attention to how many wins each driver has, even more so than they did in the past. Obviously it’s because wins are what truly matter in NASCAR’s new Chase grid, and as the beginning of the Chase nears ever closer, those wins count now more than ever.

Jeff Gordon won his third race of the season last Sunday at Michigan, which ties him for the most this year with teammates Dale Earnhardt, Jr. and Jimmie Johnson and Penske Racing driver Brad Keselowski. With three more races to go until the cut-off point, obviously the drivers with the most wins will have the biggest advantage, but are Gordon, Earnhardt, Johnson, and Keselowski the favorites?

One could make a compelling argument both ways, though I tend to side with “yes”. Though wins are weighted more heavily in this Chase format than any other points structure in NASCAR’s history, consistency will still matter, and Gordon and Earnhardt are first and second, respectively, in the current season. Clearly, they have the winning and consistency model down pat at this point, which means that they are obvious favorites if they can keep it up from the beginning of the Chase all the way through the end of the season.

But where does that leave Johnson and Keselowski? Considering their multiple trips to Victory Lane, aren’t they counted as favorites too?

Johnson and Keselowski automatically earn a championship-worthy nod by virtue of their being past champions, along with their win totals this year. Plus, Johnson always seems to turn up the heat once the Chase starts. And Penske Racing has been one of the stronger teams all year, meaning Keselowski is in great position to make a run at the title.

I don’t yet feel comfortable predicting which four drivers will be the last four standing at Homestead, but I wouldn’t at all be surprised if it were these four drivers. Then again, time and again, the Chase brings along a new competitor no one gave any thought to prior, and a surprise contender could very well sneak in and take one of those spots. It’s hard to gain a stronghold on the whole picture of this season when we don’t even yet know what we’re looking at.

And if Bristol’s history means anything, this weekend might very well shake things up. Would anyone be surprised if Joey Logano, Kevin Harvick, or Carl Edwards won their third race of the season or if someone pulled through for their first?

Yeah … suddenly Saturday night seems like a long ways away.

“Was Kyle Larson’s reaction to his crash what NASCAR was looking for? He seemed to do what they were asking but he was still standing awfully close to his car. What if there had been an explosion or something?” Daniela

NASCAR seemed satisfied enough with Larson’s decision to get out of the car but remain where he was until safety crews got to him. I kind of had the same thought process you did, though. There were still flames and smoke pouring out of that car, and he was standing just a few feet away from it, at a distance that, on television at least, looked unsafe. I know I wouldn’t want to stand that close to a flaming car, and if I had a family member in the race, I definitely wouldn’t want them standing that close either.

I understand NASCAR’s decision to implement such a rule, but I think Larson would have felt safer walking away from the car over to the safety crews instead of standing next to a fire until he was told he could move. It’s not like he was going to have to run into traffic to do so. He could have just walked along the wall or over to the area the safety crew already was. I don’t know that NASCAR would have penalized him had he done that, but the fact that he remained standing next to a flaming car because he might get penalized if he went even further seems to be counterintuitive to what the rule intended in the first place—to keep drivers safe.

That was the real first test of NASCAR’s new safety rule and I wish it hadn’t gone like that. I understand not wanting drivers to run out in front of other cars in the heat of the moment, but I wish Larson hadn’t felt the need to stay where he was. Standing outside of his driver door was not safer than walking away towards the ambulance.

“Who were those two that gave the command before the race?? They were TERRIBLE!” Jacquelyn

That would be Charlie White and Meryl Davis, 2014 Olympic ice dancing champions. They are both Michigan natives so they seemed like obvious choices to give the command, I suppose, but a little bit more enthusiasm wouldn’t have hurt them either. I don’t know if their underwhelming command was planned or spur of the moment, but I would almost prefer the over-enthusiastic commands from celebrities like Adam Sandler or Kevin James. At least they have some fun with it.

Either that, or tracks can have fans give the command more often. I could see where that would go wrong too (fans only telling their favorite drivers to start their engines or carrying it on longer than they need to). But, hey, fans invest time and money into this sport unlike any other fan base out there. I think a great reward would be allowing them to say the most famous words in motorsports.

Either that or the celebrities that the tracks tab to give the command could at least pretend like they care. It would certainly go a long way.

“Did NASCAR make any decisions at the test to help make the racing better? I’m glad they are working on that because I hate watching these glorified parades on TV.” Deidre

The intention of the test session wasn’t to make an announcement but rather to try a variety of different car setups and rules packages to see what best simulates good racing and competition. I feel like that’s a tough thing to do with just a few cars in a non-competitive event, but NASCAR decided anyway to run a test session at Michigan International Speedway to do just that.

Matt Kenseth and Danica Patrick were both at the test and gave some input and thought into what NASCAR was trying out. For instance, Kenseth said he preferred less downforce and more horsepower, a package that NASCAR was testing. However, no one from the sanctioning body gave a definitive answer as to what they were leaning towards.

I think the racing has been generally good this year, but I always get the sense that my expectations aren’t as high as others. But I think it’s pretty obvious that NASCAR is investing a ton of time, money, and resources into improving the racing on the tracks that need it most—tracks like Michigan, Kansas, Chicago, etc., where racing tends to get strung out. I don’t know how successfully they can do that—teams will always find a way to outrun their competition—but I admire their effort in trying and hope they will be successful.

Personally, I’d love for them to return to the style of racing they had back in the early 2000s. Racing on intermediates wasn’t the best form of racing then either, but track position didn’t have near the premium that it does now and things like tire strategy and fuel mileage still mattered. The fastest cars had the best chance of winning, as opposed to now when the driver with clean air has an enormous advantage. Those things have improved slightly this year, but it’s still a problem.

I don’t think all of those things are black/white or good/bad, though. A nice balance of all of those aspects would generate some fantastic racing but it’s very difficult to do, and one thing NASCAR won’t do is go backwards. But I think they are heading in the right direction.

I agree that the racing has been pretty good this year, but like Summer I do not have the expectation of a last lap pass for the win in every race. I must be missing something because to me the only real hindrance to much improved racing is aerodynamics. Breaking aero dependency and actually allowing the cars to pass each other should not be that hard to do. Get them off the track, open the wheel wells, maybe even get all the tape off the grill.

I had the same thought about the new rule actually putting the drivers in more danger and Larson’s reaction proved that it is a possibility. I was thinking more about a driver having second thoughts about getting out of a burning car due to the possibility of a penalty. I know that 99 times out of 100 they will be bailing out, penalty be damned, but what if that one time someone hesitates for just a few seconds and it leads to an injury or worse. On the other hand it could lead to increased safety because in lieu of a car on fire, the driver is really safer in the car, protected by the roll cage. It is possible for a car to accidentally run into a driver during caution, even if the driver is not standing near the racing groove. I mean, JPM hit a jet dryer under caution.