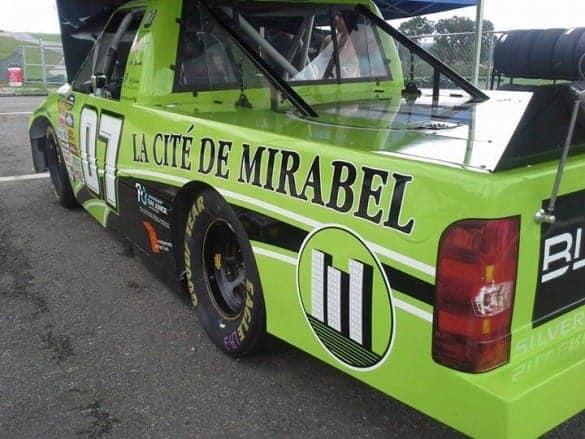 Courtemanche, Jr. tested a truck earlier this month at the Virginia International Raceway road course to get used to driving the more powerful vehicle.

“The first thing that hits you is the extra torque and acceleration from the 750hp engine, a 250hp jump from the Canadian Tire Series car,” he commented post-test, according to a team press release. “You get comfortable with the power after seven or eight laps, and then discover the extra braking, corner speed and efficiency of all on-board systems. The acceleration and extra speed force you to pay very close attention to every bump and slight change of direction and to manage wheelspin and the extra braking power.”

On hand for the test was road course specialist Alex Tagliani, who has experience on road courses behind the wheel of a Nationwide Series car, a sports car and a Verizon IndyCar Series car. Tagliani coached Courtemanche, Jr. throughout the test. Tagliani will also make his Truck Series debut at CTMP, driving for Brad Keselowski Racing.

“You get much more out of the truck – power, braking, stability over bumps, overall quality and finish, and a certain willingness from the truck to go quickly as you gain speed and familiarity with it,” Courtemanche, Jr. continued. “I know that my driving has improved and I will be quicker and more at ease in my NCaTS car.”

Courtemanche, Jr. will pull double duty at CTMP as he will also run the NASCAR Canadian Tire Series race that is scheduled for race morning. Currently sitting 12th in the NCaTS standings, Courtemanche, Jr. has one top 10 finish in five races thus far this season.

“I train for strength and endurance every day, and will have a trainer with me at the track to help with my physical form and my nutrition,” he commented. “This will certainly be an extreme experience and I want to get the most out of it. I will not leave anything on the table… or on the track in this case.”