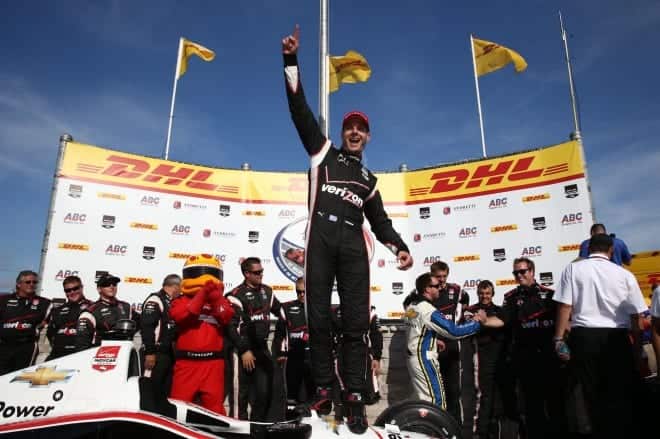 Will Power is entering this weekend's race at Sonoma fresh off a victory at the Milwaukee Mile.

Will Power somehow extended his lead from four points to 39 over Helio Castroneves at Milwaukee.  Somehow?  Well, Power has frequently struggled when racing on oval tracks, something he has frequently admitted.  At the Milwaukee Mile, however, he displayed a rare sense of calm and confidence, earning the pole and then leading for much of the race – only pit stop strategies seemed to take him out of the lead.

Now, with two races left, Power sits in the prime spot, holding the edge as IndyCar visits Sonoma and then Fontana, both tracks where he won in 2013.  That would ostensibly make him the favorite.

The trouble here is that these leads often fail to hold in IndyCar, and from an entertainment perspective, that’s a wonderful thing.

Last year Castroneves built himself a bit of a cushion as the season rounded into to the final straight, and then watched as Scott Dixon drove right past him.  Castroneves endured a dreadful spell at Houston in 2013, which was then followed by Dixon taking Mid-Ohio and positioning himself with a lead when things got around to Fontana.

Power brings a different level of torment to these final races, having been the runner-up more times than he’d like to discuss (that would be three times already).  Oh wait, his teammate who is battling him for the Astor Cup, Castroneves, also has a similar sense of heartbreak, having finished second in 2002, 2008, and 2013.

The press releases for IndyCar tout that there are still other drivers mathematically in contention to win the title (six apparently), especially as the race in Fontana will count for double points.  That PR business aside, it’s not likely.  Simon Pagenaud, sitting in third, is 92 points back, with Ryan Hunter-Reay 108 behind.

Pagenaud is a surprise and Hunter-Reay has to be considered a bit of a disappointment.  For a driver with three wins at Milwaukee, his early retirement had to be deflating on both a micro and macro level.  It would be likely that he felt confident about a positive result at the track, something that seemed likely as he was one driver who could move through the field, only to watch his day fall apart in a torment of mechanical gremlins.  Not only did he fail at a track where he expects success, but he is no longer a realistic championship contender.

The fuzzy numbers that INDYCAR uses to push who’s in contention should be recognized here.  It’s no different than the NFL espousing that XX number of teams have the possibility of making the playoffs with XX number of games remaining.  But really, unless an asteroid crashes into the Penske Power motorsports complex, things look good for that organization.

So back to Power and Castroneves.

Castroneves has won at Sonoma before, in 2008, and seems to knock out top-tens at will in the Napa wine country.  He’s the most well-known driver in the series thanks to his success on “Dancing with the Stars” and continually gives some of the most upbeat interviews from any racer on the planet.  Better stated, he has to be counted as the crowd favorite, even though that might not be the same thing as what the fans of the series may consider.

Then there’s Power.  Remember his double-bird salute at New Hampshire a while back?  Or his contentious relationship with other drivers, see: Franchitti, Dario.  He added to that reputation this year by battling his good friend, Simon Pagenaud, at Long Beach in a manner that created a rift in their relationship.  For all of Castroneves’ affability, Power is seen as cutthroat and ruthless, and frequently reckless.  Yet, he’s sitting with a series-high three wins and three poles, so he must be doing something right.

Can Power hold on?  While it might be easy to declare that Sonoma is exactly the kind of track where a rival might rub him on the course, saying “I just got loose into that corner and Will was there,” the likelihood is that the other drivers are cognizant of what is at stake – not only would that driver be affecting the championship, but that driver would also get stamped for next year.  That means that aside from normal road course frustrations, which can vary wildly depending on caution flags, that the other drivers are likely to leave Power and Castroneves alone as long as neither does anything stupid.

That idea is a wonderful one to believe, allowing for the concept of driving prowess to be the marker for how things happen.  And in that regard, Power enjoys a bit of faith in his abilities, having won at Sonoma in 2010, 2011, and 2013.  Sure, past success can be an indicator of future performance, but that didn’t work out for Hunter-Reay at Milwaukee, so it means that nothing is certain for Power, but it does mean that there has to be a certain level of expectation, and the attitude that Power has shown all year may be the key to this weekend.

The question that may come from this weekend is a different one.  Are the fans of IndyCar ready to embrace the prospect of Will Power winning a championship?  Or are their finger’s crossed in that he might experience a mechanical failure and fall through the field?  Seems like the reason that championship battles are so compelling.

Double points at Fontana may change the championship dynamic as well. Power seems to be dealing with the pressure more effectively this year, but personally I am hoping for a miracle comeback from Helio.