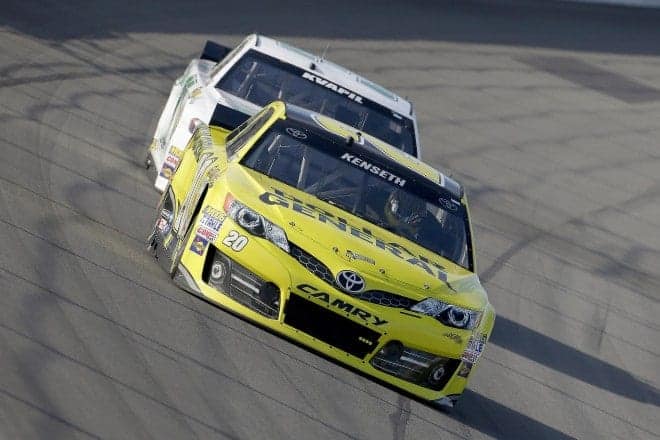 I had the pleasure of being in the Charlotte area this week and spent one of those days doing something that I had wanted to do for quite some time. That was take a tour (of sorts) of several NASCAR team buildings and shops.

These weren’t scheduled, it was just sort of a random thing with my 11-year-old son mapping out the sites. One of the neat things about the tour was seeing some of the winning cars out on the display floors at some of the shops. There was Matt Kenseth’s Daytona 500 car, with confetti still on it, at the Roush museum and store.

But given this week’s race is at a short track at Bristol, I couldn’t help but take special notice of Kurt Busch’s car that won this year at Martinsville at the Stewart-Haas shop. It was banged up all over, especially on the driver’s door side and along the bottom skirt. It was just a reminder of how much bumping and banging goes on among these cars at the short tracks. And it was also a reminder that drivers need to know going in that it’s just the way you have to race at places like Martinsville and Bristol.

So, when looking at picks this week, you can’t help but think of the drivers who seem to be able to handle that physical style of racing the best.

Jeff Gordon certainly has some momentum these days, now with three wins on the season. And that’s never a bad thing to have when it comes to NASCAR. Any thoughts about whether he and his team were capable of recapturing some of his past championship magic are gone now. And there’s reason for optimism for Gordon this week, too. He has three top 10s in his last five races at Bristol, including a seventh in the spring race there. And for his career, he has five wins there and has led an active-driver best 2,703 laps. With the way that team is going now, it won’t be a surprise to see Gordon add more laps led to that amount.

Since Kurt Busch fared well at Martinsville, it’s hard to not give him at least a mention for Bristol, even though he didn’t fare so well there in the spring race. Busch, however, does have five career wins at Bristol and has 14 top 10 finishes in 27 career races there. And the key for him, and others, is he is not afraid to mix it up. The other key for him, and he’s been quite a bit better at this for the last year or so, is to not lose his cool when somebody mixes it up with him.

And you can’t mention Kurt Busch, without mentioning Kyle Busch here, too. He also has five career wins at Bristol among his eight top 5 finishes in 19 races there. Kyle Busch also has led 1,503 laps in those races and has a career average finish of 10.89 there, the best among active drivers not named Kyle Larson, who has just one career Sprint Cup finish at Bristol.

One driver who has fared well in Bristol at recent races and who is among those looking for a win to make the Chase is Kasey Kahne. Yes, he’s still the only Hendrick Motorsports driver to not win this year, but he does have a win among his four top 10 finishes in the last five races at Bristol. Kahne has also led 167 laps in those races. Maybe this is his week.

The first name that comes to mind in this category, those on the B list in the Yahoo! Leagues, is Brad Keselowski. The short-track style is his brand of racing, you know, where it’s OK to use the bumper to help with a pass? And wouldn’t it be interesting to see Keselowski and Kyle Busch duel it out in the late laps for a win? You know one wouldn’t be afraid to move the other out of the way, especially for a win. Keselowski has one win in the last five races at Bristol and also has another top 10 finish in those races while leading 334 laps. Keselowski was kind of in the middle of the pack at the spring Bristol race this year, finishing in 14th, but he did lead 40 laps.

Carl Edwards made big news once this week with the officially announced change from Roush-Fenway Racing to Joe Gibbs Racing beginning in 2015. He also made big news earlier this season by winning at Bristol, so he has to be considered a factor this week, too. One thing to keep in mind though, is that win was Edwards’ only top 10 finish in the last five races at Bristol. Also, even with that win factored in, Edwards’ average finish in those five races is 23.80. So, maybe a bit of a warning sign there.

A driver who has been a little quiet lately, but definitely knows how to get to the front at Bristol is Denny Hamlin. He has one win in the last five races there and also has another top 10 finish in those five races while leading 469 laps. Hamlin was sixth in the spring Bristol race, so he wasn’t too far off the mark there.

Sure, the big focus for Marcos Ambrose to try and make the Chase was to win at Watkins Glen. He fell just short there, taking second. But his next-best chance to win may be at Bristol. Maybe it’s because Bristol brings about that physical style of racing that is also needed on road courses. Ambrose has three top-10 finishes in the last five races at Bristol and was fifth in the spring race. If you’re looking for a bit of surprise pick, this just might be your driver.

We’ve pretty much got the usual suspects here this week, but they are pretty good suspects, based on how they fared in the spring Bristol race.

First, there are top rookie of the year candidates Kyle Larson and Austin Dillon. Larson finished 10th in the spring race and Dillon was 11th. They both showed the toughness and patience needed to survive on the half-mile oval. While Larson is known for his short-track prowess on the dirt, Dillon too is an accomplished dirt racer. Don’t forget he won the first Mudsummer Classic at Eldora last year.

Also, there is Justin Allgaier and Danica Patrick. Allgaier was a very respectable 17th in the spring race and the one-car team has showed flashes of improvement in the second half of the season. Then, there is Patrick, who didn’t hurt your team with an 18th-place finish last week at Michigan. And guess what? She finished 18th in the first Bristol race, too. So, there’s proof that a top 20 finish is quite possible for her as well.

Last week’s results bring us a new leader in the overall standings in the Frontstretch Fantasy League on Yahoo! NoBarNASCAR now sits atop the standings with 6,326 points, just ahead of LeftTurnOnly at 6,296. Rounding out the top five are Mojothemonkey at 6,188, ShadowsPT at 6,013 and SiLo Sounds Racing at 5,965. The biggest movers of the week was Doo Doo Brown Racing and jimmie wins again, each moving up seven spots in the standings.

The top score of the week was 341 points by Bomb Squad (Hey that’s me. How did this happen?). The winning combination was Joey Logano in third, Dale Earnhardt Jr. in fifth, Greg Biffle in 10th and Danica Patrick in 18th.

Visiting the free race shops at Concord & Mooresville is great fun. Seeing the shop activities, museums, and stores are much better than going to the tourist trap in Charlotte. The free RCR operation and museum (fee) are also a nice trip.