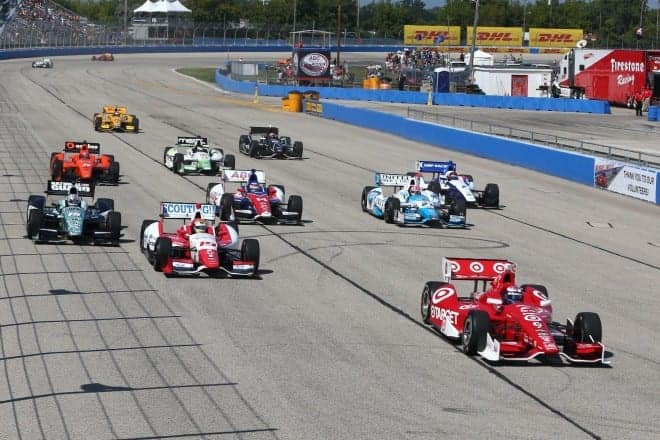 So, let’s rewind for a moment and go back to Michigan.

OK, that may not be the best way to put it, as most fans are happy to put Michigan in the rear-view mirror and look toward Bristol, where the hope is that the track might restore some of its past flavor and produce some good ol’-fashioned dust-ups and some angry drivers.

But the Sprint Cup Series race at Michigan deserves one quick moment of review.

Brad Keselowski bounced off the wall and still finished with a top 10.  For a track where drivers can now put down lap times at nearly 200 mph, that’s incredible.  Of course, Kyle Busch attempted a similar move and pounded the wall and never recovered, which shows the difference between a tap and a punch.

Once again: 200 mph.  With the amazing safety features from both the cars and the tracks, these speeds don’t seem as crazy as they once were, which really is odd.  Bugatti, Ferrari, Aston Martin, Lotus and even Chevrolet (the Corvette) all make cars that float at that fanciful number.  It’s a benchmark and a status.

Yet for some reason, the Cup drivers hitting that speed didn’t seem to be all that, well, stunning.  Part of the problem is that the speeds just don’t seem to translate on TV.  Is the race broadcast part of the issue?  Likely.  All of the quick-cut camera edits and the incessant zooms and pan-outs don’t do the speeds justice.  But maybe 200 mph isn’t all that special anymore?  If a street legal ride can reach that speed, then it’s possible that NASCAR doesn’t offer the excitement it once did.  Consider also road courses and short tracks are where the best aspects of entertainment now reside.

So hooray for Bristol this week.

Happiness Is… the Pole   Funny thing happened last weekend.  That guy Jeff Gordon, who seemingly every writer likes to mention now has gray hair at his temples, earned the pole position and then went out and won the race.  So not only does he continue to add to his win total, but he’s also adding to the number of poles he’s got.  The statistics are just plain gaudy at this point.

It just seems rare anymore for a driver to win from the pole and for Wonderboy to pull it off 23 years into his career has to be even more of an anomaly.

Making last Sunday just as interesting was the fact that Will Power also earned the pole and then proceeded to win his race.  Now, in IndyCar, the feat may not seem quite as interesting, owing to the number of quality rides in the field and that many races are on road courses which allow a driver to race out to a substantial lead.  But Power is no oval specialist, and just earning a win on one is surprising.

So call it a two-fer and a statistical hobgoblin.  Who would ever have predicted they’d both earn wins from the pole?  Would have been a good day to make that bet in Vegas.

Happiness Is… Bristol.  Let’s cut to the chase.

No, not that Chase (though many people would love to just jump to it to get rid of the incessant commentary that revolves around it). The chase that is the bottom line at Bristol.

Bristol got neutered.  Between the changes to the track and the race’s position just before the Chase, drivers don’t drive the track like they once did.

This year there seems to be a different feel about things.  With so many drivers already locked in, they can go about racing however they want – and if that includes displays of frustration, all the better.  In conjunction, there’s still a number of drivers who feel they may have a shot of making the big dance, which means they might drive above their talent or do something stupid.

Basically, the combination between indifference and recklessness is a perfect recipe for Bristol returning to form.  Wouldn’t that be a happy thought.

Happiness Is… Time.  Rain brought about the unfortunate consequence of delaying the truck race until Thursday morning.  This happiness is really a bummer, as not only is the midweek night race a Bristol a treat, but also that due to the jammed track schedule no one could really watch it when it did happen.  Heck, if you were on the West Coast, you could have turned it on and caught it while you ate breakfast.

It’s a bummer that a better time slot couldn’t be found for this event.  Happiness Is continues to believe that midweek night races during the summer are some of the most overlooked ideas in the sport.  Even if it’s just the Truck Series, it needs to be something that happens.

Happiness Is… Another Soap Opera.  Kyle Busch is mercurial.  Denny Hamlin is a diva.  Matt Kenseth is, well, actually, no one really talks crap about Kenseth.

It seems that Joe Gibbs Racing is following in Stewart-Haas Racing’s footsteps and attempting to build a team comprised of personalities that don’t seem like they fit together.  But really, is that such a bad thing?  If it blows up, it’s all the better for everyone who follows the sports.  Just as important, it also seems different than the toe-the-line corporate milieu of Hendrick Motorsports.

Happiness Is… Sonoma.  Two races to go in the IndyCar season.  With Cup racing on Saturday night, that leaves Sunday for a chance to watch the Sonoma race without it battling NASCAR.

Power’s exceptional at the track and holds a 39-point lead over Helio Castroneves.  Can he hold it?  That’s the challenge and also the difficulty in the series.

Hamlin is a diva, LOL, now that is something I hadn’t heard him called. I think I like it. Not sure “mercurial” is the word I would choose to describe KyBu. I can think of other descriptive words but I’ll keep them out of print.

Glad to see someone besides myself hate the constant zooming in and out. It adds absolutely nothing to the presentation.

The truck non race was rained out. Yawn. Did anyone not paid to even notice? What if they gave a truck race and nobody came? Wait! They do.