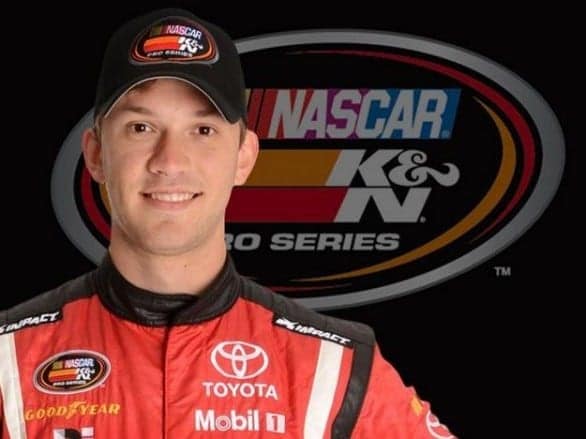 The current young roster of the NASCAR Nationwide Series is brimming with talent – talent that is, it’s a safe bet to say, the future of the sport.

Chase Elliott, Ty Dillon, Chris Buescher, Dylan Kwasniewski and many more are already household names as well as the storylines that have begun to read repetitive. Each is destined for the Sprint Cup Series in the future and will no doubt be associated with the big dog teams like Hendrick, Childress, Roush and Ganassi.

Next season, the series will gain another hot shoe. Daniel Suarez was officially announced on Tuesday at Joe Gibbs Racing headquarters as the team’s new driver for the Nationwide Series.

The NASCAR Drive for Diversity star is currently lighting up the K&N Pro Series East and Toyota Mexico Series with a combined six wins. He leads the latter series’ points with five races remaining in the season.

Suarez will fit in perfectly to the Nationwide Series mold alongside its currents stars that will be returning next season. He’s has a pretty face, he’s well-mannered,  and his stock quickly took off even before the Gibbs announcement. There’s also no reason to believe that Suarez won’t be a hit with the fans, who are gifted another young driver to get behind for the long haul and follow his ascension to the top.

The Nationwide Series will take all the help it can get in trying to counteract the Sprint Cup Series drivers’ dominance. Fresh blood in Suarez will not only do that from a headline standpoint but competitively as well. Driving a Joe Gibbs Racing Toyota is one of the most coveted jobs in the garage and Suarez is no slack behind the wheel. Remember, he qualified, ran and finished in the top 20 in just his first start earlier this year in Richmond.

Suarez will be equally matched with the likes of Elliott, who could very well at that time be the defending rookie of the year and Nationwide Series champion. He has the fire to go toe-to-toe with a Ty Dillon type, too.

Tuesday, however, he was in a dreamland, seemingly beside himself at the journey on which he was embarking.

“This is crazy. This is a dream come true. (If Carl Edwards is excited) can you imagine about me? This is crazy,” Suarez said at the press conference.

“I can’t thank enough to Joe Gibbs Racing for their confidence and support in a driver from Mexico who is 22 years old and also, I can’t thank enough to ARRIS for his confidence. This has been amazing, all the support for this 2014 and also for the 2015 full time in the Nationwide Series and also some races in the Truck Series with Kyle Busch Motorsports. Man, this is amazing. This is amazing. I can’t wait to learn from all these guys.”

Suarez perhaps stole some of the spotlight from Edwards on a day where he was expected to be the main focus – from veteran NASCAR media to Mexican media who couldn’t help but take numerous pictures, provide interviews for the live steam in Mexico City and everything else to bring attention to their native son’s next move.

And Suarez ate it all up; he beamed with pride next to his No. 18 when it was unveiled, took a picture upon picture with it and talked to anyone who came over with a question.

Joe Gibbs, however, now has a tall task in front of him. While the young Mexican will go full-time he still needs to finalize the rest of his program, which currently includes the Nos. 11, 20 and 54, including a basket of drivers. Darrell Wallace, Jr. was also mentioned to be racing for the organization full time in 2015, but no other details were revealed.

The Nationwide Series is just as important to Gibbs as the Sprint Cup Series. The dedication towards putting the best on the track is second to none and shows in the domination with a driver like Kyle Busch in the No. 54.

“We love that series. We love it. We love being in it. We’ve run as many as four cars, that’s a possibility for us,” Joe Gibbs said. “But we definitely will have a strong contingent and we’re working through all those (2015) things right now.”

With Suarez, the organization has grabbed another young driver that it could raise and move through the ranks – after all, developing talent and providing to the series is one of the things Gibbs does best. Daniel Suarez is the next great thing on the list for both the Nationwide Series and Joe Gibbs Racing.

“Daniel is a great addition. He’s just a neat guy. To get to know him has been fun. He just has a great future ahead of him,” J.D. Gibbs said.

“He’s already raced in one of our Nationwide races and done a great job. We’re proud of him, and we’re confident he’ll have an immediate impact in the Nationwide Series.”

How exciting for the young man. If he works hard he can follow half a dozen Cup drivers in superior equipment around and maybe even finish 6th. The dogged pursuit of mediocrity in a racing series without racing. Weeeeee.