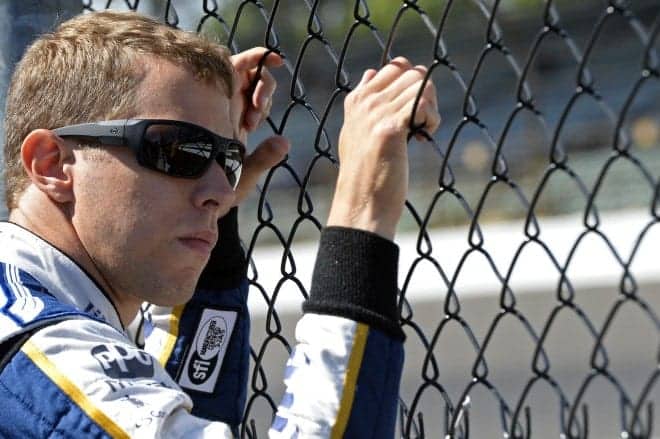 Just moments after Brad Keselowski’s first win in the Camping World Truck Series at Bristol Motor Speedway, the celebration hit a sour note as Keselowski’s No.19 as well Ron Hornaday, Jr.’s No.30 and Cole Custer’s No.00 had issues in post race inspection following the rain delayed UNOH 200 on Thursday morning.

In a statement released by NASCAR. The winning truck of Keselowski, third place truck of Hornaday, and eighth place truck of Custer were “too high in the spoiler” in post race inspection.

Any penalties that will be assessed by NASCAR will be issued early next week. NASCAR eliminated its ride height rule in the Sprint Cup Series at the start of the 2014 season but the rule remains in place for the Truck and Nationwide Series.

Keselowski had the truck to beat for much of Thursday morning’s event, leading three times for a race high 119 laps, while Hornaday started third and maintained that position throughout the race. Custer started second but faded at the end to finish eighth earning his third top 10 in his five Truck Series starts.

Now, now, NASCAR! be careful about your penalties to Brad, Ron, and Custer. You set the precedent back in September, 2005 at Dover when you failed both Jimmie Johnson’s race-winning car and Kyle Busch’s second-place car (who was driving for The Felon at the time) because the rear ends were too high. Apparently, Chad had developed this really neat shock absorber that ratcheted up the rear end of the car every time Jimmie and Kyle hit a bump. But, post race, both cars failed because the rear spoilers were too high. But wait! NASCAR, being the fair-to-all-competitors organization they are (Cough! Cough! Choke! Choke!), allowed the two teams to let their cars sit for about 30-minutes before the cars were checked a second time. Didn’t matter, as the cars failed that second inspection. Oh wait, again! They, NAACAR allowed the two cars to sit for another 30-minutes. By then, those magic shocks cooled and bled off some of the pressure, allowing the cars to return to a passable level. The one comment I remember was from Carl Edwards, who said, “I wished we had of thought about that one!” So NASCAR set the precedent that day in Dover. So what if the spoiler was too high. Give him a $10K fine and call it even. But!!! Brad was driving a Ford, not a Toyota. Expect the fine to be really huge!