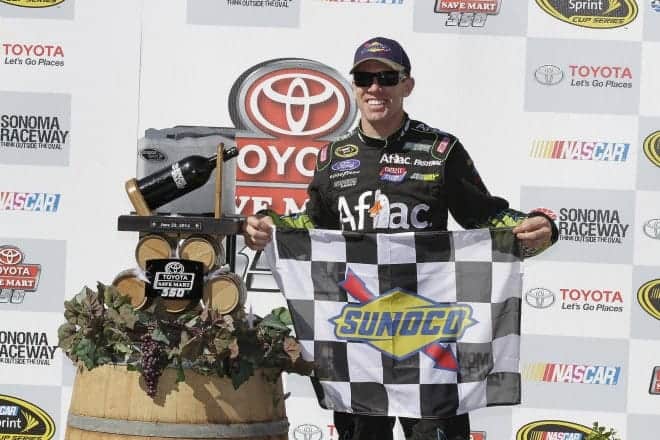 With the announcement that Carl Edwards is headed to Joe Gibbs Racing for the 2015 season to drive their No. 19 Toyotas, its timing may be cause for some reservation. A month ago as rumors ran wild, it looked like a no-brainer; the Roush Fords he had driven for the past decade cars were out to lunch on intermediates, long the bread and butter of Roush Fenway Racing and what Roush Racing had staked its reputation on for nearly 20 years. Then there was a test at Michigan International Speedway a few weeks ago where suddenly the seas parted, and a flood of information was revealed, that instantly picked up performance.

This was evident in race practice this past week at MIS, where after the first session all three RFR Fords were in the top eight, with Carl Edwards eventually qualifying third. Once the race started some of that speed faded, with Greg Biffle the top finishing teammate in 10th. A bit disconcerting seeing how fellow corporate teammate Brad Keselowski finished 8th, despite having walled it at 200mph late in the going, but clearly a step in the right direction and a marked improvement from June, where Biffle was the best of this trio, with a 20th place result. It would appear that this was their first stab at applying what they learned aerodynamically and mechanically suspension wise – perhaps Ford leaned on Penske a bit to open the books and share with their corporate teammate and engine supplier – and they are sure to only improve going forward.

While the motivation to move on for Edwards has been centered around his desire to avoid any “what-if-I-only…”-scenarios while in the retirement home, the lack or performance the past two seasons was clearly cause for concern.

Roush has faced similar stumbles in the past, most notably in 2009-2010 when flawed simulation software had them so far off into the weeds that until Richard Petty Motorsports steered them in the right direction; it seemed as if they may never figure things out. Before that at the turn of the millennium in 2001, their cars were a mess as well, in part to outsourced aero information. During the 2002 and 2003 seasons despite Matt Kenseth’s championship effort, their engines were found to be routinely down on power sometimes as little as 40 horsepower, but sometimes as much as 70 horsepower to the competition, after chassis dyno evaluations of all brands by NASCAR; the latter was remedied by merging engine building efforts with Robert Yates Racing, forming the Roush Yates Engines operation that now supplies all Ford NASCAR efforts including those of Team Penske.

On the heels of this recent discovery of downforce, balance and speed coupled with Chris Buescher breaking through in the Nationwide ranks and breathing new life into the operation, is now truly the time to bail? The JGR cars while in The Chase, have had issue of their own this season – largely in the horsepower department.

“By far, the worst motor ever in the Cup Series….”, lamented Denny Hamlin during the race Sunday afternoon. Following the race, Hamlin suggested he was down about 50 horsepower to Dale Earnhardt, Jr. who he was racing with at the race’s end. It’s been no secret that TRD has been down on power to the competition this season; even the ECR engines that are typically stout had Ryan Newman admitting to Jimmie Johnson following their post-race bickering, “If I had your engine, I wouldn’t have to race that way.” Toyota has had their share of engine woes the past two years.

Last season is was a metallurgical issue in their parts which led to a number of engine failures and a frustrated Kyle Busch in an explanation of the issue saying, “it can’t be fixed.” It was remedied – to a degree – whenever a TRD gives up the ghost, Busch is often one to sarcastically attribute the failure to the supplier, as he did at Pocono last month after an engine failure, “Something between the frame rails doesn’t want to operate correctly right now.”

”For whatever reason, we got off to a bad start this year,” said team owner Joe Gibbs. ”We’re trying to close hard and trying to put ourselves in a good position. We’ve got some good updates coming in the motor, and so hopefully we get hot at the right time. We’ve been behind.”

Such has been a common theme after JGR made the decision to abandon their engine program and outsource their power plants to Toyota Racing Development. Mind you Mark Cronquist was long regarded as one of the top engine builders in the business, and has three championships to his credit at JGR in 2000, 2002, and 2005. TRD has been an engine supplier in the Cup Series since 2008, and has zero. The only team that has managed to win a title using off-the shelf engines has been Tony Stewart in 2011 with Hendrick engines, which have been so stout as of late, even their average engine is better than the next best out there most days.

TRD engines may be lights out in the Truck Series and Nationwide, but when it comes to delivering titles in the Sprint Cup Series – it just hasn’t happened. The closest they came was in 2010, the last full-season they ran their own motors, switching to TRD engines ironically at MIS in August of 2011. Kyle Busch opted to remain with the in-house engines, and won that particular race. TRD engines did win three of the ten Chase races in 2013, but given the continued criticisms of TRD engines and with Edwards coming aboard next season, perhaps now might be the time to look at restarting their own engine program if they want to mimic their prior championship successes of years past.

In the meantime, how Joe Gibbs Racing and the TRD engines finish the season might prove prophetic for Edwards’ results in 2015. While Roush Fenway Racing has a history of riding a roller coaster of performance the past few seasons, the do manage to keep the heart of their machines in-house and within their control.

Either way he’ll continue to get a big paycheck for the foreseeable future. Not much risk there.
You can flip a coin as to which organization, JGR or RFR, will win a championship first.

Yet at a time when so many complain about the cars not able to pass we have seen that 48 pass with relative ease as if he has extra HP under the hood. Do you really think Nascar would ever find something with the 48 or the 88 engines?

Bill B
Reply to  rascalmanny

Or maybe they can just afford to have twice as many engineers working on the new change than any of the other teams.
It shouldn’t be surprising that the organization with the most resources has the best success of integrating new changes into their program and optimizing the results.
Never forget that there are always two races going on. One on the track and the other in the boardroom for sponsorship dollars.

rascalmanny
Reply to  Bill B

This is another reason why all these changes over the last decade benefits Hendrick, because they have the most money. So the other teams are in constant “catch up ” mode.

I still liked your column, though. And I agree Edwards will probably be about as successful at JGR as he has been at RFR.