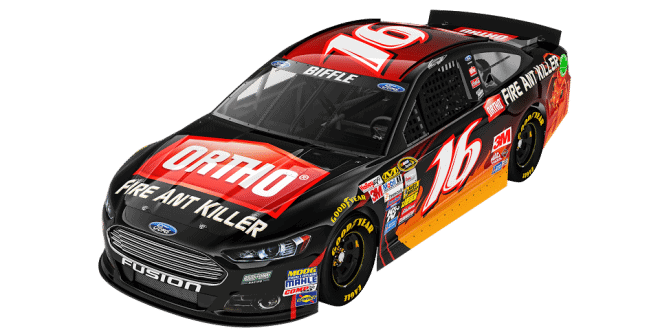 Just a little more than a week removed from Hendrick Motorsports’ announcement that current Greg Biffle sponsor 3M would join the organization to back Jeff Gordon beginning next season, Roush Fenway Racing and Ortho got together at Bristol Motor Speedway Friday morning to announce a multi-year partnership.

“I am thrilled to have Ortho on board,” said Biffle, who is looking to become the first driver to win championships in all three of NASCAR’s major series. “I spend a great deal of time outside and do a lot of work on my home myself, and I understand how important their products can be. They have a great history and it will be an honor to have a brand of their stature and reputation on our No. 16 Ford Fusion moving forward.”

The partnership begins next weekend at Atlanta Motor Speedway, and Ortho will be on Biffle’s No. 16 Ford for two other races this year. RFR president Steve Newmark wouldn’t go into details of the exact number of races the company will serve as primary sponsor next season, but did say it was “roughly half of the races in 2015.”

Thrilled to have Ortho back on board – over the last decade, we've won 12% of the races with Scotts/Ortho on the car! @roushfenway #DR1VEN

Scotts Miracle-Gro, parent company for Ortho, previously partnered with Roush Fenway from 2005 through 2011. Through that partnership across all three of NASCAR’s top series, Scotts and RFR combined to score 12 wins, including six by Mark Martin in the Camping World Truck Series. Additionally, Carl Edwards won the 2007 Nationwide Series championship with Scotts on board.

“We have a great history and have had a lot of success with Roush Fenway Racing.  We’ve been to victory lane a dozen times and had a championship and we’re really excited about our new partnership with the Ortho brand and Greg and the outstanding No. 16 team,” Mike Sutterer, vice president of regional marketing for Ortho said. ” The Ortho brand and the Roush Fenway Racing brand is really a natural fit together.  There are a lot of synergies.

“We both try to be number one every day in everything we do, whether it’s the No. 16 race team working hard at the track every weekend to win, or whether it’s the Ortho brand working hard in fans homes and yards to keep insects away every day.  So we know NASCAR fans are incredibly passionate and loyal to drivers and teams and their business partners and we’re just excited to be part of that.  We know the Ortho brand is already in millions of fans’ homes and we’re looking to keep those fans, but with our partnership with Greg and the No. 16 team, we’re looking to add some new Ortho fans as well in 2015.”