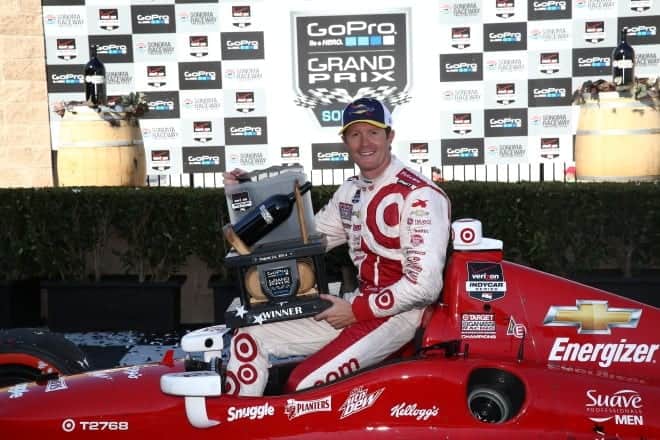 The GoPro Grand Prix of Sonoma started under rather inauspicious circumstances, as a massive earthquake nailed the Napa/Sonoma area around 6 am.  The IndyCar series let it be known that the event would go on as scheduled.  Hence, as the on-track festivities began, with the IndyLights race and the air show, one would never know that Napa was digging itself out of the rubble and looking at the damage that had been done.

But as the adage states: the show must go on.  It started with an incident in Turn 2 as the drivers headed up the hill on lap one of the road course.  Scott Dixon and James Hinchcliffe scuffled, which then collected Sebastien Bourdais and championship contender Helio Castroneves.  Castroneves pitted twice under caution and slipped to the back of the field.

In a nutshell: When Graham Rahal pitted from the lead with 5 laps to go, Scott Dixon raced past Mike Conway and into the lead then held on for the final laps.  Dixon seemed to have one of those where-did-he-come-from kind of days, racing in the top ten for much of the race but not quite seeming to challenge for the lead until late.

With Mike Conway running out of fuel on the last lap Ryan Hunter-Reay and Simon Pagenaud took second and third.  Takuma Sato earned a well-deserved fourth-place finish and it was Juan Pablo Montoya, who closed out the top five.

Key Moment: On lap 30, Carlos Huertas pulled off the course as his car lost spirit, and began losing fluid.  During the caution period, most of the leaders stayed on course.  Mike Conway powered past Tony Kanaan after a caution period and raced away from everyone. The varying pit strategies that began during this middle stint of the race would be what would later move Dixon and Conway into the top spots.

– The gap in points between Power and Castroneves now stands at 51, with Simon Pagenaud 71 behind.  The double points that will be offered next weekend will make the championship storyline compelling as those three drivers will be mixing it up, with Ryan Hunter-Reay also a threat.  It seems IndyCar got what it wanted with the double points finale and a tight race.

– Sebastian Saavedra had one of those forgettable days.  He tangled with Sebastien Bourdais and Castroneves on lap 36, which caused him to fall through the field.  The damage he suffered caused him to pit before it was open, earning him a penalty that put him at the rear of the field.

– Will Power is considered a stellar road-course driver, and for the first half of the race it looked like he would prove that once again.  Then a rash of cautions occurred, and his team’s strategy put him in the eight spot going to green on lap 40.  To compound his issues, he then spun out and dropped to 20th.  The rest of the race was Power’s push to make up spots, which he performed in a steady manner.  The last lap clash, however, between he, Justin Wilson, and Bourdais, seemed a bit reckless and was later put under review.  Power dropped a spot from the original running order of ninth into tenth.

– Castroneves wasn’t so lucky.  He never quite recovered from his opening incident and struggled to an 18th place result.  As much as Power may have faltered at Sonoma, Castroneves did worse and now sits further behind in the points.

– Takuma Sato earned fourth, which for many drivers may not seem all that special, but has to be considered a fantastic result for the A.J. Foyt team.  They have struggled for much of the year and this kind of result, though not a win, has to provide a bit of a boost as they head to Fontana and the end of the season.  With that being noted, oval tracks have never fallen in Sato’s forte.

– The should call him Heartbreak.  Graham Rahal had a strong car all race long, and raced out to a lead in the latter stages.  Then with five laps to go, he had to give it away, when he pitted for fuel.  The team had hoped to stretch the fuel-mileage to the end for a win but couldn’t make the numbers work.  To compound his frustration, Rahal secured himself a pit-road speeding penalty, dropping him further back and into 20th.

– Juan Pablo Montoya started the season slow, but since he’s become more acclimated to open wheel again, he’s been rather good – and what people had hoped for.  His fifth place at Sonoma follows this trend and should be the continuing indicator that he should be one of the contenders for the 2015 championship.

– Best wishes to those in the Napa area who are dealing with the aftermath of the earthquake.

Simon Pagenaud.  He continues to show that he’s meant for the series and is a serious contender.  That he’s doing it with a smaller team, Schmidt Peterson, makes it all the better, when sitting between the Penske and Ganassi powerhouses.  His third place at Sonoma shows a driver who is growing into an important aspect of the series.

The series is in the process of finalizing the 2015 schedule and there are some interesting developments.  To begin, there’ll be no stopping in Houston, which probably comes as a relief to a number of drivers.  Two races that are likely to be added to the schedule is one in Dubai and the other in New Orleans.  The one race which has the most speculation is Toronto.  The Pan Am games are causing problems with scheduling that race.

Scott Dixon on his championship hopes: “I think I’m looking for a meteorite to take out the 12 car.”

Will Power gave a humorous take on his spin on lap 40 saying that he “wanted to give a show for the youngsters.”

Ryan Hunter-Reay, “Second is not what we needed, but still a pretty good day.”

Side note: A quick thanks to Diana and Tamara in PR who helped square things away at Sonoma.

The season-ending race at Auto Club Speedway.  The two-mile oval will cap the season for a third straight year, and will be on August 30th at 6 EST, on NBCSN.