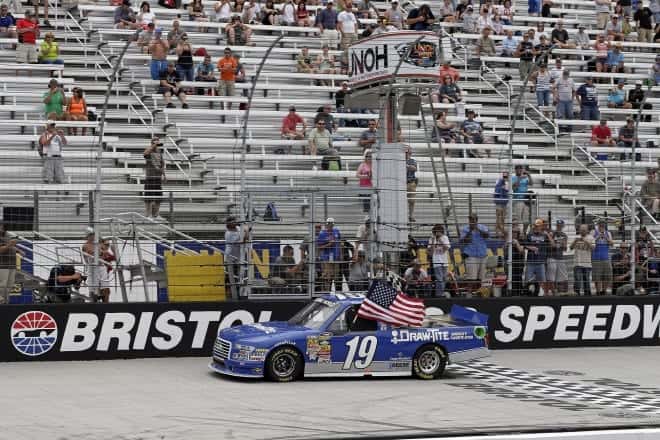 One: Keselowski — Our First Triple Champion?

After 62 races across 10 seasons, Brad Keselowski has finally won his first Camping World Truck Series race. In the process, the 2012 Cup champion, in his own equipment, became just the 25th driver to record a victory in all three of the major NASCAR series. Bristol’s triumph was part of a trifecta sweep for Penske Racing drivers as they flexed their muscle a mere three weeks before the start of the Chase.

But perhaps no victory was more notable than Brad’s. Keselowski’s father, Bob, won a Truck Series race back in 1997 so with Brad also managing a win, they become the first father-son duo to win a race in the series. Emotions were raw in victory lane as the driver remembered how his family went bankrupt trying to bankroll his bid to succeed in NASCAR.

All of that got me thinking because one day, Keselowski might just become the first driver to win a championship in all three series. Of all drivers currently active, both Greg Biffle and Austin Dillon have won Nationwide and Truck series titles while Keselowski has already secured Cup and Nationwide series crowns. In the past, Keselowski has discussed running a full schedule in Trucks once he’s done at the Cup level, and with his own team, running at full song he might just be the driver who finally completes the set of three. It’s a record I’d love to see someone capture and if anyone can, Brad might just be the man.

Over the next couple weeks, we’ll hear a lot of talk about the importance of points as drivers battle to secure the remaining places inside the Chase field. There will be drama aplenty (and hopefully no itchy arms at Richmond International Raceway) with much discussion about who’s in, who’s out and who’s on the proverbial bubble. And given the way this season has unfolded, there may even be a last-minute, last-lap pass at Richmond to secure a coveted spot or even a dramatic race victory by a currently winless driver to grab one. But the simple truth is, I’m not sure it makes much difference if a Kyle Larson or Austin Dillon makes the field, even if it will make good copy and great Tweetable thoughts. The format this season is something of a wild card but it seems unlikely that a driver who hasn’t made a great deal of waves in the standings to this point can go on a ten-race tear and win it all. Could it happen? Certainly. But is it likely? I’d posit no. All season long, we’ve seen the same five or six drivers dominate and I don’t think that will change once the Chase begins. Hendrick Motorsports, along with Penske have been head and shoulders above the field to the point challenging will be difficult.

So whilst it will be fun to watch at Atlanta and Richmond, ultimately I don’t think it will matter at all when it comes time for the big prizes to be handed out. Enjoy the “bubble” talk… but stay realistic.

Three: Can Will “Power” to a first IndyCar crown?

For the third straight year, the Verizon IndyCar Series will finish up the season at two-mile Auto Club Speedway. And judging by what we’ve seen when the open-wheel cars hit the track in Southern California, this Saturday night’s race should be a classic 500-mile battle of speed, passing, and attrition. Team Penske driver Will Power sits atop the standings with a healthy lead of 51 points over teammate Helio Castroneves and 81 markers on third-place driver Simon Pagenaud. However, with double points available and up to a maximum of 104 for the winner, a first championship for the Australian is still far from guaranteed. It was a point Castroneves was keen to stress after the race at Sonoma this past weekend, refusing to surrender. “Anything can happen,” said the Brazilian, “We are not giving up. We will keep on it and give everything we have next weekend.”

For Power, it is a shot at redemption after losing the title in the last race in three straight finales (2010 through 2012) and finishing a disappointing fourth, by his own high standards, in 2013. Castroneves is also seeking a first title, having finished second three times and third twice in the season points standings so we’re all set for a classic battle under the lights at ACS. This one will be worth tuning in to see, that’s for sure.

Four: Expect a JGR bounceback in 2015

It has not been the brightest of seasons for Joe Gibbs Racing in 2014, even with Kyle Busch and Denny Hamlin locked into the Chase and Matt Kenseth, by way of his high points total, also all but in the final Chase field of 16. All year long, the JGR cars have fought a losing horsepower battle against the Hendrick Motorsports juggernaut and the especially racy Penske Fords. As things stand, it would be something of a surprise to see a JGR driver lift the big, silver wavy trophy at Miami-Homestead in mid-November. But it is not all doom and gloom, especially with the announcement that Carl Edwards will be a JGR driver in 2015. Having four teams, along with another established veteran in the fold, will only help in terms of feedback and data. It also serves as a prime opportunity to switch personnel, expansion the perfect excuse to perhaps shake up tired crew chief pairings like a Kyle Busch-Dave Rogers, a marriage which has blown up badly as of late.

So while the short-term progress looks bleak, with no bids inside the Final Four a possibility the longer-term prognosis looks rosier. Expect Edwards to make a quick difference next year and with an extremely strong quartet of proven winners, expect more from JGR, too.

Next up, it’s the penultimate race of NASCAR’s regular season at the venerable Atlanta Motor Speedway. This will be (Sprint) Cup race number 107 at the mile-and-a-half (well, 1.54-mile) quad-oval. It’s a record that extends all the way back to 1960, a debut race won by the legendary Fireball Roberts. 2014 will be the final season Atlanta occupies this spot on the schedule, with reports suggesting that, next year Darlington Raceway will get back its much revered Labor Day weekend race date after five long years without it.

But there’s a downside to restoring tradition. For Atlanta, according to Bruton Smith, it means a move back to March and the chillier weather might really have an impact on attendance at a venue that already struggles to fill up the stands. Whilst I’d applaud the Lady in Black’s return to her traditional position on the schedule, I wonder what this move means longer-term for Atlanta – a track, let’s not forget, that nearly always promotes excellent racing. I can only hope it’s not the beginning of the end for an oval that, in my opinion, should have a permanent position on the NASCAR schedule.