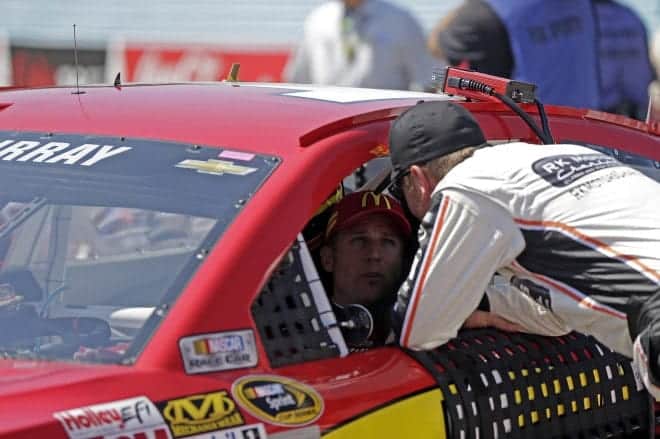 Several drivers that have already won this year saw their race go sour fairly early on during the running of Saturday’s Irwin Tools Night Race at Bristol Motor Speedway.  That left the window open for many, who have not been as fortunate to win a race this season, to capitalize on the opportunity to punch their definite ticket into contention for the last ten races.  One of them was a driver who is no stranger to winning some major races when it counts.  Jamie McMurray has proved time and time again that he can shine on various track configurations when out of the spotlight, and this Tennessee evening was no different.

After drivers like Denny Hamlin, Dale Earnhardt, Jr., and Kevin Harvick had their share of problems, McMurray consistently showed the power of his well-handling car, and, shortly before the crossed flags, made his way to the front for the first of three times out front.  He wasn’t doing it in a standard way either.  The lower line he ran was something that not many other drivers tried and made work.  It was a line that was lower, but not low enough that others had room to pass him using their outside line on most occasions.  Being different is something the veteran driver has used to net such headlining wins as the Daytona 500, Brickyard 400, and the Sprint All-Star Race.

This time, a Chase berth was on the line, but knowing his usual demeanor, McMurray was probably mainly focused on just accomplishing the victory.  Unfortunately, in the closing stages, it faded away as another winless driver and the Penske machines proved to be too much and his hopes and car literally slipped to an eighth-place finish.

That other driver who has surprisingly lacked in the win column this season had another chance at changing that on Saturday night.  With consistent strong runs, Matt Kenseth has all but assured himself a spot at going for the championship starting at Chicagoland, but just when we thought his methodical way of sneaking up toward the front at the end of the race changed to some dominant performances last season, he has in a way returned to his 2003 championship form.  It’s debatable if that is going to work out for them in 2014, but coming up short of a victory certainly has not been a lack of effort.  Kenseth once again showed the way near the end of the 500-lap marathon, but with less than 50 to go, it was Logano who proved to have the faster car.  For the sixth time this year, it was Penske Racing that had the stranglehold on the other 41 cars in the field in the end, and it could easily become a familiar sight in the final ten races.

Additional hungry Ford drivers had the chance to show what they had as a potential indication for late in the year.  Greg Biffle teeters on the edge of contention and has publicly spoken about how he feels that his team needs to win in order to be in the Chase.  Once again, that effort came up short, despite a top-10 run most of the evening on a weekend where Ford swept, a feat that doesn’t appear to have ever occurred across all three series without a Roush driver being involved until now.  Marcos Ambrose brought in momentum after a second place at Watkins Glen, a 12th at Michigan and a strong run in the spring Bristol race, but it never came together for the Richard Petty Motorsports team. Ambrose’s night ended on a low note with an accident toward the closing stages.

Whether we like it or not, winning has taken on a new meaning in the Cup Series.  It is actually a little ironic that a driver such as McMurray, who somewhat impacted the first change to allow winners outside the top 10 in points to advance to the ten race playoff and now an even more crucial system, cannot seem to succeed in that respect.  For a team like McMurray’s, you never know when you can expect them to be in the hunt once again, but there’s always a chance that we may be talking about the same thing with a more favorable result come Atlanta or Richmond.  Teams without a winner sticker are going to be rolling the dice more than ever in these next two events.