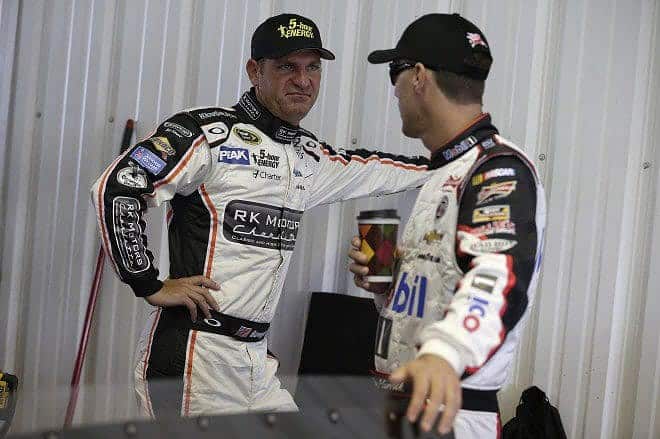 Multiple teams descended on Chicagoland Speedway for the first of a two-day test on Monday at the 1.5-mile oval that opens the Chase in just a couple short weeks. According to a report from MRN, Stewart-Haas Racing, Roush Fenway Racing, Michael Waltrip Racing, Richard Petty Motorsports and Chip Ganassi Racing were all represented. SHR said the No. 14 team and Stewart were not present for the test.

Penske Racing and Joe Gibbs Racing have opted to save their four test sessions allowed by NASCAR for a little later in the season. Both organizations, along with JTG Daugherty will test at Charlotte Motor Speedway next week. Meanwhile, Hendrick Motorsports is scheduled to test at Martinsville Speedway Tuesday and Wednesday.

Early in the afternoon, a strong thunderstorm rolled into the area, temporarily putting the test on hold.

Kevin Harvick captured a spectacular lightning picture from the safety of the garage area and posted multiple videos of a power outage, very heavy rain and thunder.

Once the rains stopped, the garage area had several inches of water present.

Teams were able to get back on track later in the afternoon before another rain storm ended the afternoon, and Clint Bowyer’s No. 15 team had a rough afternoon.

Assuming the weather cooperates, everyone will head back to the track for a second day on Tuesday. The current forecast calls for morning scattered thunderstorms and a cloudy afternoon.

According to MRN, the following test dates have been confirmed:

Content Director Beth heads up management of our 30-person staff, acting as Tom’s main assistant with technology and personnel while working as Frontstretch’s Truck Series expert. The author of Truckin’ Thursdays and the coordinator of the site’s pre and post-race coverage, she also runs a periodic charity column that spotlights when NASCAR gives back. A childhood transplant to Texas, Beth is a 15-year writing veteran who has contributed content to BRANDT and Athlon Sports, among other outlets.
@NASCARBeth
Previous Who’s Hot and Who’s Not in NASCAR: Bristol – Atlanta Edition
Next Voices from the Cheap Seats: At Bristol, The More Things Change…