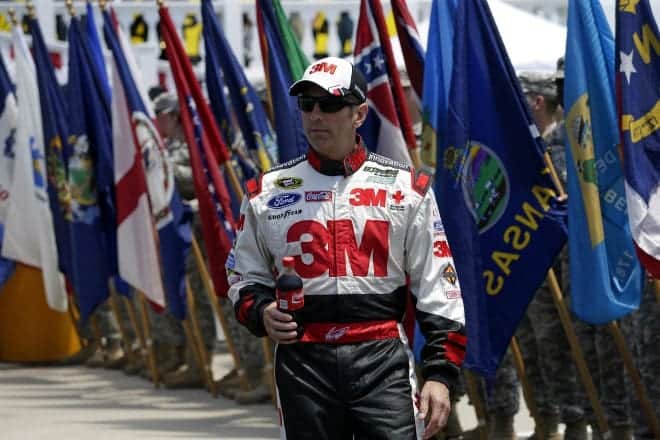 Bristol Motor Speedway has been the measure for mental and emotional toughness in the NASCAR Sprint Cup Series throughout much of the modern era. It certainly played the part during the IRWIN Tools Night Race as some potential Chasers lost their cool – and with it, their footing in the standings.

On the flip side, another driver joined the ranks of Sprint Cup’s elite and stands primed for a championship run. Will this “toasty” competitor realize his true potential or is this sizzling summer stretch limited to the Dog Days of August?

We’ll soon find out, as the ten-race playoff is officially less than a month away. But first, the series travels to Atlanta Motor Speedway, the site of its penultimate regular-season event before some guaranteed fireworks at the Richmond finale. Round 25 presents an excellent opportunity for those still winless who possess the skills needed to tame the famed 1.5-mile oval.

This edition of Who’s Hot and Who’s Not decodes the bubble picture, highlighting those who have the most to gain at AMS while lamenting rivals who will likely be left treading water, losing ground at a time when there’s no margin for error.

On a night when other drivers were introduced to the sounds of country music, hip hop, and rock and roll Joey Logano walked out to the sounds of Medieval Times. O Fortuna, a Latin Goliardic poem converted into music in 1935 by German composer Carl Orff, rang out as the Penske Racing driver took to the Bristol stage, a unique choice for a driver most have claimed will one day be unique to his generation. Logano then proceeded to show us why, putting together a classic effort on the importance of staying clean in NASCAR’s version of the bullring.

Later that night, while Logano partook in his second act, complete with start/finish line donuts the fruits of his patience became evident. The No. 22 Ford still looked brand new – minus two celebratory flats – on its way to Victory Lane. Its driver was on cloud nine, acknowledging the importance of capturing what he called one of the sport’s “biggest races” in both perception and prestige.

It also boost him up the ladder, from simple Chase participant to talked-up championship contender. With three victories, the total puts him on par with Hendrick Motorsports’ three-pronged attack and Penske teammate Brad Keselowski, who narrowly finished second. Logano, who now has five straight top-6 results since Sprint Cup’s final off week has led 202 laps in those events while streaking up from ninth to fourth in points.

In the what-have-you-done-for-me-lately world of Hot or Not, Greg Biffle stands just behind Logano despite lacking a near-automatic Chase bid. His means of survival on the playoff bubble has been steady consistency – a highly sought-after brand of week-to-week execution that’s providing the difference lately. It’s something that hasn’t been an issue for Roush Fenway Racing this season, despite a company-wide lack of speed. Biffle is averaging a 10.17-place finish since leaving Daytona (the third-best mark in the series) and rides four consecutive top 10s into Atlanta, where he’ll look to defend a growing cutoff margin (currently 26 points over Kyle Larson). Bristol’s 10th-place performance, this weekend also included a little luck: the caution rang out just after the black flag was waved for contact that left the No. 16’s rear bumper hanging by a thread.

Of course, a victory from another winless driver further back in the standings would cut the rope of Biffle’s steady climb upward. That would indeed be the case if someone like Jamie McMurray were the recipient of Atlanta’s WINNER decal.

McMurray has been on the verge of mathematical elimination for weeks now. While it remains very likely that he’ll be wiped from “wild card” consideration with anything less than a party in the winner’s circle, a few factors help to improve his outlook in gaining a playoff berth the other way.

Like Biffle, McMurray is one of the hottest drivers in the series right now, amassing the sixth-best average finish (13.17) over the same time frame as his rival. He also led a career-high, as well as a race-high 148 laps at Bristol. However, that success is only part of the reason why McMurray is capable of something greater than his eighth in Thunder Valley.

If there was one driver with a reputation for surprising people with an unforeseen win, it’s McMurray, who tends to collect them in stock car racing’s biggest events (see: Daytona 500, Brickyard 400, Talladega). With only two regular-season dates remaining, the stakes are higher than ever, and at some point this full-timer’s 0-for-10 Chase streak is going to get snapped.

Atlanta is the perfect storm for another winless driver, Martin Truex, Jr., whose personal accomplishments coupled with organizational prowess could create something special. Truex is tops at AMS since 2012 with a 3.5 average finish, while Furniture Row Racing enjoyed a fourth and 14th at the hands of Kurt Busch and Regan Smith over that span. With the No. 78 driver mathematically eliminated, on points winning is his only option going forward.

Looking for someone a little more likely to take the checkered flag? Try Matt Kenseth, who is almost always strong on intermediate tracks, and seems willing to take the necessary risk in order to lock himself into the Chase (as illustrated at Bristol by his ignorance of crew chief Jason Ratcliff, followed by some aggressive actions taken toward Logano while fighting for first place). Kenseth may not be happy with the speed inside his No. 20 Toyota – yet – but a third at Bristol, virtually locking him in the field on points is a step in the right direction.

Kasey Kahne‘s team also took strides to put their driver in the Chase at Bristol, opting not to stop midway through the 500-lap race. The risk gave Kahne the lead, before a loose wheel forced an off-sequence green flag stop. Those tire problems later compounded, leading to a 35th that dropped Kahne to 13th in the standings.

The night was a microcosm of Kahne’s 2014 gone wrong. Right when things were trending in the right direction, Kahne’s form dropped back to where it has been for too much of the year: behind the curve in comparison to the rest of HMS. Now 33 points behind Biffle’s “bubble” spot, with two races remaining missing the postseason has become a real possibility.

He’ll have to do something out of character in Atlanta to make the Chase, where disappointment has become the norm since 2010. The two-time AMS winner, once NASCAR’s intermediate king has no finish better than 23rd over his last four starts at the track.

Marcos Ambrose entered Bristol as a marquee darkhorse pick, but a broken track bar mount quickly derailed his chances. Ambrose’s record at Bristol made it seem that perhaps he could break into the Chase, even with Sonoma and Watkins Glen in the past. But after a 34th, never in contention Ambrose’s best shots are now gone. Between Atlanta and Richmond, he has combined for three top 10s in 19 career starts, a rough record that shows little sign of changing. Does that mean a permanent “vacation” to Australia is coming soon?

Danica Patrick has made strides toward improvement in her second full-time Cup campaign. Her ability to stay competitive at mid-sized tracks has continued to develop, and is a reason behind her improved average start (21.8) and finish (24.8) numbers.

Unfortunately, her involvement in a high amount of accidents hasn’t changed. Patrick battled handling issues throughout the night in Bristol before losing control of her No. 10 Chevrolet on lap 263. Alex Bowman may have been the trigger, causing the rookie to apologize once the night was over but a faster car might have kept Patrick out of harm’s way in the first place.

Since Mother Nature provided the assist that allowed him a first ever NSCS win at Daytona, Aric Almirola has been far from a contender. In the months to follow, Almirola has no result better than 18th, while a 41st in Bristol marked a new low.

It could have gone so much better. Almirola quickly ascended into the top 20 Saturday night, pushing forward from 42nd before Brian Vickers lost control and slammed into the No. 43 Ford. Almirola was unable to move his machine from its resting place and withdrew from the action for the third time in eight events.

Next, AMS presents its own challenges. Almirola’s 20th last season is his best finish in three starts there. Mid-pack numbers like those show why, at the moment, he is nothing more than a probable first-round elimination once the Chase commences.

Kyle Busch has become the definition of a cold-category regular over the last month. It’s become so bad that there are borderline start-and-park drivers who better Busch’s points output (20) over the last four races.

The speed of Busch’s No. 18 Toyota was severely limited after his own involvement the the chain reaction that collected Almirola and then, frustrations finally overflowed. According to Motor Racing Network‘s Dustin Long, Busch’s comments regarding his Camry’s health left crew chief Dave Rogers with some choice words for his driver.

A possible divide within the No. 18 camp only worsens what has been a down year for Busch. Without chemistry between Busch and Rogers, its hard to see them achieving very much over the final 10 races. Busch’s four-race slump, with finishes of 36th or worse has dropped him from 6th to 17th in Sprint Cup points.