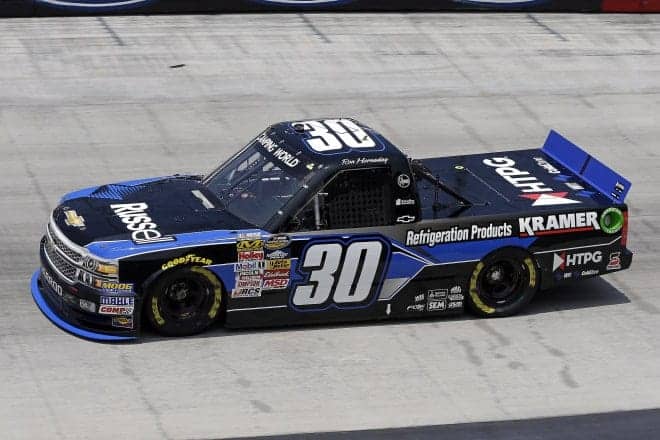 As the team has not officially commented on the news, the situation is still quite fluid.  SiriusXM NASCAR Radio’s Dave Moody stated on Sirius Speedway that he had contacted all parties involved in order to get an idea of the situation.  He had only received a brief text message reply from team co-owner Harry Scott, Jr.  Scott briefly replied that the news is not true.  On his Godfather Motorsports site, Moody described the issue as an ownership dispute between Steve Turner and Scott.

Moody’s sources indicate that the No. 31 team for Ben Kennedy would likely continue to run despite the power struggle, but that the other two teams may be parked either temporarily or permanently.

Turner Scott Motorsports is expected to release an official statement either later tonight, or tomorrow with some more details.  Just last week, the team announced that K&N Pro Series East regular Cameron Hayley would be making his Camping World Truck Series debut this weekend in the No. 32 Chevrolet with his own personal sponsorship from Cabinets by Hayley.  If the news is 100 percent true, it would knock the entry list for Sunday’s 250 kilometer road race down to just 26 trucks.  Also, Turner Scott Motorsports would be down from nine full-time race teams in three different series to six full-time teams in two series.

UPDATE: At 6:10 PM, Turner Scott Motorsports co-owner Harry Scott, Jr. released an official statement on the current situation surrounding the race team.  Scott acknowledges a dispute between himself and Steve Turner, but does not go into any specifics.

Scott’s statement does indicate that both of the organization’s Nationwide Series teams will travel to Atlanta as scheduled for Saturday night’s Great Clips 300.  As far as the Camping World Truck Series teams are concerned, Scott states that both the No. 31 for Ben Kennedy and the No. 32 for Cameron Hayley will make the trip to Ontario as scheduled.  The No. 30 team of Ron Hornaday, which is currently third in points, was not mentioned.

Scott tried to put everyone at ease in his statement.

“My investment company, a co-owner in [Turner Scott Motorsports], will continue to do all it can to keep the team moving forward with or without our business partner Steve Turner,” Scott wrote.  “To all [Turner Scott Motorsports] employees, sponsors, partners and fans, I pledge we will continue to do what we can to keep the teams racing hard each and every week of the season.”

Scott’s statement was released via Ramsey Poston’s Tuckahoe Strategies, independent of Turner Scott Motorsports.  Tuckahoe Strategies’ most recent NASCAR involvement was via Swan Racing.  The company provided public relations to the small team prior to their reorganization earlier this season.