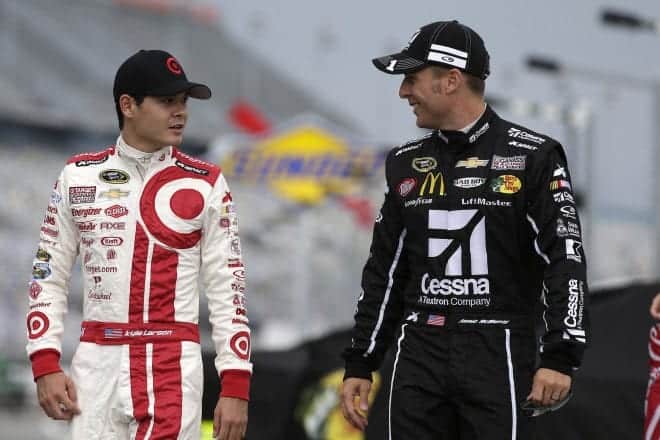 You’re well aware by now of the talk surrounding the Chase for the Sprint Cup – and, most particularly, the drivers who will make it into NASCAR’s version of a playoff system. Who’s in? Who’s out? Who’s out but could make their way in?

Hold on. Is there really any reason to ask that last question?

The lead-up to the Chase provides fans of “bubble” drivers with a will-they, won’t-they sense of urgency, huddling at their TV sets and behind computers wondering if their favorite will make the final cut. Through all iterations of the playoff system, no matter the rules or qualifications to gain entry, that sense of nervousness from being on the cusp has remained.

Then, suddenly, their driver races his car into the Chase, be it after race 25 or 26. Whew. Sigh of relief. Now it’s time to look toward the title.

It’s worth noting that since the Chase started, a driver who was not in a Chase position at some point in between Bristol (race 24) and Richmond has only wiggled their way in 10 times. In some years – four, to be exact – the genetic makeup of Chase drivers has remained exactly the same.

In the other six years, anywhere between one and three drivers that weren’t in a Chase spot at some point over the final two races of the regular season have grabbed one. It certainly makes for a great story at the time, seeing someone overcome odds or adversity to steal a spot at the last or next-to-last possible moment. Perhaps, one could argue, it provides those drivers with momentum once the Chase actually begins.

Does it actually? …Ehhh?

Let’s put it this way: don’t expect that driver of yours who snatches a last-second Chase bid to win the title. Or finish second. Or third. In fact, throughout 10 seasons of the Chase, the average finish for a driver who makes the Chase sometime in the last two races is 8.4. That’s right: barely even top 10.

It’s a fairly telling statistic, especially considering that the points are often reset in a way that can actually benefit certain “bubble” drivers, provided they have whatever the series is looking for that year (see: wins, usually). Even if they don’t, they’re still within shouting distance of the leader entering race 27, so it’s not like barely slotting in and getting the lowest Chase seed gets you a pat on the back and a “better luck next year.” These drivers are there, often times coming in hot from their charge up the ladder last-minute. They just can’t seal the deal, flexing the inconsistency that left them on the “bubble” in the first place through Bristol.

And that’s after such high hopes to start. In 2004, Mark Martin and Jeremy Mayfield exited Bristol outside the Chase but ended up there by the time Richmond was done. Mayfield may have been underwhelming in the playoffs, finishing dead last (10th), but Martin managed to charge right up to fourth. Yeah, he was still 107 points out of the lead by season’s end, nowhere near title contention under the old system but fourth is still the top half of the field. It’s a performance that provided a baseline, encouragement for future drivers who could sneak their way in.

Or not. Since then, the trend’s been all downhill. The best Chase finish for these “sneak-ins” since Martin is sixth, accomplished twice – by Ryan Newman the next year and then Jeff Gordon in 2013. Those are respectable efforts – and in the case of Gordon, top half – but still nothing that causes one to consider each driver as a true title contender that year.

More recently, the 8.4 average has been dragged down to its current resting point. Aside from Gordon, every such “bubble” driver clawing into the Chase since 2006 has finished 10th or worse. Check each out their individual results below.

* – Gordon was out of the Chase, then “in” based on Brian France’s declaration post-Richmond, so he’s a special case as the No. 24 car was “in” throughout the final few regular season races until a poor performance in the season finale dropped them “out.”

What does that mean for 2014? Possibly nothing. Every driver that’s currently “locked in” to the postseason field or is “in the Chase as of now” could exit Richmond in the same position – it’s happened multiple times in the format’s history, after all.

But even if one of the outside-looking-in types surprise us this weekend at Atlanta, or even capture the checkers next week at Richmond, don’t expect them to ride the momentum of making the Chase to greener pastures.

Sorry Kyle Larson, Austin Dillon, Kasey Kahne, and Jamie McMurray. Keep trying to make the Chase, because sponsors love that, but manage your expectations a little once you get there.

Trying to re-write history Kevin?
An asterisk is in order for Jeff Gordon in 2013 chase qualification but your explanation is BS. He was running well in the final race (Richmond) and was in the chase until Bowyer’s deliberate spin out to bring out the caution. Better go look at the running order before that spin and you’ll realize that your summary isn’t exactly accurate.

Nice insight but with the new “musical chairs” format of the chase it remains to be seen if things end up differently or about the same this year.

OK, tell me if these observations are wrong. Fans mention the Chase only to complain about it. Fans have, since its inception not viewed the Chase as a legitimate championship format. Fans are not sitting on the edge of their seats wondering if their driver, or any driver will make the Chase or not. Finally in an informal poll one out of every one JohnQ found the Chase to be over covered and of little interest.