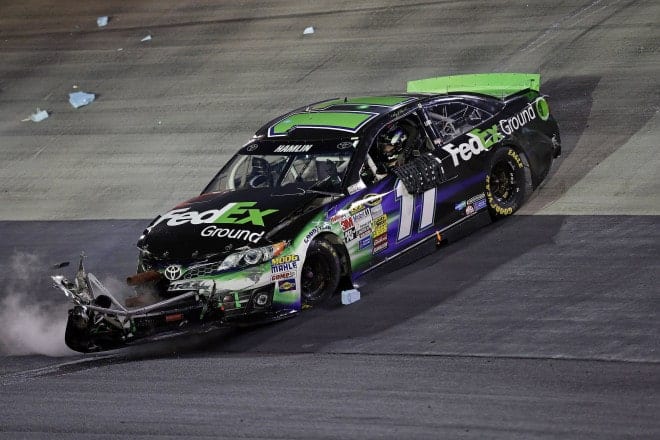 The schedule came out this past week and it gave everyone who follows NASCAR something to gripe about.  In truth, all the criticisms are valid because NASCAR, due to the way the business is run, is unable to make serious changes that would make people feel happy, though that can be a moving target.

The one big positive is that the Darlington race, has once again moved back to its fabled spot on the calendar: Labor Day weekend.  In discussing this move, both ESPN’s Ryan McGee and Frontstretch’s Tom Bowles make comments about how the fans need to show up and how maybe to younger fans, the move isn’t such a big deal.

Really, however, neither one addresses the fact that since Darlington got its raceday back from California, attendance has not been a problem.  The track had made the Mother’s Day gig their own.  When this year’s schedule was published and it showed Darlington moving from this spot, it seemed like an attempt to once again flush the track away – yet the fans stayed true and again filled the place rather well considering the spotty weather in South Carolina in April.

So the move to Labor Day isn’t such a big one as much as it seems; rather, it comes across as a PR ploy and a way for the governing body to say, hey, look, we listened to our fans, and we’re going back to our roots by putting Darlington in its traditional place.

Is it enough?  Probably not.  That so many tracks get two dates on the calendar is part of the problem and removes some of the appeal of the event being unique; though maybe that was never really part of the appeal.

If the Cup Series ever ditched the Chase, that might be something, but the numbers surrounding that aspect of competition have never been vetted and it’s difficult to determine what they might portend.

The schedule is out, and we all know what we’ve got for next year, but maybe 2015 will bring something different. Maybe a Dover race will be cut, or a real shakeup will happen – or maybe, just maybe, a road course makes its way into the Chase.  Those would all show that NASCAR is listening.

Happiness Is…Hamlin. Though Denny Hamlin won at Talladega in the spring, he’s had a rather forgettable season.  For the quality of finishes to which he’s accustomed, it might better be described as miserable (and one might wonder how much frustration he has brewing inside as his old teammate and non-friend Joey Logano continues to succeed).

The fact that he threw his HANS device at Kevin Harvick is not a surprise, but it did skate the line of the new rule that is supposed to keep drivers in their cars after wrecks while also eliminating any chance of confrontation between driver and machine.  Hence, the new rule was meant to stop exactly what Hamlin did.  Or was it?

The truth is, NASCAR loves this stuff.  These antics are the very thing that get spots on the mothership’s Sportscenter, or get tweets and hashtags and all that fun stuff.  The sport blew into the national wavelength with the 1979 Daytona 500 and the fisiticuffs between Cale Yarborough and the Allison Brothers.  Robby Gordon’s helmet throwing incident still resonates, as well as Tony Stewart’s two-handed helmet fastball at Matt Kenseth.  Never mind that even Jeff Gordon has had a moment, like when he charged Jeff Burton at Texas.

NASCAR didn’t penalize Hamlin because it still needs its drivers to show that kind of passion, and still wants the drama.  It’s marketable and fun.  It should be noted, however, that at a track over a mile in length, this idea might incur NASCAR’s wrath.  Good for Hamlin for testing the boundaries.

Happiness Is…Smoke.  Tony Stewart will return to his No. 14 ride this weekend – finally.  The media storm that will come down on him will likely be large and heavy and one thing to watch will be any press conferences or interviews; but don’t expect much.  He’s still not in a position to be loquacious about the incident.  That’s fine.  Let’s hope his racing does the talking and he returns to the form for which he is known.

Happiness Is…A Full Weekend.  Saturday and Sunday are packed with racing.  Saturday hosts both the Nationwide race as well as the season finale for IndyCar.  Then Sunday features the Truck Series going left and right followed by the Atlanta Cup series race – where anxious drivers might make things interesting.  Not too bad a way to unofficially end summer.

Happiness Is…Schedule.  Rockingham, done.  North Wilkesboro, mothballed.  Atlanta, heading to the scrap heap.  When Atlanta leaves the schedule in a couple years, the Cup Series will have done a good job of moving away from its early roots, leaving only Bristol, Charlotte, Talladega, Martinsville, arguably Richmond, and Daytona as tracks in Dixie.  (Homestead doesn’t quite count; and really, Florida joined the Confederacy more out of peer pressure than to fight the war).  Texas is its own country and should not be considered.  That seems strange that so few tracks will now be in the region.

What makes it more peculiar is that IndyCar is actually moving INTO the area.  This week the series announced it will race in New Orleans next year.  Sure, IndyCar will be racing on a road course, but that they feel there is a market to be tapped in the Southeast while the Cup Series continues to eye markets outside the region is interesting.  There are a number of questions that can asked from this situation, but for now, it’s best just to let it play out.

Hamlin has had a miserable season, Talladega..meh..a crapshoot win, and his was it. We were laughing, saying Nascar will deem Tony the winner this weekend “and it will be”.

kb is right about one thing – it shouldnt surprise anyone if Stewart wins this weekend.

Justified or not that always present whiff of corruption has hurt fan interest as much as any of the countless mistakes NASCAR makes.

Can you imagine one of the bat and ball sports, NFL, MLB, or even the NBA, changing the rules for the playoffs in an obvious money ploy? Nope, I couldn’t either, no wonder they look down their nose at Nascar fans.

Nascar is a complete joke. Allowing Stewart to be exempted from the Chase rules is beyond ridiculous. Don’t care about Nascrap anymore.