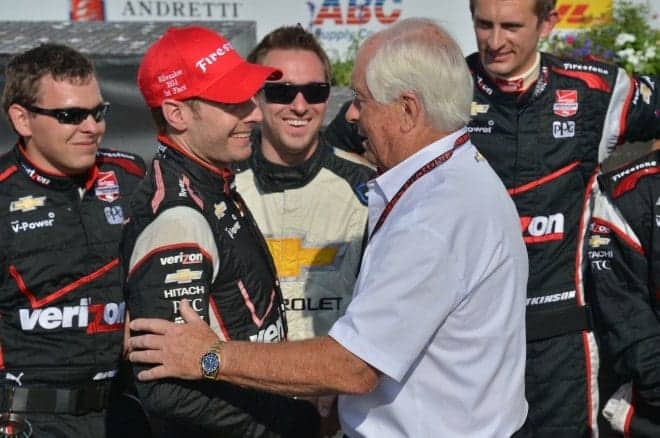 What else? This is it, the end of the season, so it’s time to decide the championship! The Verizon IndyCar Series seems to have a knack for making it come down to the final race of the season as this is the ninth year in a row that’s been the case. As our Huston Ladner pointed out the other day, both of the top contenders, points leader Will Power and second place Helio Castroneves, both driving for the venerable Team Penske, have a big “0” in the championship column, and so does third place driver Simon Pagenaud, the only other driver with a realistic shot at it (the final two drivers mathematically in it will be out of it as soon as the race starts), so that means no matter what happens, the series will crown a first time champion this year.

It’s an interesting dynamic that the two talented drivers from Team Penske, one of the winningest organizations in the history of the sport, have come up short so many times. This is the sixth year in a row that one of them is competing for the championship, the difference this year is that long time rivals Target Chip Ganassi Racing and Andretti Autosport are out of the picture. Instead, it’s Schmidt Peterson Hamilton Motorsports looking to capitalize should the Penske pilots falter.

It’s Auto Club Speedway in Fontana, California, a 2-mile D-shaped oval, for a 500 mile run to the Astor Cup. That’s 250 laps for the distance. To make things interesting, Will Power is your defending race pole sitter and winner. Ovals are his weakness no more. This one is a Saturday night showdown, with coverage on NBC Sports Network starting at 9:00 p.m. Eastern Time. Radio coverage can be on your local IMS Radio Network affiliate or on XM 209/Sirius 213.

As noted, Will Power enters the season finale as your points leader, up by 51 over teammate Helio Castroneves. Simon Pagenaud is the dark horse, still in the running, 81 points behind Power. Sounds like a lot, but don’t forget that there are double points on the line in this one, so it’s not an impossible task for Pagenaud to pull the upset. Ryan Hunter-Reay and Scott Dixon are spectators in fourth and fifth.

This one is all over. Chevrolet has scored 2393 points to Honda’s 1532 going in to Fontana. Chevrolet also has 11 wins on the season to Honda’s six.

All eyes will be focused on the three championship contenders, but this is an oval, and it’s one that Ed Carpenter has always done well on, winning this very race in 2012. There are, after all, two trophies being awarded on Saturday night, and he’s a strong possibility to play spoiler to the hopes of the title runners to take home both of them. Carpenter was third fastest in Wednesday’s Open Test at the track as well, behind a few others looking to end the season on a positive, Scott Dixon and Juan Pablo Montoya, who’d love to get a share of the spotlight his teammates are currently enjoying.

The full 2015 Verizon IndyCar Series schedule will be released during the off-season, but bits and pieces are already being revealed. INDYCAR announced this week that they are adding the Grand Prix of Louisiana at NOLA Motorsports Park over the weekend of April 10-12. As discussed when the possibility of the event was raised earlier this season, the race will be part of a three day festival that will also feature live music, entertainment and food designed to showcase Louisiana culture. NOLA Motorsports Park is a newly-configured 13-turn, 2.67 mile permanent road course. The course layout was developed with input from IndyCar Series drivers, including James Hinchcliffe and Graham Rahal.

Matt Stallknecht is going with Ryan Hunter-Reay which would see the Andretti Autosport team close out the year with some momentum. Huston Ladner, who will be at the track for Frontstretch this Saturday night, thinks that it will be Scott Dixon, closing out an off year on a strong note, as Will Power did last year. I’m going with the oval specialist, Ed Carpenter, who would also like to close the best year his team has had on an upward trajectory.

That’s all folks! This is the final race of the 2014 Verizon IndyCar Series season. Nothing to do after this one but pop the champagne and toast the champion. Stay tuned for upcoming news about the full season schedule to find out where and when the 2015 season gets underway!