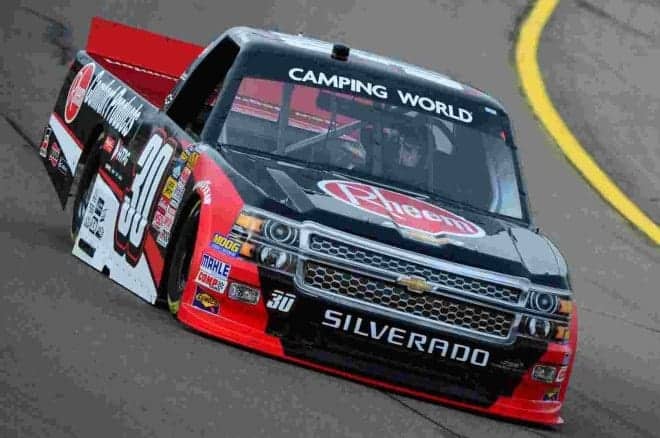 Word came down late Friday afternoon that the Turner Scott Motorsports Truck Series team of Ron Hornaday, Jr. would not be competing this weekend at Canadian Tire Motorsports Park in Bowmanville, Ontario. The four-time champion is currently fourth in series points heading into this weekend’s race, but that didn’t stop the doors from shuttering. While the team trucks of Ben Kennedy and Cameron Hayley will still be in the event, the most competitive driver amongst the trio earned a pink slip. Oh yeah, did I mention he’s the winningest driver in the series’ history, with 51 wins and four championships to his credit?

After some erroneous early reports had the entire operation shutting its doors, team owner Harry Scott released a statement claiming, “Turner Scott Motorsports remains in operation and will compete in this weekend’s NASCAR events. TSM’s NASCAR Nationwide Series race teams represented by the No. 42 driven by Kyle Larson and the No. 31 driven by Dylan Kwasniewski will complete this weekend as scheduled at Atlanta Motor Speedway. The No. 31 driven by Ben Kennedy and the No. 32 driven by Cameron Hayley in the NASCAR Camping World Truck Series will compete as scheduled at Canadian Tire Motorsport Park this coming Sunday. My investment company, a co-owner of TSM, will continue to do all that it can to keep the team moving forward with or without our business partner Steve Turner. To all TSM employees, sponsors, partners and fans I pledge we will continue to do what we can to keep the teams racing hard each and every week of the season.”

Unfortunately, that investment company could invest in just so many people; several mechanics are out on the street, this Thursday along with Hornaday. While it is a huge blow to both the company who had amassed 11 wins in the series as well as the 2012 Championship with James Buescher, it is further commentary on the state of affairs for a series that continues to struggle to fill fields and lose trucks due to lack of sponsorship – or in this case, a reported dispute between owners Steve Turner and Harry Scott. There were only 29 trucks on the entry list for this weekend’s race; now, it’s down to 28 with Hornaday’s team not making the trip. Only 29 trucks showed up two weeks ago at Michigan, looking more like an entry list from 1995, the first year of the series’ inception than 2014.

Those totals prove even more discouraging considering this weekend’s race is the follow-up to last year’s wildly entertaining one that saw a last turn dust-up between Chase Elliott and Ty Dillon, as well as the antics between Max Papis, Mike Skeen, and Skeen’s girlfriend that was the talk of the track for the next several weeks. If that type of event can’t gain traction, in the form of greater entertainment and interest the Truck Series is really in trouble.

The 2015 NASCAR Sprint Cup Schedule was released on Tuesday with many positive moves made. The Series will follow up the Daytona 500 in Atlanta, instead of trucking across the country to Phoenix, and the Southern 500 will return to its rightful place on Labor Day weekend. There are a few misses, however, most notably the absence of a road course in The Chase (this time around…) and the July race at Daytona being run on Sunday night. A quick glance at the calendar shows that next year, July 4th falls on a Saturday night, so that makes sense not running it in the evening when everybody will be craning their necks ooh-ing and ahh-ing at the sky. That said, if there’s anything this year proved following the rain-delayed event, it was that this race needs to be ran as it always had been in years past, before noon. The race could be run on Saturday morning at 11:00 a.m. or even Sunday at 11:00 a.m. to help provide some room for a rain delay. A precious few extra hours’ travel time might also save a vacation day or two for fans traveling from out of state.

Meanwhile, the Chase races all remain the same…in the same order…again. Yawn. As we’ve seen in recent years, NASCAR is willing to make some changes but there won’t be a complete shuffling of the season, tracks or races overnight. There are sponsorship and marketing plans in place that need to be honored, along with that little caveat of ISC and/or the France family owning virtually every track on the circuit. But these few changes will help matters, coupled with the recent test session at MIS that proved low downforce, sticky tires that wear out, and leaving the throttle to those who dare will provide the best racing at the intermediate tracks which once were the backbone of the series. Small steps…

With two races to go before The Chase gets underway, Kyle Busch had another frustrating outing at Bristol Motor Speedway this past Saturday night. While the team did finish second in three of four races, between Kentucky and Indianapolis, the last four events have been abysmal by even start-and-park standards: 42nd, 40th, 39th, 36th. (On the bright side, hey, they’re steadily getting better right?) The friction this season between crew chief Dave Rogers and Kyle Busch is becoming more evident, with the head wrench becoming more willing to give it back to his driver this year. From the back and forth bickering at Pocono to this weekend’s home run zinger of “park it behind the truck and take your whiny little ass to the bus!” one has to wonder what the driver and crew chief lineup will look like at JGR next season with Carl Edwards coming on board.

While Busch is locked into The Chase already courtesy of an early-season win at Fontana (by way of late-race restart) he’d be battling for his Chase chances right now if he wasn’t. Busch is currently 17th in points with just nine top-10 finishes this year, part of an overall disappointing season at Joe Gibbs Racing. Busch and Rogers have been together since 2010, and after five seasons, might it be time for a change? While the incident was written off as a miscommunication between driver and crew chief, in part because it’s so loud at Bristol, JGR can only be hard of hearing for so long.

I just get the impression that this duo has gone about as far as they’re going to get and one of them is tired of the tantrums and baggage that comes with the other. Fearless prediction: Rogers will be atop Edwards’ pit box in 2015.

Vito is one of the longest-tenured writers at Frontstretch, joining the staff in 2007. With his column Voice of Vito (monthly, Fridays) he’s a contributor to several other outlets, including Athlon Sports and Popular Speed in addition to making radio appearances. He forever has a soft-spot in his heart for old Mopars and presumably oil-soaked cardboard in his garage.
Previous NASCAR Tech Talk: Matt Puccia “Labors” Through Atlanta And Life On The Bubble
Next Fantasy Insider: Gauging NASCAR “Bubble” Brilliance At Atlanta