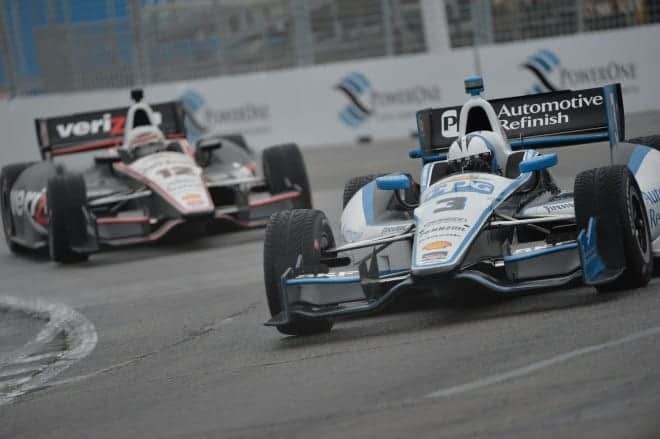 The qualifying session for the IndyCar series race at Auto Club Speedway took place in the heavy heat in the middle of the day in Fontana, California.  Helio Castroneves, going out last, earned the pole position with an average of 218.640 mph.  The track temperature during the session hovered around 136 degrees.

Qualifying was based on the average of a two-lap run.

Juan Pablo Montoya went out early and laid down an average of 217.621 and then held on as oval stalwarts Ed Carpenter, Tony Kanaan, Ryan Hunter-Reay and Scott Dixon all failed to match his pace.  Dixon nearly took the pole, but couldn’t match his own pace on the second lap and settled for third.

It wasn’t enough to hold off Castroneves, who used a tactic that Ed Carpenter established early in qualifying, which was to maintain a relatively low speed on the warm-up lap, in an effort not to wear out the tires too early, and then blister the two that mattered.  The pole is Castroneves’ 41st of his career.

Penske teammates comprise the front row with Josef Newgarden, who earned a surprising third-place spot, joining them on the three-wide grid.  Takuma Sato, also a shocked the field and will start fourth, with the hottest driver in IndyCar, Scott Dixon sitting in the middle of the second row with with Charlie Kimball on his outside.

Will Power had posted the fastest time in the practice earlier in the day, hitting 221.389 mph, but struggled in the high temperatures.  Coming off his first lap, his no. 12 slid up towards the wall and proved to be the issue that would prevent any chance of him qualifying near the front.

“Could have been a much better qualifying, just was as bad as it could be,”  Power said.

When asked about the track and qualifying in the middle of the day, Power stated that, “It’s a lot different, a lot lot different.”

Simon Pagenaud, sitting third in the standings, and who had a short day in this race last year after a wheel fell off and ended his run, qualified 13th.  He remarked that the comparison between qualifying in the heat and racing tomorrow “should be a lot easier, should be good racing.”

Castroneves stated about starting on the front, “it certainly helps, but it’s not everything.”  He also pointed out that the heat made things truly difficult because in the heat, “we lose about 100 pounds of downforce.”

Castroneves enjoyed a moment of levity when asked about where his teammate Will Power is starting.  Power had earlier commented that he’d prefer to start either at the front or in the very back, to which Castroneves said, “well I guess he got his wish.”

Castroneves also pointed out that he’s not just racing Power, that there are twenty other drivers out there who are also looking to win.  Castroneves needs maximum points, whereas Power does enter the race with a 51-point lead, now 50, after Castroneves earned a point for taking the top spot.

One of the questions that needs to be asked is the reason for IndyCar holding qualifying when it did.  The middle of the day under the summer California sun is first, not that conducive to putting on the best show.

Ryan Hunter-Reay noted after his run that the drivers didn’t get time to practice in the heat and that they didn’t receive enough tires if that would become an option.

The question that IndyCar will have to address is qualifying for the race.  Drivers complain about everything but when fans stay away to avoid the heat then it’s a different problem.  For a sport that needs to maximize its fan interest, it’s something requiring further examination.

In addition, moving the race from mid-October to Labor Day weekend may also be something to follow.  The NASCAR series used to run in Fontana the same weekend with declining results.  Californians may just have other things to do on the long weekend and find racing not to be a priority.

That concern aside, the varying starting positions of the championship contenders makes for interesting storylines for tomorrow’s race.  Can Power race to the front?  Will he be caught in someone else’s mess trying to do so?  Will Castroneves pace the field and run away with the race?  Can an underdog like Pagenaud sneak into the mix?

All of the questions aside, the champion will be awarded the Astor Cup tomorrow night and the race will surely be entertaining – throwing 22 drivers out on a track where they can average over 200mph while driving without fenders makes it difficult for the story not to be compelling.