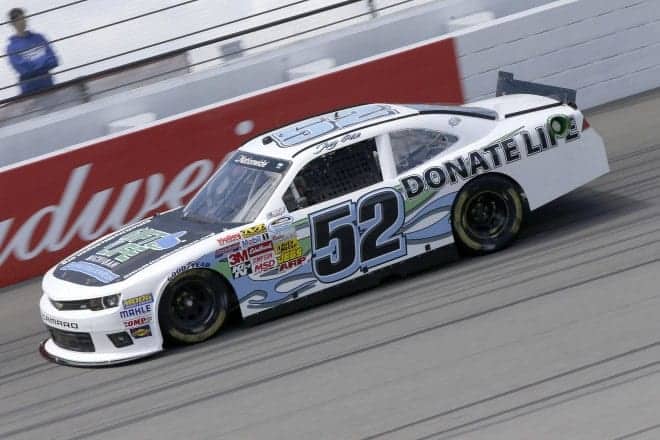 After multiple years in the Nationwide Series, Joey Gase is getting set to make a jump to the big time.

The 21-year-old driver plans to make his NASCAR Sprint Cup Series debut, racing for Go FAS Racing in the MyAFibStory.com 400 at Chicagoland Speedway on Sept. 14.

“I am very excited and thankful that Archie and the entire team are giving me this opportunity,” Gase said in a statement. “My Nationwide Series career started with Go FAS in 2011 which led to a great 20th-place finish. Hopefully I can get another good finish with the team on the 14th in my first ever cup start.”

Although the team does have multiple associate sponsors, Gase is still searching for a primary sponsor to accompany his efforts.

This season, he is racing for Jimmy Means Racing in the NASCAR Nationwide Series. Marking his first full season in NASCAR competition, the Iowa native is still searching for his first top-10 finish. In 66 career starts, he has a career-best finish of 11th coming at Talladega Superspeedway earlier this year. His best finish in a non-restrictor plate race was a 19th-place result at Kansas Speedway in 2012.

Go FAS Racing has utilized Travis Kvapil as its primary driver in 2014, but Blake Koch, Boris Said, Eddie MacDonald, JJ Yeley and Terry Labonte have each sat in the driver’s seat of the No. 32 Ford Fusion as well this season.

Racing for Go FAS Racing will reunite Gase and team co-owner Archie St. Hilaire. Prior to Hilaire’s partnership with Frank Stoddard, he owned Go Green Racing in the Nationwide Series, and notably made a jump to the Sprint Cup Series for multiple events in 2012. Gase raced for St. Hilaire for a total of 13 events, spanning 2011 until 2013.