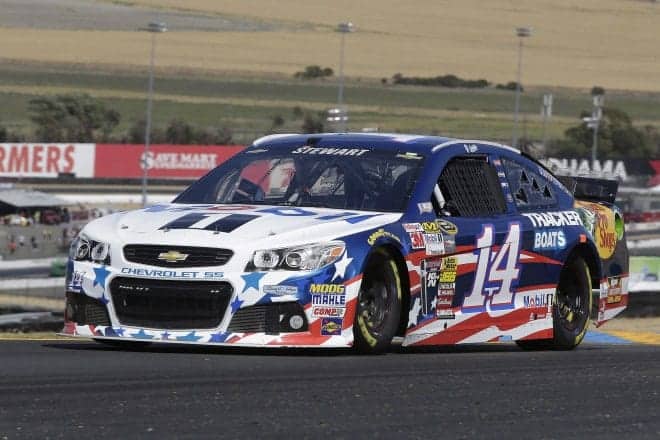 For the first time since a tragic sprint car accident took the live of 20-year-old Kevin Ward, Jr., Tony Stewart will return to the racetrack to compete in this weekend’s NASCAR Sprint Cup Series race at Atlanta Motor Speedway.

Prior to the beginning of Friday’s practice sessions, Tony Stewart and Stewart-Haas Racing‘s Executive VP Brett Frood spoke to the media during a press conference.

An emotional Stewart wrote a brief statement by his own hand that he read during the press conference. He left the room as soon as he finished. During his comments, Stewart said, “This is a sadness and a pain I hope no one has to experience in their life … This will affect my life forever.”

Stewart also went on to say that he would not answer questions as a result of the ongoing investigation surrounding the crash–which will continue on for at least another two weeks–but did say that there would be a day where he would be able to address the situation. In the statement, he also addressed Ward’s family members by name and Frood said later that Stewart sent flowers and a card to the Ward family around the time of the funeral service.

Stewart missed the last three weeks of racing competition after the incident at Canandigua Motorsports Park. Stewart was competing in a sprint car race at the track when Stewart and Ward made contact. Ward’s car hit the outer wall and the driver proceeded to get out of the racecar. Visibly frustrated, Ward approached the racing surface and gestured angrily as Stewart approached. Stewart struck Ward as he passed by. Ward was later pronounced dead.

As of now, Stewart is ineligible to compete for the Chase for the Sprint Cup as he has not attempted to qualify for each race. The possibility still remains that NASCAR could provide an exemption. NASCAR President Mike Helton will hold a press conference later this afternoon to address the situation.

The full Stewart statement can be found below.

“This is one of the toughest tragedies I’ve ever had to deal with, both professionally and personally. This is something that will definitely affect my life forever. This is a sadness and a pain that I hope no one ever has to experience in their life. That being said, I know that the pain and the mourning that Kevin Ward’s friends and his family have experienced is something that I can’t possibly imagine. When Kevin’s father, Kevin, Sr., and his mother Pam, and his sisters Kristy, and Kayla, and Katelyn to know that everyday I’m thinking about them and praying for them. The racing community is a large family, as you guys know and everyone’s saddened about this tragedy. I want to thank all my friends and family for their support through this tough and emotional time and the support from the NASCAR community, my partners, and all of our employees has been overwhelming. I’ve taken the last couple weeks off out of respect for Kevin and his family and also to cope with the accident in my own way. It’s given me a time to think about life and how easy it is to take it for granted. I miss my team, my teammates, and I miss being back in the racecar. I think being back in the car this week and being with my racing family will get me through this difficult time. I also understand that all of you have many questions and want a lot of answers. But, however, I need to respect the ongoing investigation process and cannot answer questions at this time. Emotionally, I’m not sure if I could answer them anyway. I’m here to race this weekend and I appreciate your respect and there will be a day when I can sit here and answer the questions. Thank you.”

Welcome back Tony. I personally, have missed you. Good luck Sunday.